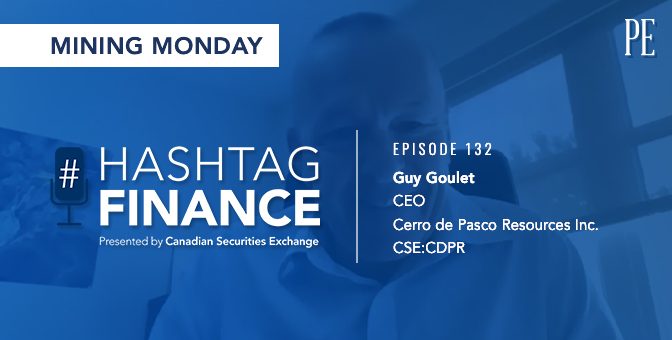 On this episode of #HashtagFinance, CSE’s Barrington Miller talks with Guy Goulet, CEO of Cerro de Pasco Resources Inc. (CSE:CDPR) and how the company is focused on applying the latest technology in the production of commodity metals through the treatment and reprocessing of all material resources, dumps, tailings, mining waste and more in order to secure long-term economic prosperity in Peru.

Here’s an overview of what they cover in this podcast:

2:03 – Mineral rights by the numbers.
4:41 – Prospects for the mining sector, gold and silver specifically.
6:39 – Guy’s last visit to Cerro de Pasco.
8:20 – How raising $50M is easier than raising “small” money.
10:46 – Cerro de Pasco’s history including the largest copper stock in the world.
11:34 – Why processing tailings is easier than mining rock.
14:06 – How Guy utilizes his background as a geological engineer in the capital markets.
16:58 – The Cerro de Pasco puzzle and how it comes together.
17:42 – Why he needs to remind stakeholders that its a remediation project, not a mining project.
21:31 – The latest development including their merger with Volcan Compañia Minera S.A.A. 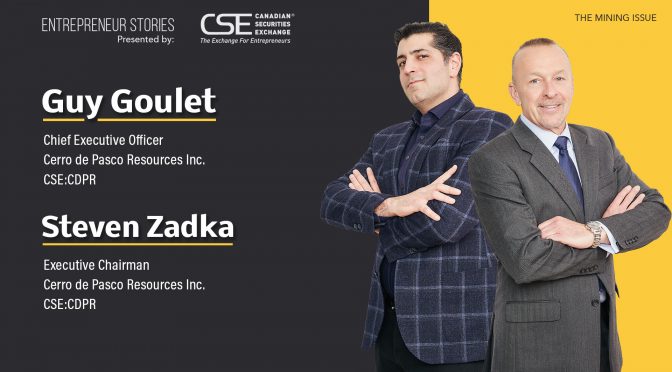 Cerro de Pasco is a centuries-old community nestled high in the Andes Mountains of Peru, but after nearly 400 years, a local mine that once brought prosperity must rethink a path forward in alliance with the nearly 50,000 people who now live there.

What began as an underground operation became an open pit at the centre of a growing population of miners and their families. Outdated mining technology resulted in inefficient yields. Tailings and stockpiles grew, and contaminated dust and water crept into surrounding areas.

There’s a huge economic opportunity in the tailings and stockpile at the site, though, not to mention known in-situ resources, 11,000 hectares of concessions, and unexplored areas.

But Cerro de Pasco Resources (CSE:CDPR) wants to do more than make money.

Chief Executive Officer Guy Goulet and Executive Chairman Steven Zadka have a vision that, if everything goes right, will see parts of the population relocate away from certain areas to new locations with clean drinking water, heat in their homes, and well-paying jobs – for the benefit of all stakeholders.

The company bought the mineral rights to the tailings and stockpile in 2012 and in November, inked a deal to acquire the mine itself and all accompanying infrastructure. Public Entrepreneur caught up with Goulet and Zadka as they began transitioning the company into production, initiating a multi-decade plan to revitalize a mine and restore a city.

Tell me about your background in the mining industry and how Cerro de Pasco came to be.

Zadka: In 2011, through my capacity as an investment banker, I came across the opportunity to buy the mineral rights on the tailings and stockpile in Cerro de Pasco and decided to jump on it.

Guy was running a company called Maya Gold & Silver in the early 2010s, and I was one of the bankers. He closed a very difficult client of mine and had incredible energy, so I said, “This guy knows how to do things.” He left that company in 2017 and I reached out.

Goulet: I was working in Morocco, and Steven approached me while I was on my way out, following the restart of a silver mine there.

We teamed up to accelerate the development of the project and list the company on the Canadian Securities Exchange.

I’m also attracted to pro-environmental projects. In 2000, I co-founded H2O Innovation, which is the largest water treatment company in Canada as of today.

What are we looking at here in terms of metals? What’s the game plan on the mining side?

Zadka: I knew that there was silver, lead, and zinc. And I discovered that there was also copper and gold in the tailings. The grades are pretty good, both because they’re old and they come from one of the richest mines in the world.

You’ve got material, metals literally sitting on top of the ground, which is much less expensive than traditional exploration.

We’re buying two subsidiaries that are producing and permitted. For 2019, we estimate their revenues were about $120 million combined.

Permitted capacity is about 20,000 tonnes per day on sulfides and right now, it’s doing 7,000 tonnes a day, and once we bring these tailings into production, the annual revenue starts getting into the $250 million to $300 million range.

With all the resources we have and what we’re acquiring, we have a 17 year mine life. But the reality is that the mine is going to go for much longer because there’s 11,000 hectares of concessions and areas that are largely unexplored.

Goulet: Post-acquisition combined, Cerro de Pasco will be the largest holder of silver in one single site. There is a need to increase the current production capacity up to its permitted level of 20,000 tonnes per day.  We estimate this will require about $35 million of capital. Once production levels are up, cash flow will start to generate rapidly.

We’re in the process of raising the capital required for the first phase, which is $65 million USD.

You’ve called Cerro de Pasco a resource management company. What does that mean?

Zadka: A traditional mining company is only focused on extracting metals from the ground. That’s what mining is; it’s going into the ground, digging up dirt, and putting the waste somewhere.

We call ourselves a resource management company because we plan to do more than just mining. There are some aspects of mining at Cerro, but there’s other aspects involved.

For one, we’re reprocessing the materials that are sitting on top of the ground, which is not theoretically mining. There’s also storage of waste.

With that in mind, how is resource management going to help the people of Cerro de Pasco?

Zadka: We’ve been completely open and transparent with the community and the local government. We’ve told them the truth, and the truth is that this is a mess that can be turned into an opportunity with some reorganization, planning, and support from the local authorities and community.

The government acknowledges that Cerro de Pasco is laden with lead, and they have a plan to relocate sections of the city 30 kilometres away from the mine. What they need in order to do that, amongst other important factors, is support from the most important economic driver in town. That’s us.

Peru has a program called “Obras por Impuestos,” or taxes for works, that enables a company to use taxes generated from operations to fund infrastructure projects for the benefit of society. You can fund roads, sewer lines, hospitals, and schools.  One of our main objectives is to do just that.

We also want to take it a step further. None of the cities in the Andes Mountains have heat, and it’s freezing every night. We have so much pyrite, which produces heat on its own, that we can harness to produce hot water and we could pump that hot water through the city.

Goulet: We want to do more water treatment systems and educate the young people to wash their hands before they eat. We want them to play in parks where we’re going to renew the topsoil.

I come from Thetford Mines in Quebec, which was the world capital of asbestos. You know what I was doing as a kid? I was going with my bike and playing in the dumps. In Cerro de Pasco, we want to avoid that.

There is a problem of contamination in Cerro de Pasco, but just as important is the problem of poverty. That mine used to employ 7,000 people.  Some 1,200 work there now in some capacity. In an area that is 4,400 metres high, what else is there to do for work besides mining?

Let’s recall that the problem of contamination is not mainly due to mining activities. The old city is located on a geological natural accident: a massive intrusion of lead, zinc, copper, silver, and gold. A “mine” is what it’s called today! And the population has been living from that operation over the past 400 years.

We want to help solve that problem of poverty and restore prosperity in the community.

The company is listed in North America, but what does your management team look like in Peru?

Zadka: I’m based in New York, and Guy’s based in Canada, but the heart of the management team is in Lima and Cerro de Pasco.

Everybody that works with us has a very special drive, and I don’t think you find that at other mining companies because this isn’t only about making money. Here, we’re trying to make a difference.

Goulet: We’re going to spend $58 million over the next four years on HSEC (Health, Environmental, Social and Communities). We have a social license, which is essentially a vote of confidence from a key component of the population that agrees with our business plan. That’s an important asset in Peru. We received positive signals from the Minister of Energy and Mines, the local government, and the President himself.

Can an environmental restoration project like this also be profitable?

Zadka: There are multiple benefits to the local population and the environment, but at the end of the day we believe this is a very compelling investment.

Not surprisingly, investors are cautious about tailings and stockpiles because they tend to be a finite resource. They would not normally offer the opportunity to find something above and beyond expectation that could make the stock go up by 10 times overnight.

However, Cerro de Pasco not only has 170 million tonnes of reserves in the tailings and stockpiles, but also 140 million tonnes of material in the ground and 11,000 hectares of concessions in one of the most prolific mining districts in the world, which has never been properly explored.

We’re talking about almost 1.6 billion ounces of silver equivalent.  That would be the biggest amount of silver in one location on the entire planet. Nobody else has that.

Seventeen years from now, a large portion of the population won’t be living in Cerro de Pasco anymore. They’ll no longer be affected by the hazards of the area.  They’ll have access to clean water and live in proper homes.

There are still two approaches to mining. There are companies that try to skirt ESG-related issues, and there are those that see the opportunity to deal with these issues head on.

We aspire to be a leading example of why you shouldn’t run away from these problems. If you’re innovative and you’re willing to go the extra mile, you’re going to have a much better impact on the outcome. Cerro de Pasco needs that outcome. 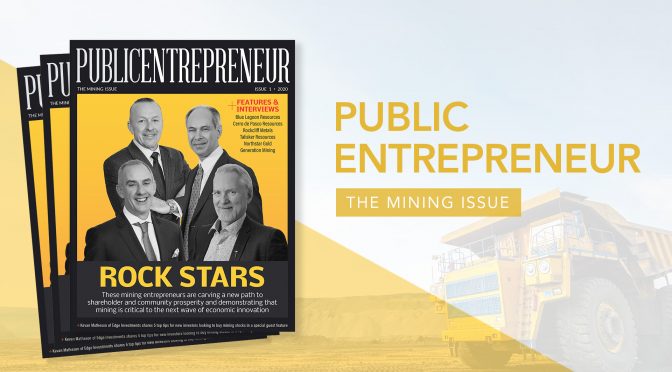 Welcome to the latest issue of Public Entrepreneur magazine, your source for in-depth stories of entrepreneurs from a wealth of varying industries.

In this issue, we dig into the mining and exploration industry to take a closer look at how the balance between pursuing economic expansion and ensuring economic stability demonstrates the importance of mining to the economy.

CSE-listed companies featured in this installment include: