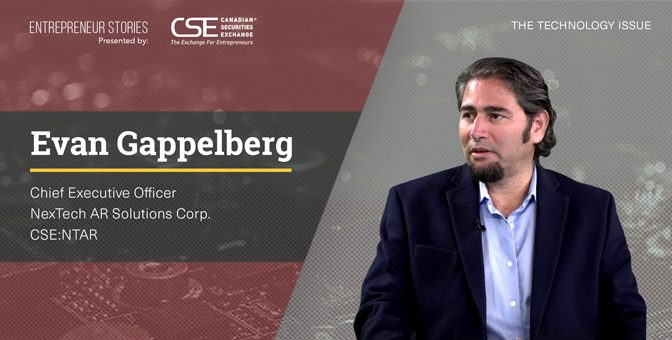 Imagine you are shopping online for a new couch. You find one you like, but it is hard to know if the colour quite matches the rest of your furniture, and the retailer’s website only has a 2D photo of it from the front.

Now imagine being able to view and rotate the couch in full 3D and use your phone to project a volumetric image that you can place, pinch, zoom and walk around, right into your living room.

That’s one example of how augmented reality is changing the way people shop, and shopping is just one of four verticals NexTech AR Solutions (CSE:NTAR) is pursuing in the sector.

Chief Executive Officer Evan Gappelberg calls it “ARitizing,” and his company has done it to everything from furniture to firearms to human holograms.

A self-described crazy entrepreneur looking for the next trillion-dollar megatrend, idea or industry, Gappelberg prides himself on identifying the next big thing. He has invested in dozens of successful ventures and led companies in the software and cannabis spaces, and three years ago he found his latest muse, augmented reality.

Augmented reality is a new concept to most people. Tell us how NexTech AR was formed and why you became interested in the industry.

I spent 30 years on Wall Street, and on Wall Street you always have to identify the hot stock in the hot sector. In the 1990s, it was the internet. Then energy and real estate took centre stage in the early 2000s. And then in 2008 the iPhone kicked off a paradigm shift, with mobile phones creating an entire new industry and stock sector called social media. Then, in 2015, everything switched to cannabis investing. Now and in the 2020s, technology, and specifically AR, AI and IoT, will create new billion-dollar companies seemingly overnight.

To be a successful investor I have followed the flow of money, which has made me kind of a generalist. If oil and gas is a hot sector, I do a ton of industry research and I become an expert in everything to do with oil and gas. Same for technology, healthcare, social media, etc. I research industries as I get deeper into them, and I start to understand how they work, which makes investing life interesting since I’m always learning something new.

I identified cannabis as the next big wave in 2011. It took a few years, but I brought in seed capital for a cannabis company that went public in Canada in 2016, and in 18 months it went up by 40 times. It was about identifying the trend and getting in before the big wave, then riding the wave, although to avoid a round trip you need to be able to see if the sector you are in is about to go through growing pains or get disrupted. Most of my investments are not buy and hold, although I did take a gaming company called Take-Two Interactive Software public in the 1990s, and today it has a $15 billion market cap. That was one I should have held.

Not to say I haven’t had my fair share of mistakes, but I do have a solid track record of picking industries that really have the potential to be grand-slam-home-run investments.

That brings us to augmented reality. I was introduced to AR in late 2017, and as soon as I saw it I knew that it was going to be the next big thing.

To take advantage of the coming AR megatrend, I founded NexTech AR Solutions in January 2018. Our first product was ARitize, which is an app that went live in 2018. It’s a white label AR app that we are having a lot of success with. It can create AR experiences and allow us to demo augmented reality to our enterprise clients. So that is how we got started.

As CEO and Founder of NexTech, I put my money where my mouth is by investing in my own company. I have invested millions in NexTech, and currently I take 100% of my salary in stock, plus I have made four purchases of the company’s shares this year alone. The only reason to do that is because I think the company is going to be worth a lot more over the following 12 to 24 months.

How does your technology augment a user’s reality?

We were first to market with a webAR e-commerce solution, which we launched in early 2019. It allows customers, on any web browser without requiring an app, to just click on a web icon and view a 3D model in augmented reality. And if they are on a mobile device, the product shows up as an AR digital twin.

We recently signed up an eyewear company, Clearly.ca, and are ARitizing seven different styles of glasses for them. We’ve created a special 3D/AR advertising platform where you can put your face up to your phone or up to your computer screen, and the glasses will appear on your face, so you can try them on virtually before you buy.

It sounds as if the possibilities are endless. What does the business model for such an evolving technology look like?

It’s a SaaS business model. You can download the ARitize360 app for free, and then after that you pay for usage. It can cost as little as $40 to $99 for an AR scan, and the goal is to get it down to $10 to $20 per scan. If we can do that, we expect to see mass adoption.

The cost has to do with human touch-up, as the less interaction there is with the asset, the cheaper it is. We are currently the only company that has virtually zero human interaction, so nobody needs to touch it.

Businesses can then use those assets on our 3D/AR ad network, which launched this year.

Most medium-sized businesses are spending $50,000 a month on ads, and we have proven that 3D ads generate a 300% increase in conversions. We have done testing on an e-commerce site we own, vacuumcleanermarket.com, and the 3D ads we ran brought a 300% jump in sales.

And if you can grow something 300% by switching to our ad network, you are going to do it. We get a percentage of those dollars, so it’s less about how much money we make on the 3D asset itself and more about how companies use that asset to drive sales for their business.

The COVID-19 pandemic is affecting companies in different ways. What has it meant for NexTech so far?

Well, we had a platform called ARitize University, which has morphed into our recently acquired InfernoAR virtual events and video conferencing platform, which is surging right now.

InfernoAR is the only platform that offers virtual video conferences with augmented reality. So, if you’re watching a presentation and there’s a product on the screen, by using our ARitize app you can take your phone and scan a QR code, which literally pulls out of the screen whatever product it is you’re viewing and places it in the room with you. We see this as transformative new technology.

InfernoAR is booming. Because so much has been shut down by COVID-19, governments, businesses, universities, healthcare providers, really everyone is looking for a way to communicate remotely, and we have the only immersive platform driven by our AR that allows you to create human holograms or to have 3D/AR product views, all built into this video conferencing platform.

It’s funny watching people try it for the first time, because they will literally press their nose against the screen of their computer to get a closer look. I literally see them move all the way in, because they cannot believe what they are seeing.

We recently doubled our sales force, as we continue to sign up new customers, and we expect to double it again this year. Because we are in the fastest growing market sector, which is the technology sector enabling the work-from-home and shop-from-home paradigm shift, our business really has the potential to explode and grow exponentially, similar to the way that Zoom has grown recently. Zoom just reported that revenue grew 169% for their last quarter, while we reported 169% growth for last month alone, so similarities do exist.

You clearly have unique products that fit the times. How are sales going?

We had record revenue and record gross profit in the month of May. We saw $1.3 million in revenue and $800,000 in gross profit, which is a 169% increase year over year on the revenue side and a 290% increase on the profit side.

We are firing on all cylinders right now. Virtual events, augmented reality, e-commerce – they’ve never been stronger. And we see that trend continuing. June should be better than May, and July better than June. We are projecting $15 million to $20 million in revenue in 2020, and possibly double that in 2021, up from $6 million in 2019.

It goes without saying that a company such as NexTech is constantly evolving. What’s on your radar for the next little while?

There are a few things on the horizon. First is to continue to succeed with our virtual video conference platform and build up our sales force.

We also have our 3D/AR ad network that is starting to gain traction and show sales wins, so we are going to have to build a team around that and allow it to scale.

Lastly, we are looking at acquisitions. We have made four acquisitions since we went public, and we continue to look for more.

There are some exciting opportunities out there in the world of augmented reality. There are a lot of little start-ups that would fit right in with NexTech and help us to push our technology forward without having to spend time and money on development costs. 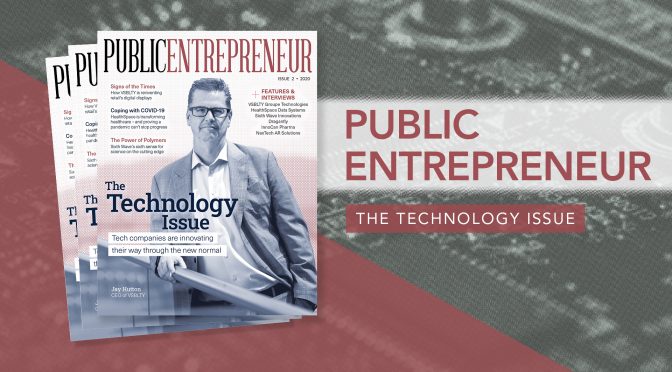 While social distancing measures in recent months have forced individuals to stay apart, one constant has kept everyone connected: technology. In this issue of Public Entrepreneur, we examine how technology has become more important than ever in the healthcare industry and how it has proven to be vital in fighting COVID-19.

We take a closer look at how visionary leaders and entrepreneurs are harnessing the power of innovation to change the world – from enhancing video conferencing with augmented reality, to monitoring community health, to using rapid-detection technology to quickly test for the virus.

Check out the most recent edition of Public Entrepreneur here: 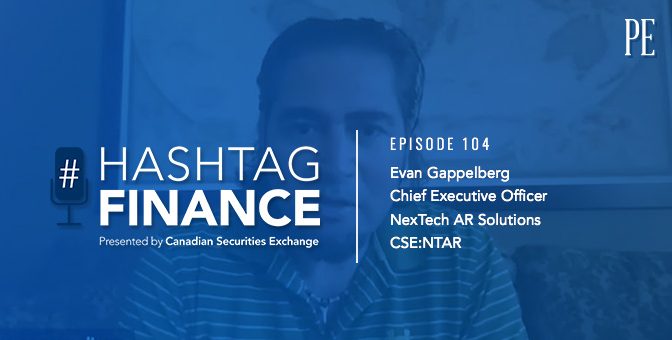 During this discussion, Evan provides commentary on the (positive) impact that the pandemic is having on his business (1:19), how their AR (augmented reality) technology fits within the shop-from home-paradigm (4:43), and his prospects for the stock market and predicted timeline for recovery (15:18).

Listen to the entire show to learn about Evan’s past history with Grand Theft Auto (the video game) and his positive experience taking a company public on the Canada Securities Exchange. 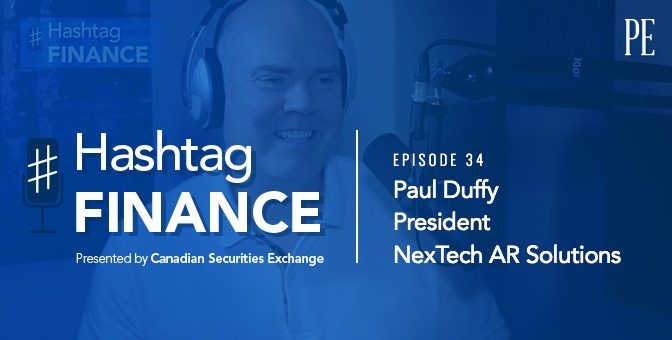 Paul Duffy, President of NexTech AR Solutions Corp. (CSE:NTAR), joins Barrington Miller to discuss the practical applications of “ARitizing” products into the augmented reality space using the NexTech platform (1:01), the differences between augmented reality and virtual reality (4:44), and how augmented reality is fundamentally changing the way people shop (12:51). Listen until the end to learn about Paul’s personal experiences with augmented reality, what’s next for AR in entertainment, and his opinions on how AR may impact social interaction within the next five years.