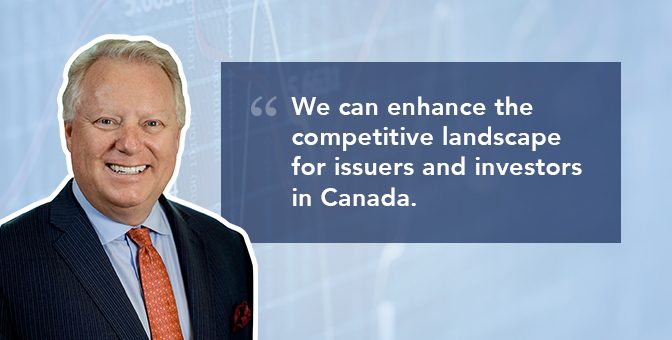 By Richard Carleton, CEO of the Canadian Securities Exchange

One of the very best aspects of the Canadian capital markets is our ability to provide funding to early-stage companies. With a successful history of financing mining and oil and gas exploration, the industry has applied its skills in more recent years to support innovation in a broad range of sectors such as technology and life sciences. This has resulted in notable recent success for companies in the legal cannabis sector.

Canada is a world leader in the provision of capital to companies from around the world in these fast-growing new industries. Recent investment themes include the development of medical applications for the treatment of mental health issues with psychedelic compounds, and backing for the rise of cryptocurrencies and supporting technologies that are driving efficiencies in the payments sphere and the provision of financial services.

As with any industry, competition in the provision of stock exchange services in Canada have benefited issuer companies and investors alike.

The Canadian Securities Exchange (CSE) launched 18 years ago with a mission to provide public issuers with a streamlined, lower-cost alternative to the Toronto Stock Exchange and TSX Venture Exchange. We succeeded. The CSE is now home to more than 700 active listings and has attracted more global issuers of greater size and maturity over the last few years than at any other point in its history.

Greater competition, including other new exchanges launched after the CSE, has clearly benefited Canada’s investment community, as well as the companies and investors that it serves.

That said, we can and should be doing a much better job of enabling competition in the provision of exchange services to companies, brokers, and investors. Here are a few examples of the challenges faced by new entrants, and some potential solutions.

In the United States, an industry consortium collects and processes real-time market information from the stock exchanges and then provides access to the data for all the securities listed on each exchange (Nasdaq, NYSE and NYSE American) for a single fee. In other words, regardless of where a particular security trades, and at last count there were 16 venues, an interested investor can “see” every trade and current quotation.

This is not the case in Canada. In an environment where almost half of the trading in TSX and TSX Venture Exchange stocks occurs on different marketplaces, investors are forced to deal with the venues individually to see the full picture. Many people, who either don’t understand our convoluted market structure, or do not want to pay these separate fees, opt to take the data from the incumbent exchange only. This leads to a series of issues:

I again refer to the experience of exchange competition in the United States. The tech giants we now know so well were essentially forced to go public on Nasdaq, because NYSE’s listings qualification rules during the 1970s and 80s required a company to have significant tangible assets. In other words, the exchange didn’t give credit to the important intellectual property assets held by the rising technology sector.

This subtle form of discrimination extended to membership in the benchmark US indices such as the S&P 500 and the Dow Jones Industrial Average: companies were required to be listed on the NYSE to be eligible for inclusion in these indices. It took many years of pressure from users of the indices to spur the index providers into changing their criteria.

We find ourselves in the same situation in Canada years later. The S&P/TSX indices, with hundreds of billions of investment dollars measured against these benchmarks, require a listing on one of the TMX Group exchanges for a company to be eligible for inclusion.

This has distorted the market in a variety of ways: companies that have grown to a size warranting consideration for inclusion in one of the S&P/TSX indices have left, unwillingly, a competitor exchange to move to the Toronto Stock Exchange. Make no mistake, the possibility of index membership is attractive to prospective listed companies.

Eliminating the requirement that a company be listed on a TMX Group exchange in order to be included in one of Canada’s benchmark indices will enhance competition in our space.

The Peculiar Meaning of “Venture Issuer”

This issue is perhaps the most subtle, yet wide ranging barrier to better competition in the stock exchange industry. Let me start with a bit of background. To promote a framework where it is cost effective for small companies to go public, regulators have created two sets of requirements for public companies: those set out in the provincial securities acts with rules for governance and reporting for larger, more mature companies, and a less prescriptive set of rules designed for so-called “Venture Issuers.”

Unfortunately, instead of identifying which public companies are “Venture Issuers” based on objective measures like market capitalization, revenues, assets or other objective measures, the framework instead defines them as issuers listed on the TSX Venture Exchange and the Canadian Securities Exchange.

This system worked reasonably well during the early stages of exchange competition in Canada. When smaller public companies reached a certain level of success on the TSX-V or CSE, they would typically move their listing to the TSX or a US exchange. At that point, they would shed the “Venture” label and be re-classified as “Issuers” for the purposes of their disclosure and governance rules.

This labelling is extremely important because “Issuers” and “Venture Issuers” are not treated equally in the investment ecosystem:

Thanks to the CSE’s recent success in attracting and retaining larger issuers, particularly in the global cannabis sector, the “normal” evolution of successful companies jumping from the CSE to the TSX has broken down. The CSE is now established as a credible home for larger, more advanced companies, which are using their CSE listings to raise serious amounts of money. The total capital raised by CSE issuers last year exceeded $6 billion, compared to about $0.5 billion in 2016. Last year’s total has already been exceeded this year. Liquidity measures also show the CSE in a superior light to the TSX-V and NEO exchanges and have exceeded the measures produced by the TSX itself for significant periods of time over the last few years.

While we are delighted that larger issuers are choosing to make the CSE their home over the longer term, the “Venture Issuer” status has become a real problem. These larger CSE-listed companies, some of which have market capitalizations in the billions of dollars, are at a significant disadvantage to comparable companies on rival exchanges that are eligible for margin relief and the other benefits I outlined above.

We could wait for the various regulators to address the competitive imbalance, but true to our nature as disruptors in the marketplace, we are tackling these problems head on.

We are in the long process of rewriting our listing policies to create two tracks for companies listed on the CSE: one for “Venture Issuers” and another for more mature companies. Under the new rules most companies will remain “Venture Issuers.” The larger and more advanced companies will, however, get reclassified, allowing them to (hopefully) enjoy the same benefits as “Issuers” on the TSX. Accordingly, they will be formally subject to a more prescriptive corporate governance regime that mirrors the policies set out for existing “Issuers” under securities law and related exchange rules.

We have worked hard with regulators to formulate this revision of our listing policies and have published the proposed changes for public comment here: https://thecse.com/en/about/publications/notices/notice-2021-005-request-for-comments-proposed-policy-amendments

The entire investment community should support our proposal. It is simply a matter of fairness and common sense. By addressing regulations that should have been dealt with years ago, we can enhance the competitive landscape for issuers and investors in Canada and ensure a strong and vibrant capital formation ecosystem well into the future.