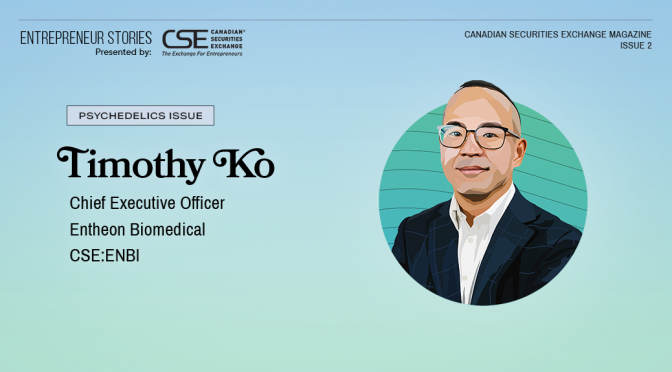 Entheon Biomedical (CSE:ENBI) Chief Executive Officer Timothy Ko speaks passionately about his company and its objectives within the burgeoning psychedelics industry, not only because he heads one of the most dynamic teams in the space, but also because he credits psychedelics with saving his life.

Following a childhood of challenges that continued into his adult years, Ko ultimately found peace of mind after psychedelic intervention enabled him to look at life differently than he had been, repair important relationships and, as he puts it, “learn to love again.”

Ko’s experience defined what is now a life mission for him. This shined through in an eloquent and authoritative discussion with Canadian Securities Exchange Magazine in mid-September.

It would be difficult to come out of a conversation with Ko not believing that there is something to psychedelic treatments for those working to overcome mental illness. It’s no longer about masking or dulling symptoms, but rather probing the drivers of problematic behaviour and replacing closely held, harm-inducing beliefs with new, healthier ones.

The specifics are best conveyed in Ko’s own words.

Entheon is researching and developing products to help treat addiction. There are already products on the market that are used for this purpose. What are you trying to achieve with your treatments that existing alternatives do not?

I think before I answer that directly, we first have to look at the treatment landscape for addiction as it currently stands. When we assess treatment options available for various addictions – be it tobacco, alcohol, or things like opiates – we see a rather bleak landscape where many of the treatments, though widely available, are not particularly efficacious.

And looking at the population, it is estimated that, globally, over 2% of the population struggles with an alcohol or illicit drug addiction. In spite of the options currently available for addiction recovery we still see hundreds of thousands, if not millions, of people die every year as a result of tobacco, alcohol and opioid use disorder. The reality is that many people are rendered treatment-resistant over the course of multiple failed attempts to address their condition.

Entheon believes that we can provide better outcomes for people who have not been helped by previous types of treatment. In our estimation, the treatment-resistant form of addiction is more common than generally thought, and Entheon treatments are designed for people for whom other forms of treatment have failed.

Entheon focuses on a fast-acting hallucinogenic known widely as DMT. Does DMT have advantages over other psychedelics for addiction treatment?

It’s important to demystify what psychedelics do. A really important observation of ours with DMT is that there is a feature that is present in other psychedelic molecules called entropy. Psilocybin, LSD and DMT can induce a state of heightened entropy, or randomness.

That might sound like a bad thing, but when you look at people with pathological conditions, there is often a degree of tunnel vision. These pathologies make it such that a severely depressed person, or an addicted person, is unable to look outside their normal frame of reference. Their reactions to stimulus or experiences are pre-determined, so you have this immobile state where they cannot envision a life outside of the one they have already experienced.

What DMT and other psychedelics do is to promote a state of hyper-connectedness. They allow individuals undergoing psychedelic treatment to enter a highly neuroplastic state that enables them to have entirely new experiences. In combination with therapy, they are able to experience old traumas, belief systems and memories, and rather than go to their pre-defined pathological reaction set, they are able to have perceptions that reshape their experience in a more positive way.

Where DMT is different is that it is very well metabolized by the body, which means the experience is short. Psilocybin is a bit of an unwieldy type of molecule to work with, as it is very powerful and the length of engagement is six to eight hours or longer. That window of engagement is commercially difficult to manage. And because these are such powerful experiences and the individual is often dealing with inherently difficult subject matter, the risk of an overwhelming experience is amplified.

With DMT, we can still facilitate powerful transformational experiences, but you have the benefit of being able to limit them to 30, 60 or 90 minutes. If we need to, we can stop the experience altogether and that person can return to a functional baseline in 10 to 15 minutes. If a person is having a difficult time with psilocybin, however, they are on that rocket ship for as long as the rocket has fuel.

The way Entheon sees the industry evolving is that there is a broad array of psychiatric conditions, as well as a broad spectrum of individuals appropriate for psychedelic use.

What we are doing with Entheon IQ is taking a data-focused approach to look at what individual factors make different drugs and different treatment types appropriate for different individuals. We have acquired a company that has a genetic test that looks at a variety of mental health risk factors based on genetics, as well as a function of metabolic factors that dictate whether a person is more or less likely to have a strong or weak response to drugs. We believe genetics is a very strong component of ensuring that appropriate treatments are prescribed to the right people.

Without generalizing too much, Entheon IQ and Entheon DNA are working to create biomarkers to help predict and direct appropriate treatments for individuals across a broad spectrum of psychedelic molecules and psychiatric disorders.

Talk to us about your business model. At what point does monetization become a reality, and how do you scale the business?

I think that’s a question that the entirety of the psychedelic drug industry is looking at. The reality is that, as promising as the research is, in the interest of patient safety these development processes are bound to regulatory processes of governing bodies where we seek to commercialize.

We will need to make it through various stages of clinical validation, then have conversations with regulators and ensure our research is done in such a way that the data is irrefutable and highly understandable to the authorities that ensure these products are safe and effective.

The development timeline as it pertains to this approval process is five to 10 years, and we believe that we can have a timeline on the lower end of that range.

But in an earlier time frame, we think the development of tools to service the ketamine space should commercialize sooner.

You have a strong and growing advisory board of accomplished professionals in the addiction treatment space. Tell us how you choose new members for your team.

Our advisory board is among the best in the industry. It is populated by some of the most prominent and well-researched members in the psychedelic research space.

The psychedelic industry is under the general umbrella of science, yet it is highly specialized and the pioneers are limited to a very core group. When we started Entheon, we wanted to make sure we worked with minds that understood the unique properties of psychedelics better than other scientists.

Unlike other medicines that work in respect to brain chemistry, psychedelics take into account poorly understood features of the human psyche that are only now beginning to be characterized. We really wanted to select advisors with the most comprehensive understanding of the features of psychedelic medicine.

Let’s close with a look at the industry in general. Do you come across misconceptions in the broader audience that you feel need to be cleared up?

The stigma associated with psychedelics often unfairly highlights radicalism or esoteric belief systems. There was a comprehensive anti-drug policy in the 1960s and 1970s that sought to vilify psychedelic drugs as potentially catastrophic to society and having no therapeutic value.

Rather than us having to dispel these myths, I think the research is truly bearing out a rebuttal to the notion that there is no therapeutic value to psychedelics. With each passing month, we see more research that shows huge transformational capacity to help people with end-of-life anxiety, nicotine addiction, as well as major depressive disorders.

We exist within a very interesting moment where on a purely scientific basis, not only are these substances not addictive, harmful or detrimental, but they may actually be the molecules with the therapeutic potential to disrupt a system that has seen very little innovation in the past few decades.