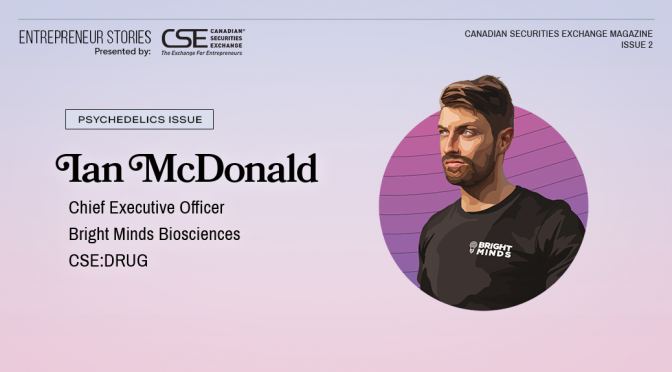 With the COVID-19 pandemic upending life in every corner of the world and putting unwelcome pressure on people vulnerable to depression, suicide and addiction, there has never been a better time to consider new treatments for mental health challenges. One field gaining particularly rapid traction is psychedelics.

Of course, substances such as LSD and magic mushrooms have been around for years. They are known for their “mind-altering” qualities, both positive and negative, but in many ways the chemical properties of these compounds and their potential to benefit the brain are only just beginning to be understood.

Bright Minds Biosciences (CSE:DRUG) is a biotech company at the vanguard of this movement. Bright Minds is developing the “next generation” of non-addictive psychedelic medicines to treat depression and other neurological conditions and aims to offer an alternative to today’s standard treatments such as selective serotonin reuptake inhibitors (SSRIs), of which the widely known Prozac and Citalopram are but two examples.

“There haven’t really been any new ideas in the last 30 years or so,” says Bright Minds Chief Executive Officer Ian McDonald, who added that while revolutionary when they emerged in the 1990s, SSRIs have not always been best for patient outcomes, as side effects can include weight gain and sexual dysfunction.

SSRIs, he noted, might not work at all, or can even be problematic, for patients suffering from the most severe forms of depression, or people struggling with post-traumatic stress disorder (PTSD).

McDonald is convinced that psychedelics is the most promising field for making progress over the next 20 or 30 years in psychiatric medicine, and that related treatments will help the people most deeply affected by such disorders.

With this in mind, Bright Minds has a portfolio of three patented mechanisms based on serotonin (5-HT) receptors that are being assessed for indications ranging from depression to chronic pain. And with $30 million raised to date, the company is fully funded for Phase 1 trials for two of its drugs, which are due to begin next year.

McDonald is a former investment banker who started getting interested in psychedelics in 2014. He read all he could on the subject and concluded that while the efficacy of such drugs was not in question, they lacked the characteristics needed for the medical establishment and Big Pharma to embrace them.

Bright Minds aims to refine what could be seen as “coarse” substances and repurpose them. To do so, McDonald has assembled a top-notch team of scientists and researchers with extensive backgrounds in pharma and drug development.

Bright Minds Co-Founder Dr. Gideon Shapiro, for example, has over 100 patents to his name and is a leading commercial scientist creating novel psychedelics. He served as head of the Alzheimer chemistry group at Sandoz, the company first responsible for discovering LSD and marketing psilocybin, while Bright Minds’ Chief Scientific Officer and organic chemist Dr. Alan Kozikowski is world-renowned for his work with psychoactive substances.

“We’re not trying to reinvent the wheel,” says McDonald. “We’re taking compounds that already work and making them better. We’re sanding down the rough edges and polishing them up. I’d say it’s a much less risky approach than a lot of other biotechs who are doing a completely novel mechanism and where there are questions on efficacy.”

It is also worth highlighting that Bright Minds already has “composition of matter” patents covering all of its new chemical entity (NCE) portfolio, giving it a full monopoly over its drugs for 20 years. This approach is more akin to Big Pharma companies, which patent the molecules they invent.

Older drugs such as LSD and MDMA cannot be patented, and some companies simply pursue weaker patent strategies, according to McDonald. For example, they attempt to patent a method of production or the source of a compound. But these can easily be worked around by skilled chemists and may only offer an exclusivity period for five years, after which they become so-called generic drugs.

A drug maker’s profitability is at stake here. McDonald points out that potential revenue for a patented drug for depression, for example, could be between US$10,000 and $30,000 per patient per year compared to around $400 per year for a generic drug.

Indeed, the global market potentially open to Bright Minds is enormous. Antidepressants alone are expected to be worth $16 billion a year by 2025. And McDonald says this figure was based on generic depression drugs. For a patented one, based on the number of patients multiplied by $20,000 a year, the figure reaches an eye-watering $600 billion.

People who do well taking SSRIs will likely stick with them, McDonald concedes, but for that third of the patient population who do not, there is a potential market for alternatives of $200 billion.

The Bright Minds portfolio is already garnering attention. The company is partnering with the US government’s National Institutes of Health to test its drugs for epilepsy and chronic pain, not least to offer an alternative to opioid drugs in the latter case. McDonald says early findings have been encouraging.

In August of this year, the company reported positive pre-clinical data for its BMB-101 candidate (invented by Dr. Kozikowski) in treating the rare form of childhood epilepsy called Dravet Syndrome. This non-psychedelic drug is also being indicated as an antipsychotic for Alzheimer’s and to treat addiction disorders.

BMB-101 will be heading into Phase 1 trials early in 2022, with two Phase 2 studies potentially following in the second half. The company also aims to run a Phase 2 trial for its psychedelic candidate (5-HT2A) for depression and PTSD in 2022, says McDonald.

“We are entering a very catalyst-rich period. We have a number of clinical trials in 2022 coming up within the next year,” he adds.

Bright Minds appears to be a front-runner in this exciting new medical space and McDonald has the resources and team to see his plan through.

“We are really the leaders in this next generation of psychedelics, looking a step further I think than the other companies, and we have the team to do it – they’ve done it before, and we’re all very excited to get these drugs in the clinic and closer to patients.”