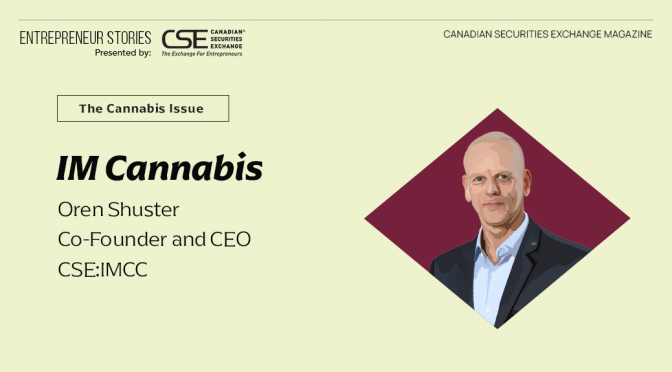 Earlier in his career, Shuster had co-founded with Rafael Gabay the Ewave software group, which was thriving with over 1,000 employees. Nevertheless, when the subject of medical cannabis came up during a meeting, Shuster’s instincts nudged him toward exploring its potential.

“We started the Ewave technology group, and I quickly focused on healthcare technology. I’ve been one of the pioneers in developing web-based electronic medical records, radiology management and telemedicine solutions. But one day, a man talked to me about medical cannabis,” says Shuster.

“As an entrepreneur, it got my attention, so I spoke with patients and doctors and collected data and feedback on medical cannabis. A light bulb went off in my head; I knew I had to do it – there’s something significant here for patients.”

With decades of experience in technology and medical ventures, Shuster then pivoted to co-found IM Cannabis, or IMC, in Israel.

In 2010, IMC sold its first batch of premium flower. The company is an outlier, and in a very good way, with operations in Israel, Canada and Germany, the world’s three largest federally legal markets.

Where most people see problems, entrepreneurs such as Shuster tend to see opportunity.

“A lot of cannabis companies went to Malta, as it was easy, but we went to Germany. A tough or challenging environment didn’t matter, as we have a strategic approach to Europe – not opportunistic,” says Shuster.

Germany legalized the medical use of cannabis in 2017. Shuster’s early push into the regulated German medical cannabis market has positioned IMC for high-octane growth as Europe’s largest economy presses ahead with plans to legalize cannabis for recreational use. German lawmakers are expected to introduce a draft bill on recreational cannabis legalization by the end of this year, according to media reports.

“We’ve laid our foundation in Germany, currently one of the largest medical cannabis markets in the world, which is expected to rapidly expand as the German government enacts broad regulatory reform of cannabis use,” says Shuster.

Undoubtedly, Germany legalizing cannabis for recreational use will be a seismic move for Europe. Tiny Luxembourg and Malta have given the go-ahead for people to grow and consume cannabis, but Germany is the continent’s biggest market.

Currently, IMC operates in Germany through its fully licensed EU-GMP subsidiary Adjupharm GmbH, which has built a logistics centre that allows it to repackage products. With the completion of the logistics centre, IMC has doubled its footprint in Germany to 8,000 square feet, upgraded its production facilities and increased its storage capacity to seven tons of cannabis.

“IMC has a very clear strategy. What we’ve done is built the supply chain which starts with premium products in Canada going to our state-of-the-art EU-GMP facility in Germany. We are building it as the hub for the EU market,” explains Shuster.

“We are in the best position to take a leadership position in the massive European market of 750 million people.”

In Germany, the IMC Hindu Kush strain has been a strong seller, helping make Adjupharm GmbH a top 10 cannabis company in the country. Adjupharm has initiated product licence applications to prepare for the launch of new high-quality THC products in the fourth quarter of this year and first quarter of 2023.

“We entered the Canadian market because we needed premium products for Germany and Israel. Our cannabis capacity in Canada is about 15,000 pounds (6,804 kilograms) annually, and we are not yet at full capacity. It’s all premium, indoor-grown Canadian cannabis,” notes Shuster.

“We are growing locally and selling in the Canadian market while supplying our other global markets. We’re also buying premium products from Canadian growers.”

IMC has launched a slew of new products in Canada in response to high demand for its WAGNERS and Highland Grow brands, which hold top-three spots in the premium and ultra-premium segments in Ontario, according to sales data from the Ontario Cannabis Store (OCS).

The WAGNERS pre-roll catalog at the OCS has expanded with the launch of Tiki Rain, Blue Lime Pie and  TRPY ZLRP pre-rolls. Two new 3.5g dried flower stock keeping units (SKUs) – Tiki Rain and Purple Clementine – were launched in addition to an expansion of the concentrate portfolio, with the introduction of soft black hash and 3.5g soap bar hash. New product rollouts include Frost Bite, Leviathan and Space Jagger, according to the company.

“There are distinct advantages to being in different markets in diverse phases of maturity. The Canadian market is the most mature, fully legalized market with a variety of products. We’ve gained insights from being in an ultra-competitive market and can carry those insights to less mature markets,” says Shuster.

“Most of our products are premium and occupy the highest category, as consumers are willing to pay more for quality and artisanal brands,” says Shuster.

While focusing on revenue growth, Shuster has also rigorously pursued cost and margin efficiencies at IMC. For its second quarter ended June 30, 2022, IMC reported C$23.8 million in revenue, a 114% increase from the same period in 2021.

IMC chalked up the jump in revenue to more medical and recreational cannabis sold at higher average selling prices per gram in Israel and Canada. The company’s gross profit, before fair value adjustments, was $5.6 million during the quarter, compared to $0.6 million in the second quarter of 2021.

“At the end of Q2, we had $5.8 million in the bank. We’ve accelerated along the path to profitability with increased revenue, operational streamlining and a focus on cost reduction,” says Shuster.

“We are seeing growth and a revenue run rate of almost $100 million annually.

IMC has launched its Canadian WAGNERS brand in Israel and plans to bring new medical cannabis products to the country later this year.

A cautious risk-taker, Shuster has connected the dots of opportunity by building a diversified company with a global cannabis supply chain.

“I take calculated risks. I never put all my eggs in one basket, which is why IMC is geographically diversified with operations in Israel, Canada and Germany,” says Shuster.

“On legalization, we are primed to target new adult-use recreational cannabis markets in Germany and capture substantial market share across Europe.” 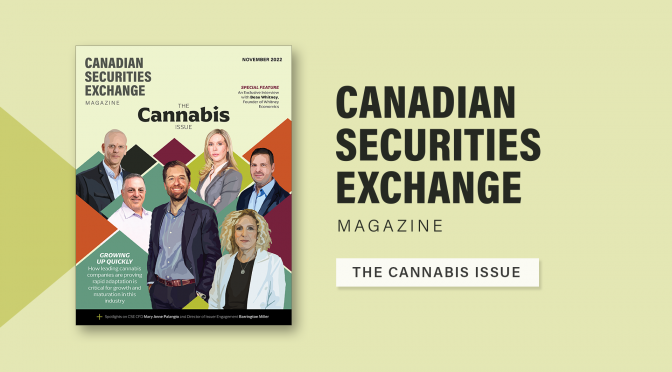 Since launching just under a decade ago, the agility of the commercial cannabis industry has been nothing short of remarkable. As the global leader in publicly-listed cannabis securities, the Canadian Securities Exchange is acutely aware of just how nimble the various stakeholders in the industry have had to be in the face of various multifaceted challenges.

In this issue of Canadian Securities Exchange Magazine, we feature executives from six of the most influential CSE-listed cannabis companies, as well as industry experts, who provide their perspectives on how the cannabis industry can maneuver through the current market conditions and where they see the industry going.