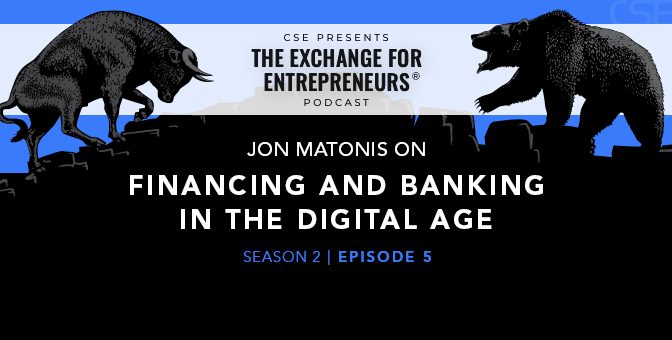 In Episode 5 of the Exchange for Entrepreneurs Podcast, the CSE’s Anna Serin is joined by Jon Matonis, Chief Economist of Cypherpunk Holdings Inc. (CSE:HODL) to discuss privacy and cryptocurrency, as well as disruptions to financing and banking in the rapidly digitizing economy.

Watch the full interview, or scroll down to read the transcript.

Cypherpunk Holdings Inc. is a Canadian-based holding vehicle, set up to invest in technologies and cryptocurrencies with strong privacy.

I have the honour of being joined today by Jon Matonis. He is Chief Economist with Cypherpunk Holdings, which is a CSE issuer. But Jon, first of all, thank you so much for joining us today.

No problem, Anna. I’m glad to be here.

That gave me a glimpse into the international payment system and how all that worked with various currencies and cards and payment instruments. Which was also about the same time that the world was moving into cryptography, because Visa then became one of the early investors into Verisign. And I moved over from Visa, going into Verisign in the payments division with digital certificates and encryption.

The whole financial cryptography area was booming in the mid to late nineties. And this is all pre Bitcoin, pre cryptocurrency. In fact, the institutions back then were looking at ways to get into the market for being their own currency issuers. You had a group at Visa that was examining how they could be a digital currency issuer by creating a Visa monetary unit, even. They were, in a way, forecasting a lot of the things that we were to see later on.

But it was that blend of finance and cryptography that was so interesting to me, that was booming at the time. And eventually just led me into being involved with digital currencies, going all the way from the mid nineties to when Bitcoin was created in 2008, released in 2009. I wrote extensively on Bitcoin. I wrote for Forbes, I wrote for CoinDesk, and I eventually joined the Bitcoin Foundation as a founding member in 2012.

I was the person behind the Bitcoin conferences that we had in 2013 and 2014. We had the biggest Bitcoin conference in the world at that time in Amsterdam in 2014. The Bitcoin Foundation today is not so much of a driving force in Bitcoin because so many other companies have taken up the task of dedicating money, dedicating developers, and dedicating promotion. But back in the early days, there was nobody that was even forming a narrative for the press. We wanted to fill that vacuum and not let the press deviate into bad press for Bitcoin.

And we were successful in doing that. That takes us to about 2015, 2016, where I, at that point, started working with various companies, as a board director, that were in the crypto space. Focusing on fintech, payments, gaming companies, but also privacy tech and the intersection of privacy tech with finance. Which led me to Cypherpunk Holdings, the current listed company.

The reason that Cypherpunk Holdings and privacy tech is so interesting in this space is that you won’t have any success with cryptocurrencies, or DeFi, or NFTs, or any of those things unless you have a solid foundation of privacy. You’re not going to have any businesses adopt things where payrolls will be public information, or you won’t have any large finance deals happening if the sensitive information is not confidential. There’s a whole entire sub-industry working to solve the privacy problem with these startups. And that’s what Cypherpunk Holdings focuses on.

First of all, it’s so interesting to say that you started working with this foundation in 2012. It’s hard to believe that Bitcoin has been around for that long, because I feel like it’s a conversation that people are finally having just within the past maybe two to three years. It’s so interesting that the stuff has been around for so long. And even your work with Visa in the nineties, which might be considered the first digital currencies that were working.

I saw you do an interview and I thought you said something that was really interesting. You said, “Money doesn’t do bad things, bad people do bad things.” And I think that’s a really interesting way to view it. I think people are afraid of privacy around currency, but you did dive into that a little bit. Can you tell us a little bit more about that?

I think you’re right. I think that government and media use the opportunity to tarnish what they want to tarnish. But if you strip it down to its essence, it’s really nothing different than what we already have. The paper cash in your pocket has the same privacy attributes that something like Bitcoin or Ethereum would have.

And mainly those three privacy attributes are: user defined privacy. You get to decide if you reveal information. The second attribute is the irreversibility of the transaction. If you give someone a $100 bill, they have it and you no longer have it. It’s irreversible. And then the third attribute is the non-traceability. You’re not able to link a cash transaction to an individual in all cases as that paper cash moves along the transaction chain.

So when we move to the digital world with something like Bitcoin, it doesn’t add any new, hidden secret privacy techniques. It’s just the same ones that we already had in the analog world with paper cash. Which I don’t think that certain “powers that be” want those same attributes to remain in paper cash, so then they become concerned that those attributes are actually able to be retained when we go digital. This really wasn’t the focus of Visa so much, but it’s a focus of decentralized systems such as Bitcoin on the internet.

The original dollar was an IOU, essentially. That’s how paper money was created. We obviously had coins that were made out of certain metals, but the original paper money was IOUs. And now we live in this digital world, so it seems to make sense that we’re entering that side of it.

Can you just tell us a little bit about some of the themes that you’re seeing in finance and banking when it comes to digital securities or digital assets? We can talk about cryptocurrencies, but just in general, what themes are you seeing? What are you seeing come to market in the banking world?

There’s so many new business models that are made possible by this technology, so it ultimately will affect every single area. We’re seeing it go with the low-hanging fruit initially, low-hanging fruit being obviously financial services in the larger sector. But focusing in further within financial services, it’s the early applications around DeFi and decentralized finance, such as lending and earning.

These are normal banking functions, but when you throw it into the world of DeFi, it automatically sometimes takes on this new glamour, because people aren’t used to it without having a physical bank or an old institution. Staking your digital assets refers to earning a yield on your current holdings. It’s just like earning interest that you would earn interest on a CD. You want to earn a yield. There’s many products that are evolving around that. And the entire yield farming market is something that’s new to a lot of people still, but it’s exploding in DeFi land.

Then on the other side of it, you have the lending business. People want to be able to use their collateral for fiat loans. For instance, let’s say that you have a Bitcoin or Ethereum portfolio. You don’t want to liquidate your portfolio, but you want to use it as collateral to get a loan in dollars or euros so that maybe you can make a down payment on a house or something like that.

And there’s a multitude of companies that are springing up to be able to do that and address that market. It’s moving so fast and so quickly that the regulators, not only can they not keep up with it, but they can barely even understand it.

Do you think that the financial institutions are resistant to this change?

Largely I do, but I don’t think it’s their fault. I think the financial institutions are resistant to the change because right now they’ve been deputized to be almost a law enforcement wing for financial surveillance. Their agenda is very conflicted.

If you go into any major bank right now and try to discuss anything about new product offerings or the future of finance, what you’ll run into is not open-minded product people, but you’ll run into a wall of attorneys. I mean, the compliance team and the legal teams outnumber the new product teams by a wide margin in banking.

Do you think that we’re going to start seeing this in all of our daily banking? For example, do you think at some point you could go to your brokerage account, deposit Bitcoin, and buy stock?

It’s funny you should say that. I think one of the brokers just announced that they’re accepting cryptocurrency deposits, that was last month. We might start seeing that sooner than you think. But absolutely, the answer is yes, and I think it’s going to be driven by the wallets. And Cypherpunk Holdings has the thesis that it will be driven by the wallets.

Which means just like the browsers steered our entry into the web and how we navigated the web, the digital wallets that people have, whether it’s on their phone or their desktop, it won’t be like a normal wallet. It’ll do so many things for you behind the scenes that you won’t even realize. That user interface is what’s going to allow this technology to go mainstream because it’s going to simplify it for the end user.

It’s so interesting. Now my final question for you, and this is a bit of a big one. Hopefully I’m not overwhelming you with an answer. Obviously we know Ethereum and Bitcoin, obviously people can create cryptocurrencies, they have the ability to do so. We also have crypto exchanges that are coming to market where people can trade these.

Excellent question. I mean, I’ve never really said that Bitcoin or cryptocurrencies is going to totally eradicate the government fiat currencies. It’s not a situation where you’ll immediately see a replacement like that. I think what you’ll see is Bitcoin keeping the fiat currencies competitive, keeping them honest, so it’ll just be another point of competition for fiat currencies.

And I also don’t think you have to be overwhelmed by 5,000 different cryptocurrencies, because there’s only going to be a handful, maybe two or three, that function as a pure store of value, which would be a currency that people want to hold onto for a store of value to use later. A lot of the other cryptocurrencies are application specific. They give you access to certain smart contract platforms, different blockchains. So we’re not getting into a world of 5,000 different stores of value. There’ll be a small number of competitors.

Definitely take a look at Cypherpunk. I think it stands out a little bit in the market, just the fact that you focus so much on privacy, which is an important element of it. Thank you for your time today and look forward to chatting with you again.