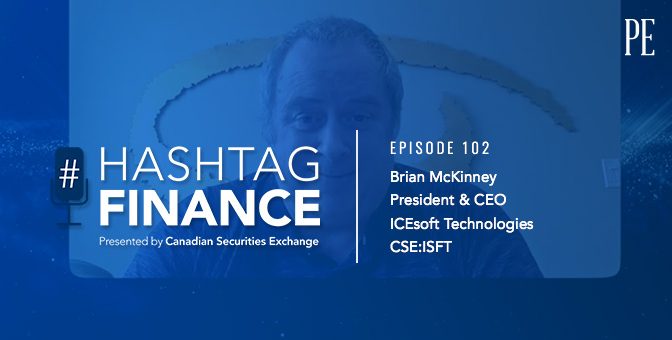 CSE’s James Black was recently joined by Brian McKinney, President and CEO of ICEsoft Technologies (CSE:ISFT), to discuss why his company has never been busier as it currently serves its clients during the Coronavirus pandemic.

In this discussion, Brian shares how ICEsoft delivers enriched emergency information via its Voyent Alert! platform (1:08), how the platform specifically applies during a pandemic scenario (3:54), and the benefits of running a company that has always relied on ‘distributed employee sets’ (7:50).

Listen until the end to hear Brian’s perspective on running a public company in this challenging environment and the significant resources and time the company is putting behind the deployment and servicing of their life-saving technology. 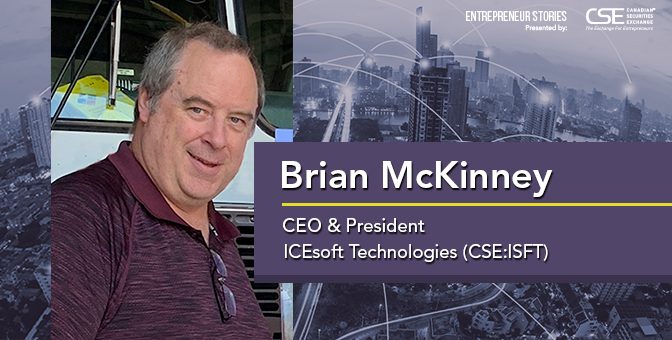 When a small-cap company launches a new product line, having an established legacy business in the background is a dream scenario. Count ICEsoft Technologies Canada (CSE:ISFT) amongst those lucky few. The company is already a leading global provider of critical enterprise software solutions for desktop and mobile enterprise, its rich Internet application products being used by more than 20,000 enterprises and 150,000 developers, with a subscriber base spanning more than 400 corporations.

Eager to do more with its mobile technology expertise, the company, which went public on the Canadian Securities Exchange in June, developed an affordable smart communication platform called Voyent Alert!.

Designed specifically for local and regional governments to alert and communicate with the public during both emergencies and non-critical events, Voyent Alert! is a great example of technology being used to make a meaningful difference in people’s lives…perhaps even saving them.

Voyent Alert! sounds like something quite different for ICEsoft. What compelled you to develop a multi-purpose, mass-notification system?

Our legacy business is profitable and it’s a very interesting business, but it’s also hyper-technical and certainly a maturing market. About 18 to 20 months ago we were tapped on the shoulder by some of our west coast clients and asked if we could repurpose some of our mobile technologies into a new kind of community-alerting system. That’s kind of the genesis of the pivot we undertook. It really represented the kind of next-generation platform that we wanted to go after.

What makes Voyent Alert! different from other mass-notification systems like the Emergency Alert System or AMBER alerts?

Conventionally speaking, information tends to be issued in a very text-centric format. The text looks like a bunch of words kind of jumbled together. And one of the things we felt strongly about was that a lot of people won’t process that information, or they’ll read the first two lines of a bunch of text and then they’ll move on.

We felt that if we could make it more visual and provide a lot more context to the user, the alert would be far more valuable to them. It would allow them to process things faster and make better, more informed decisions more quickly. It’s one thing to know that there’s a fire on 6th and Main. It’s another to get a picture on your phone that shows you on a map here’s the fire, here’s your mother’s house, and it’s 500 metres south of the fire so she’s subject to an evacuation order. That’s very specific to you and very visual. And it’s our contention that that kind of alert would drive a higher level of community engagement.

Day-to-day communications with citizens are also leveraged through the service. It’s not just for emergencies. Our community clients can advise about snow removal plans, targeting specific communities and advising “you have to get your cars off the street, or they will be subject to tow.” Waste recycling pickup schedules have changed. Here are the city council meeting minutes. That sort of thing. If people learn to trust it at a municipal level, they’ll pay attention to it when it’s a real emergency.

Who is the target market for Voyent Alert!?

There are a number of players in the market right now, but the vast majority of them are focusing on large urban deployments. They’re looking to the Bostons, the New Yorks and Torontos to develop solutions for. And they tend to be larger more complex systems, heavy on the back end to accommodate system infrastructure integration.

Fifty percent of North Americans, for example, live in communities of less than 50,000 people. And conventional wisdom alone tells you that a solution that works for New York generally isn’t going to work for a community with a population of 50,000. As a result, a lot of these smaller communities weren’t being serviced very effectively or efficiently by the solutions that were available.

We decided we wanted to move forward with rich, personalized messaging and really focus on targeting smaller communities and more rural regional districts. Strategically, we want to dominate the smaller communities, as our peers basically target large urban deployments. We want to carve out for ourselves that dominant position in the small to medium-sized communities.

Our product is engineered for that service. It’s simpler and easier to use at a lower cost. It’s not like it’s a trivial market. We are focusing exclusively on building up a subscription base. This is a software-as-a-service play with a large recurring revenue stream. One of the advantages of these smaller markets is that they’re very sticky. You know when you get a client, you’re likely to have that client for six or seven years.

That’s a sticky client base indeed. How would you describe the typical entity that subscribes for Voyent Alert!?

We basically sell to governments – cities, towns, regional districts, and counties. Those organizations purchase it on behalf of their citizens and then the citizens can download the mobile app and register for the service for free. We’re providing coverage to about 55 different communities in Canada that we’ve onboarded in the last 14 months. Since we launched, the number of communities that we’re servicing has been doubling quarter over quarter. We’re anticipating a launch into the US by the end of this year.

There are several competitors in the mass-notification alert sector. Who is your biggest rival and how does ICEsoft stack up against the competition?

Roughly speaking, about 30-40% of the communities with less than 50,000 population have no solution whatsoever. The rest might have an older kind of solution that might be an e-mail alert system or something that’s a little bit more dated. Our primary competition comes from the market leader, which is a company called Everbridge out of the US east coast. One of the things we find gratifying is that probably the last seven or eight deals where we’ve been up against other competitors, Everbridge primarily, we’ve been winning those deals. It’s been well over a year since we’ve lost a deal to Everbridge. That says that something we’re doing is resonating with the client.

To wrap up, what’s the strategy for Voyent Alert! for the balance of 2019 and into next year?

We are looking very aggressively at other vertical opportunities that face similar challenges to the ones we are solving for our municipal clients. The residential home construction market is one of those opportunities. Residential builders and trades have a big problem keeping track of their people and ensuring their safety status as well as that of the worksite. There is a significant and clear value proposition here that makes the opportunity very attractive.

In addition to expanding into new market verticals we are also looking to broaden the market footprint for Voyent Alert!. This activity sees us focusing on expanding our presence across Canada between now and the end-of-year timeframe. We will then use that presence as a launching pad into the US market.

We’ll be selective about the markets we want to target in the US. We want to make sure they are the ones that would resonate with the value proposition we’re offering. It’s unlikely we’d go out and target eastern seaboard, high-density urban centers. The Midwest and the western states are the more likely candidates that we’re going to launch into. They are more rural and are faced with the kinds of challenges where we can make the biggest difference.