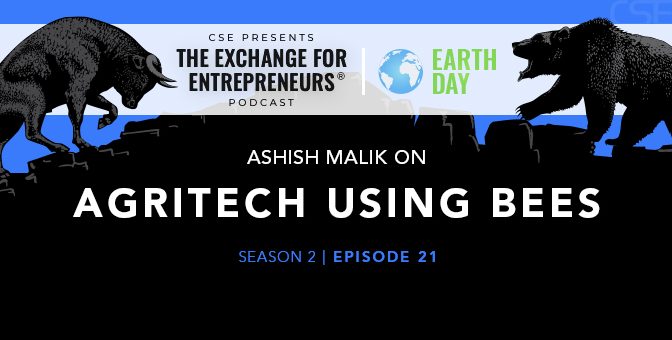 In a special episode for Earth Day, the CSE’s Barrington Miller is joined by Ashish Malik, CEO of Bee Vectoring Technologies (CSE:BEE), to discuss this agriculture technology company’s use of commercial bees as a more sustainable alternative to traditional pesticides. The conversation also addresses the growing demand for agriculture across the world due to population growth.

Here’s an overview of what Barrington and Ashish discuss in this edition of the “Exchange for Entrepreneurs” podcast:

About Ashish Malik
Ashish Malik is Chief Executive Officer (CEO) of BVT. He was previously the VP of Global Marketing for Biologics at Bayer CropScience. He was responsible for managing the portfolio of biological assets for the company and advancing the strategy to develop integrated crop solutions that include biological products together with traditional chemical products, seeds, traits, seed treatments, and services. Ashish joined Bayer CropScience through the company’s acquisition of AgraQuest in 2012. At AgraQuest, he was Senior Vice President of Global Marketing and a member of the company’s Executive Team. Other previous roles have included Head of Commercial Operations for the Home Care Division at Syngenta, Business Unit Director at Imerys, and Marketing Manager at BFGoodrich. Ashish serves on the Board of the Biopesticides Industry Alliance and holds an MBA with concentrations in Finance and Marketing from Carnegie Mellon University – Tepper School of Business and a bachelor’s degree in Engineering from Swarthmore College. 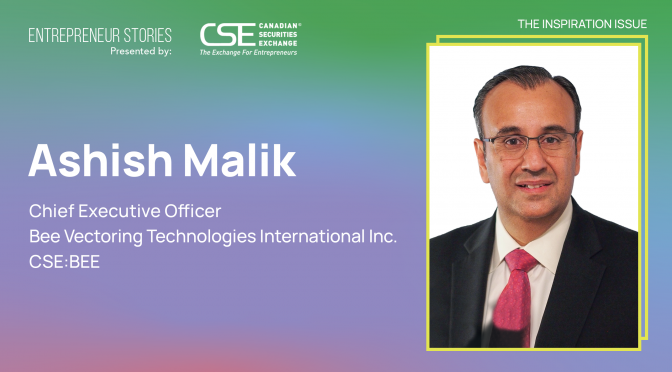 Swarms of mechanical drones are used in modern agriculture, but Bee Vectoring Technologies International (CSE:BEE) is wonderfully old school. The Ontario-based agritech company has successfully drafted some of nature’s little helpers – an army of commercially reared bees – to deliver organic pesticides to crops.

The company’s natural precision agriculture system relies on bees carrying BVT’s patented biological fungicide – Vectorite with CR-7 – from commercial hives to crops. The breakthrough is getting a lot of attention, as it could help farmers reduce, or even eliminate, the need for chemical spraying.

The intellectual property and creativity driving BVT’s business has been in development for nearly two decades, but it’s since 2016 that the company has really ramped up testing and field trials. Currently, BVT has over 65 patents and 35 patents pending in agriculture-dominant countries around the world.

With its patent-rich endeavour, BVT is now eyeing the global US$240 billion crop protection and fertilizer market with its targeted pest and disease management solutions.

But how does it all work?

Its genius is its simplicity. Inside the hive, bumblebees or honeybees walk through a tiny tray, picking up Vectorite with CR-7 powder on their legs as they exit their hives to travel out into the fields. The Vectorite carries a refined form of Clonostachys rosea (CR-7), a fungus that feeds on other types of fungi that damage crops. The powder naturally drops on plants’ blooms as the bees fly around the field pollinating the crop.

The BVT trays are changed during the bloom period and accurately dispense portions of Vectorite with CR-7 that are just the right size for a bee to carry. The company says “multiple biocontrols” can be added to each tray at the same time in a process called stacking.

“BVT is commercializing a system to harness the natural pollination process of bees to deliver safe, biological plant-treatment products to crops to help them fight pests and diseases, producing higher yields for farmers while reducing the use of synthetic chemical pesticides,” says Bee Vectoring Technologies Chief Executive Officer Ashish Malik.

“We have demonstrated that yield increases of as much as 30%, and reductions in chemical fungicides of up to 98%, are possible with our unique and patented natural precision agriculture technology.”

When absorbed, BVT’s Vectorite with CR-7 enables a plant to block disease such as botrytis (grey mould) in strawberries, which is the most widespread strawberry disease in California. According to some estimates, BVT’s solution saves strawberry farmers over $4,000 per acre.

Bees still contribute to one-third of the food we consume by pollinating crops. “There are about 3 million beehive colonies that are used in commercial agriculture today, quite a staggering number when you further consider that each beehive can contain 20,000 bees,” says Malik, an engineer with an MBA from Carnegie Mellon University’s Tepper School of Business.

In August 2019, BVT became the only company to have US Environmental Protection Agency (EPA) approval for a bee-delivered fungicide. The company also received a “residue tolerance exemption” from the EPA, which confirms that products with CR-7 are safe for human consumption. Unlike many chemical pesticides, there is no requirement to test crops for residual CR-7.

“This underscores the safety of CR-7 for human consumption. It also gives growers an economic advantage since they don’t run the risk of their crop being rejected,” says Malik.

The Canadian company has an ambitious US blueprint, so it’s not surprising that Malik resides in Davis, California, near the US agricultural research nerve centre of Sacramento.

“Davis is home to the University of California, Davis, which is one of the leading universities in agricultural sciences worldwide, and the greater Sacramento area is one of the larger innovation hubs for agritech companies,” says Malik. “It is a great location from which to build out our US footprint. We have opportunities across the US – from the Southeast, to the Pacific Northwest, California, Michigan, New Jersey, New England and the Midwest.”

BVT sees its biotech as a solution for berry, almond, stone fruit, tomato and pepper growers. In fact, in its first growing season selling commercially in the US, it has garnered customers from growing regions that cover over 80% of US blueberry acreage.

“Currently, we are focusing on the berry crops. Blueberry growers in the Southeast represented about 75% of our invoiced sales in 2020,” says Malik. The BVT boss says that as he looks to the 2021 season, he sees continued growth in the Southeast and new revenue in Michigan and the Pacific Northwest from berry growers.

“From this base we will expand onto additional crops such as tree fruits and nuts (stone fruit, almonds), and indoor vegetables (tomatoes, peppers) in the medium to longer term,” says Malik.

California requires its own approval beyond the EPA process and represents the largest market opportunity for BVT, with 1.4 million acres of almond farms pollinated by bees. “We are in the final stages of the regulatory approval process in California and Switzerland. In addition, we have started the process for Mexico,” says Malik.

BVT is opening new revenue streams by way of third-party product in-licensing, having successfully rounded out Phase 2 evaluations and a proof-of-concept field trial with two biological insecticides in North America. Field trials in Europe with a third biological insecticide, in addition to a biological fungicide, are in progress and expected to be completed by late fall.

“Extending BVT’s product line through in-licensing of third-party biological products is one of the key innovation projects for BVT. It enables us to open new revenue streams by increasing our addressable market,” says Malik. “These products have the potential to not only deliver additional revenue but also extend BVT’s reach geographically and into new crops.”

BVT hopes to eliminate an unhealthy reliance on synthetic pesticides, and that would be great for the environment. “Having a safe, environment-friendly and affordable food supply system is something we should all care about,” says Malik.

Malik began caring a lot about how food is grown when he was starting a family. “I became passionate about this after my wife and I started our family. I thought about my children’s well-being and joined the agriculture industry back in 2003,” says Malik.