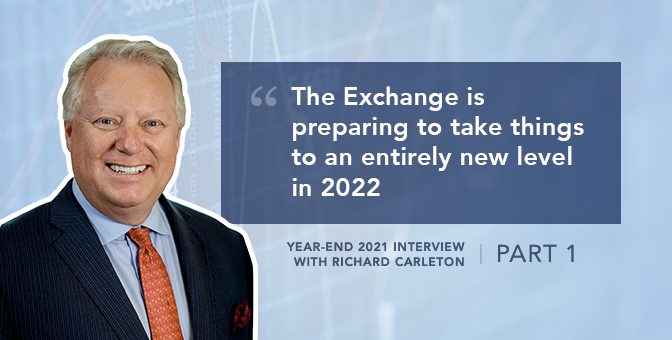 Anyone keeping an eye on developments at the CSE over the past several years has watched the Exchange go from strength to strength, with the number of listed securities, capital raised by CSE-listed issuers, trading volume, and other performance measures climbing sequentially without interruption.

As exciting as the growth in CSE performance and services has been to date, the Exchange is preparing to take things to an entirely new level in 2022. Key to this is a senior designation for larger issuers who meet certain criteria. The new designation, and the regulatory framework that comes with it, also means that ETFs, SPACs, and structured products will be able to list on the CSE for the first time.

In an interview conducted in mid-December, CSE Chief Executive Officer Richard Carleton discussed these topics and more, giving issuers and investors a preview of what is shaping up to be the CSE’s biggest year ever.

Companies listed on the CSE have enjoyed an excellent response to their capital raising efforts in 2021, with a total of $7.74 billion in financings completed in the 12 months to the end of November. We have seen equity raises of all sizes, and debt is becoming more prominent as well; in October, Trulieve Cannabis successfully marketed US$350 million in senior notes. The listing environment at the CSE is designed to facilitate a low cost of capital for the Exchange’s issuers. As larger fundraisings take place, is that advantage being maintained?

There is a lot of ground to cover there, but I’d begin by saying that the Exchange exists to remove as much regulatory friction from the capital formation process as possible, so there are advantages for CSE-listed issuers generally when they are raising capital. As an example, we don’t charge issuers a percentage fee of the amount raised each and every time they do a secondary offering.

In large measure, the decrease in capital costs we’ve seen is also a function of changing dynamics, in that capital is being provided to large and successful companies, particularly in the US cannabis space. For instance, some of these companies were able to launch debt offerings because they now have substantial revenues to secure the debt against. As a result, they have seen the cost of capital from a debt perspective drop to levels which begin to reflect companies of similar size and growth trajectory in the consumer-packaged goods sector.

It’s thus a function of how we operate as an exchange, but also an indication of how capital providers view many of the companies listed on the CSE.

At the end of November, there were 736 listed securities on the CSE, which is 17% higher than at the same time last year. Talk to us about some of the trends you have observed in companies coming to market in 2021.

The first thing is that we are likely to achieve a record in terms of the number of new companies that join the Exchange this year. Right there, that tells you that the market is very robust for companies looking to raise capital to go public. One of the interesting things is that it has been very broadly based. We have many new themes that people have been interested in.

The sustainable food movement is a good example of a sector where a number of companies have tapped the public markets this year. Obviously, the psychedelics industry has also captured a good deal of investor attention. And then there are long-standing industries, such as mining, which is back in a big way, not only because of the robust nature of precious metals prices but also because investments are being made in various industries to advance the electrification of the economy, or decarbonization if you want to call it that. This has a significant impact on the mining space because the demand for the minerals used to produce batteries is extensive. And, of course, companies are also looking to shorten their supply chains, so investments in projects located within North America, for example, have been accelerated.

We have also had a continuing robust marketplace in the cannabis space. We have seen some new issuers in this sector join the Exchange this year and significant amounts of capital have been raised.

In addition, there has been tremendous investment in technology, which provides us with esports, gaming, and the decentralized finance companies related to blockchain. From my 30 odd years of experience in the capital markets, this is really one of the few times I can recall when virtually every industry sector is firing on all cylinders.

There is potential to challenge another listings record in 2022 and surpass this year’s total. This is a very exciting prospect for me, as it shows there is a high demand for our services.

Explain the role of retail investors in the market in 2021. What impact did they have on trading and liquidity?

In a word, huge. The junior capital markets in Canada are traditionally dominated by retail investors. Retail participants have always constituted an extremely important part of the investing and trading community that supports the work of the Canadian Securities Exchange.

It’s no secret that there was an absolute explosion of retail trading activity, particularly in the first quarter of 2021. We’ve set records in terms of daily number of shares traded, transactions, and value traded. By any measure, we are significantly above any kind of activity levels seen previously. And that growth has been principally driven by the expansion of activity from the retail space.

When we talk to our colleagues, and particularly those in the discount brokerage sector, we’re hearing that a whole new generation of investors has joined the marketplace, and really just since the beginning of the pandemic. These newcomers skew significantly younger than the traditional retail investor population who were in the 55 and up category in the past. We have seen lots of new accounts opened with significant participation from people in their 20s and 30s. These are people who are investing in the markets for the first time, and they bring a different viewpoint. They were enormously important in providing capital to the cannabis industry. They are very focused on issues around sustainability and environmental impact, diversity, and helping create a better world. They want to invest in company stories they believe in and that are helping to shape that better world.

There are a number of longer-term outcomes we will see because of this. Things such as ESG (Environmental, Social and Governance) reporting from companies, as well as companies having to pay a significant amount of attention when presenting their stories to where they sit in the world of impact investing. I think it is healthy, it’s positive, and it’s going to introduce some important changes to the way in which companies raise capital and communicate with their shareholders.

Check out Part 2 of the interview here.