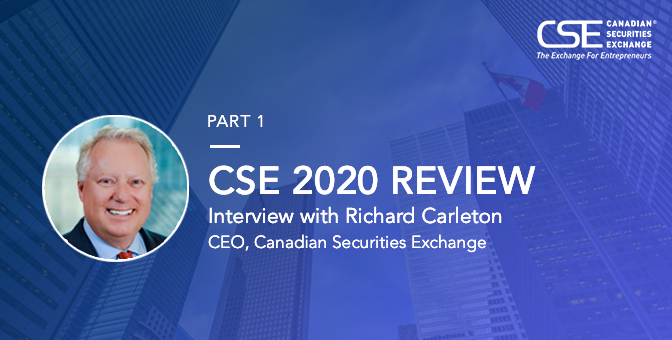 Earlier this month, CSE CEO Richard Carleton sat down with Peter Murray of Kiyoi Communications to recap an eventful 2020 and discuss the coming year for the exchange.

Scroll down to read the full transcript of Part 1 of this interview. For ease of navigation, a list of hyperlinked topics is included below.

4. CSE’s contribution to the mining industry

PM: We spoke in the summer about leadership in the COVID-19 environment. Do you have any new observations to share from the past six months?

RC: The themes are basically the same as we talked about over the course of the summer in that we have done an excellent job – and not just at the Canadian Securities Exchange but the securities industry in general – to provide a high level of service while dealing with the staff dislocation caused by the lockdown orders, bans on non-essential travel, and so on.  That has certainly continued through the fall and now the winter.  We have a small team onsite in Toronto, primarily on the technology and market operations side.

We have transitioned most of our business development and education capabilities – all of them really – to virtual events.  And we concluded in late 2020 the Mining Over Canada project where we created more than 60 hours of content over the course of five or six weeks, which is available on our YouTube channel and various other social media platforms.  That was a wonderful collaboration with thought leaders and issuers from the mining industry.  It was a tremendous amount of work and kudos to Anna Serin and her team for putting the program together.  I think people in the mining industry really took note of our encouragement and support for the sector and we look forward to building on those relationships in 2021.  The landscape continues to be very favourable for mining and it’s a sector of the market we have high hopes for this year.

PM: IPOs have gone from being very infrequent just four years ago to a listing approach of choice today.  Talk to us about how companies are coming to market and what the CSE feels the most efficient approaches are.  Also, are there any misconceptions that need to be set straight?

RC: The IPO was almost dead three or four years ago, and as you mentioned we now see the IPO as an increasingly common route to market.  I think there are a few drivers behind that, but every situation is unique, and for me to say the IPO is superior to the RTO in all circumstances would not be accurate.  Each company has to figure out in the context of their financing what the lowest cost of capital is, what approach will provide the best post-listing liquidity profile – there are a lot of considerations that go into it.

But historically, the concern has been that the IPO takes longer, costs more and introduces significantly more risk into the transaction because of the time it takes from the decision to launch the IPO to actually getting there.  There is also the side benefit that if you do an RTO and are able to get the growth capital required through a private placement supported by a relatively small number of investors, the management team is not having to lose focus on the day-to-day business of the company as they might spending time on the road selling the securities being qualified by the prospectus.  That is a significant consideration for some companies when they decide to do an RTO.

I think it is becoming better understood that there are a number of dealers who are in a position to handle IPOs and they have a lot of investors in place ready to support certain types of companies.  As a result, their sales effort may not be as challenging as it has been in previous market cycles.  And I think post-listing price performance and liquidity can be better with an IPO because you have investors who considered the company and have made the decision to invest in it.  With an RTO, the target can be in a completely different industry.  We  saw a lot of companies that had been mining companies and turned into cannabis companies overnight.  The original shareholders bought into a mining company, not a cannabis company; that can create an overhang that impedes price out of the gate.

So, there are many different considerations.  I think it is healthy that we are seeing more IPOs because that gives people broader access to investment opportunities.  You don’t have to be an accredited investor to invest in securities that are being qualified by a prospectus, and the more people who are able to participate in the growth of these companies, the better off and the healthier the public capital markets will become.

PM: The stock market in general was robust through much of 2020.  CSE data shows financings and trading volume in particular at strong levels for yet another year.  Walk us through some of the numbers, and also discuss some of the internal achievements that people might not necessarily be aware of.

RC: The principal takeaway from the numbers is that financing activity was extremely healthy for the year beginning around late April.  That continued through the course of the summer.  There is often a drop-off in July and August, but in 2020 there was no such effect.

As I mentioned a moment ago, from a dollar perspective the cannabis industry was the largest fundraiser on the exchange.  However, in terms of the number of individual financings, the mining industry was by far the leader.  It’s not surprising, given concerns about incipient inflation brought about by the enormous monetary creation by central banks in developed economies.  As a result, we have seen a tremendous amount of investment activity in the precious metals space.  There is also the expectation that coming out of the pandemic, governments will invest significant amounts in infrastructure, and that means commodities such as iron, copper and other components of steel are going to be in high demand.  We are already seeing spot prices of these commodities increase quite nicely.

There are also concerns about supply chains, where people would prefer to source materials from jurisdictions that are more politically stable than others.  So, people looking to rationalize supply chains and shorten their delivery cycles are encouraging a lot of activity in the North American mining space in particular.

PM: Let’s look a little more at this continuation of strong financing activity on the exchange.  Aside from mining and cannabis, was their notable investor interest in any particular sectors?

RC: For obvious reasons healthcare technologies, and telehealth in particular, are industry categories in which companies performed very well over the course of the year.  It’s not something we would have predicted to that extent going into the year, but when the pandemic began to really take off it was a timely area for these companies to be in.

As far as psychedelics go, we have around 30 companies pursuing different business opportunities in the space.  We first began to hear rumblings in 2019 that people were going to be looking to advance the cause for psychedelics, particularly as a treatment for substance abuse, anxiety and depression.  I’ve had the opportunity in my position to learn from the industry’s thought leaders and the takeaways are fascinating.

There is a meaningful body of clinical research dating from the 1920s through the 1950s for substances such as LSD, psylocibin and ketamine.  The clinical indications were incredibly positive for some of these therapies on depressive illness that had resisted other kinds of treatment.  It was really the war on drugs that pushed these substances into the background and ended research into the space for the last 70 years.  We are now in a position where researchers will be able to continue that work.  I’m confident that we will see supervised therapies involving these compounds achieve important breakthroughs on multiple illnesses that have been very challenging for traditional pharmaceutical companies to appropriately address.

PM: The growth in aggregate market capitalization on the CSE in 2020 was exceptional, and as of early 2021 it has surpassed $50 billion.  Walk us through the reasons for the increase and your thoughts on growth in the years ahead.

It’s going to be interesting with the political changes in the United States, with the Democrats now controlling the Senate.  A lot of these companies have been on a tremendous run on the belief that the Biden administration will oversee liberalization and potentially the de-scheduling of cannabis from the Controlled Substances Act.  My take is a little less bullish. I think there will be liberalization of banking and potentially tax measures associated with the industry, but I don’t believe that either Mr. Biden or Ms. Harris have full support from their party to make new cannabis laws a central piece of their legislative program.  I think a number of longstanding issues will be addressed, but I’m not sure we are going to see full-on de-scheduling of cannabis in the United States, certainly during the first two years of the administration.

In the meantime, progress continues at the state level, with New Jersey having voted to legalize, and New York and Connecticut appear on track to legalize cannabis for adult use in the coming year.   We’ll probably see recreational legalized in Pennsylvania at some point in the next year or two.  These are really big populous states, and the companies that have real scale will have the opportunity to expand their businesses as a result of work at the state level.  These companies will likely continue to grow at significant rates.

CSE’s contribution to the mining industry

PM: I want to go back to Mining Over Canada, as there was so much to learn from the series, and it will have significant educational value for investors for years to come. Talk to us more about how it developed internally and some of the insights that came out of it.

RC: Mining Over Canada was really the culmination of other virtual events we had done earlier in the year.  One of the things that struck us early on was that everyone is working from home, so these highly respected investors and company leaders, they are available – we can call them up and get 15 or 20 minutes for a video segment with them.  I think back to an interview that our James Black did with Howie Mandel early in the pandemic in support of Howie’s charity, which helps provide personal protective equipment to healthcare professionals in North America.  James was thanking Howie for his time and he said, “Hey, I’ll give you as much time as you want.  I’m just here, you know.”

We had a similar experience with Mining Over Canada.  We approached a number of thought leaders – whether it be analysts, investors, or leadership at our issuers – and they were extremely cooperative and generous with their time and guidance.

One of the things we really wanted to help emphasize is just how important the mining industry is to the Canadian economy, not only in historic terms but in the present day as well.  And how Canada can leverage its leadership in public finance for the industry to service the wave of demand coming from the industry.  Whether it’s significant increases in infrastructure, desire to shorten supply chains, new demand for minerals brought on by the electrification of the economy – mining is going to be at the forefront of a lot of thinking and investment in coming years.

Check out Part 2 of the interview here.