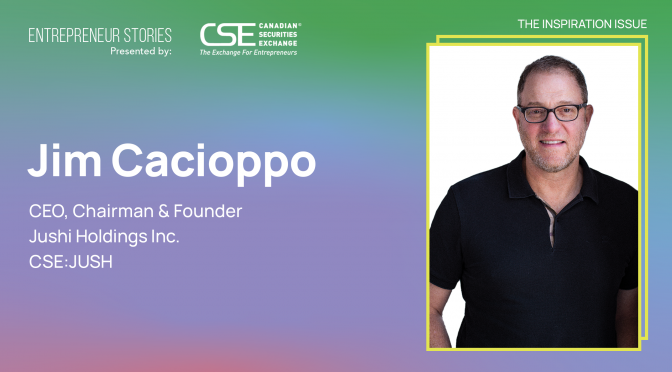 Jim Cacioppo and his team at Jushi Holdings (CSE:JUSH) definitely know the meaning of patience, as they exercised plenty of it before setting up a new company to enter the legal cannabis industry. They watched as executives of all shapes and sizes rushed in during the early days of regulatory change, some quickly enjoying success, and others ending up on the ropes after making an endless trail of mistakes. The future Jushi management circle gathered know-how and bided their time.

That discipline is paying off hugely now.

Jushi is a multistate cannabis and hemp operator, and while the company may only have been founded in 2018, it is already gaining solid traction in its target markets and is exceedingly well positioned for long-term growth.

Cannabis is a complex industry in which most companies contend with a wide variety of regulatory environments. That’s especially true in the United States, given the patchwork of state-by-state regulations across the country.

But to the Jushi team, the size of the pie available for successful operators to share in the United States makes the regulatory navigation worth it. “Everything else pales in comparison to the size of the US,” says Cacioppo, Jushi’s ambitious Chief Executive Officer, who is convinced the company’s strategy will make it one of the top global cannabis players within just a few years.

Cacioppo was a successful early investor in the cannabis space and became an expert in identifying distressed assets through his work in private equity. He saw what he calls a “gaping” opportunity to create a great company that had the right mix of management, financial resources and skills.

Cacioppo teamed up with fellow financial and cannabis industry hands Erich Mauff, Jon Barack and Denis Arsenault to prove his point. The combination of their personal networks, business experience and some early cash from their own pockets got Jushi off to a good start. It is now a vertically integrated cannabis juggernaut, operating in several US states, with cultivation, processing and retail assets under its corporate umbrella.

“Most people who win licences don’t have money, don’t have sophistication, don’t have the resources or the skills to operate these kinds of ventures,” explains Cacioppo, who says the sector is still littered with distressed players, even after the cull of recent years. “They just won licences, so they’re undercapitalized from day one.

“You could see the trends in our favour: the scale, the lack of good management teams and the opportunity to purchase companies rather inexpensively,” continues Cacioppo about the industry’s early days.

Jushi cleverly set about buying assets and licences where there were barriers to entry. It targeted growing, populated areas, with limited-licence medical markets and/or where legalized adult use had yet to arrive.

The team added to its depth in June 2019 with the acquisition of The Clinic, a Colorado business that brought new and proprietary information on cannabis cultivation, extraction and brand development.

The group now has over 70 product formulations under its Lab brand, as well as a new line of hemp-based CBD products called Nira. Its 11 cannabis dispensaries all feature Jushi’s BEYOND / HELLO brand above the door.

Jushi has three core markets: Virginia, with a limited medical licence; Pennsylvania, Jushi’s largest market and home to a well-established medical cannabis environment; plus Illinois and its strong adult-use market. Illinois and Pennsylvania are expected to account for 77% of group revenue in 2021.

In three other markets, Jushi has established operations and is looking to scale up. These are Ohio (developing a medical program), Nevada (large adult-use market) and California. The last of these, of course, is the biggest cannabis market in the US and also home to a long list of very distressed assets.

In Illinois, Jushi aims to double the number of retail outlets it operates to four by early Q1 2021. Experts say the state’s adult-use market is growing rapidly and could reach US$3 billion in value.

In Pennsylvania, which could account for up to US$110 million in revenue in 2021, the aim is to grow its dispensary count to 15, from eight at present, with the already increased capacity at its 90,000-square-foot facility for cultivation and processing.

Virginia, where Jushi is one of only two public companies licensed to operate, will be the jurisdiction of highest growth in percentage terms, as Jushi currently does not have any stores there but is planning to build six.

“We have three great states that give us growth in-house for several years, so we don’t need to do any acquisitions, and we have the capital to build up the businesses,” says Cacioppo. The company closed a $30 million financing in the latter part of October, adding to a cash balance that was already around the $50 million mark.

COVID-19 has brought challenges, of course, including the adoption of strict social distancing rules.

On the other hand, the cannabis sector was declared an essential service, and Cacioppo believes there have been other positives, such as increasing demand, an influx of new consumers, and a newfound respect and validation for the cannabis industry.

A quick look at Jushi’s financials shows how well things are working.

Preliminary third-quarter results announced in early October contained expectations for revenue of $24 million, which would be 61% above the prior quarter, while fourth-quarter revenue is anticipated at the high end of the previously announced range of $25 million to $30 million. Jushi also expects to report positive adjusted EBITDA in the fourth quarter.

Beacon Securities recently initiated coverage of Jushi with a buy rating, describing the company as a “hidden gem.”

Its analysts noted that both New Jersey and Arizona were set to vote on adult-use legalization measures, with the New Jersey vote in particular holding the potential to have a domino effect on other markets, including New York, Pennsylvania and Connecticut.

“Illinois has seen legal-market cannabis sales quadruple to a $1.2 billion annualized run rate after its adult-use market opened in January. Pennsylvania may be one of the ‘dominos’ that falls if neighboring New Jersey approves adult-use legalization next month,” notes Beacon.

With Jushi shares having traded as high as 300% above their March 2020 lows, the patient work of Cacioppo and his Jushi teammates is clearly being recognized. And with more positive regulatory change on the horizon in the United States, Jushi seems to be in that sweet spot with the right strategy at the right time.