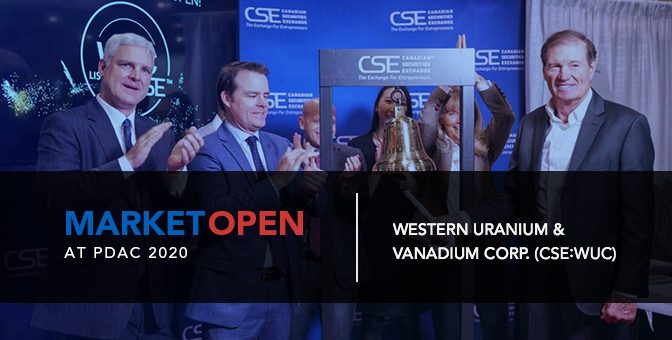 The CSE welcomed Western Uranium & Vanadium Corp. (CSE:WUC) to open the market from PDAC 2020 in Toronto on March 3rd, 2020.

Western Uranium & Vanadium Corp. is a Colorado-based uranium and vanadium conventional mining company that is focused on low cost near-term production of uranium and vanadium in the western United States, and the development and application of kinetic separation. In addition, the company offers other minerals including brown coal and oxides. Through its acquisitions in 2014 and 2015, Western Uranium & Vanadium has gained uranium and vanadium mineral assets in Western Colorado and eastern Utah, as well as additional uranium properties and ablation technology, respectively. Currently, the company has expanded its horizons and is servicing customers in Canada.

When asked about what it meant to open the market during PDAC, CEO George Glasier remarked, “This is great. We’ve been listed on the CSE for five years and to be able to ring the bell was a real pleasure. Thank you.”

On recent company milestones, he stated, “We actually opened five mines just last summer. And we just finished building the ore patch of these mines and we start moving ore out. We mined ore last summer; we’re ready to start shipping ore. The market is coming back.”