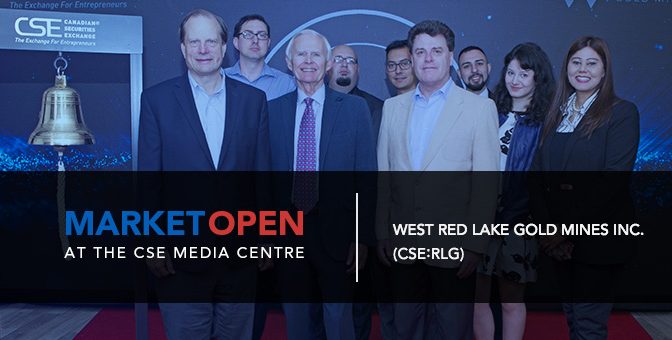 “To ring the bell, to open today’s trading the day after Thanksgiving is something very special for us, and we’re very happy to be here,” said President John Kontak.

“It’s been a very good 12 years for the company, and we certainly have benefited from this relationship we have with the Canadian Securities Exchange. It’s been a true partner in our endeavours to appeal to investors and capital markets, and we’ve done that for over a decade now.” 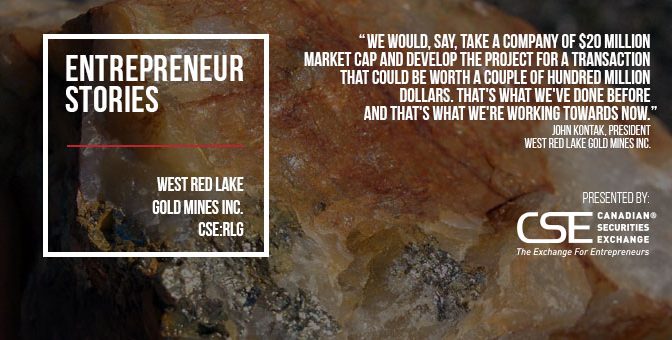 Anyone who knows anything about Canadian gold mining will be familiar with the legendary Red Lake Gold District in Ontario.

It’s home to the Red Lake mine, one of the world’s most prolific mines owned by one of the biggest producers of the yellow metal: Goldcorp (TSX:G).

The district has produced over 30 million ounces of high-grade gold, and other major operations in the area include the Madsen and Starrett Olsen mines, owned by Pure Gold Mining (CVE:PGM), and Goldcorp’s Red Lake, Campbell, and Cochenour mines.

Well on the way to making its own mark in the district is junior explorer West Red Lake Gold Mines (CSE:RLG).

The company’s 3,100 hectare property hosts three former producing mines, lies just 20km from Goldcorp’s Red Lake mine and boasts a management team that is expert in bringing gold projects to the point where they are bought out by bigger producers.

“We explore and develop gold projects – outline a gold deposit or what could be an underground mine in the case of our present project,” explains president John Kontak.

“We would, say, take a company of $20 million market cap and develop the project for a transaction that could be worth a couple of hundred million dollars. That’s what we’ve done before and that’s what we’re working towards now,” he said, adding that it’s a two- to three-year strategy.

And this team certainly has form.

Entrepreneur Tom Meredith is Executive Chairman. He was formerly head of VG Gold, where he worked with West Red Lake’s exploration manager, Ken Guy, and took a $3 million market cap firm to the point where it was sold to Goldcorp founder Rob McEwen in a transaction valued at approximately $200 million.

Meanwhile, Kontak was formerly president of Victory Gold Mines, where Meredith and Guy were also involved. It owned a former open pit east of Timmins that was later sold and is now part of Osisko Mining (TSX:OSK).

The team (including Meredith, Guy and Kontak) took on West Red Lake in 2014 during the gold bear market, sorted out some legacy issues, and in February of 2016 filed a NI 43-101 inferred resource estimate for the Rowan mine target of 1.087 million ounces at 7.57 grams per tonne (g/t) gold.

West Red Lake has three former mines on the property – the Rowan, Red Summit and Mount Jamie mines. The latter two are owned 100% by the company, while Rowan is 40% owned by joint venture and funding partner Goldcorp.

Rowan is currently the focus of attention, where the company is operator and over 500 holes have been drilled to produce that NI 43-101 estimate.

The Rowan project consists of two main exploration targets. At the former mine, the goal is to significantly increase the resource to allow for a long mine life.

Then there’s blue-sky potential at another target, a structural intersection where two regional gold-bearing structures meet.

“That’s what happened to Goldcorp,” exclaims Kontak. “It found a zone and that took it from a junior to a multi-billion dollar company.”

It’s worth noting here that Goldcorp’s Red Lake mine produced a whopping 375,700 ounces of the precious metal in 2015 alone.

The geology of the Rowan mine is a fairly simple archean greenstone, Kontak explains, whereas the intersection target is more complicated, involving folding rocks.

However technological advancements in exploration nowadays means finding that “needle in the haystack” is increasingly plausible.

West Red Lake started drilling again at Rowan in January, having completed two programs last year, and plans to start a campaign every quarter while releasing assays from the preceding program.

The near-term aim is to expand the existing resource and in the future to upgrade into the higher-confidence “indicated” category.

The resource is open at depth and to the east and west, and there’s a 12km strike length so there is plenty of opportunity to work at increasing it, though there’s no specific time set for the release of the next estimate.

“This could be turned into an operating underground gold mine,” Kontak said of Rowan, pointing out there were many mills with spare capacity around in the area, along with good infrastructure and water.

The Red Lake region’s propensity to yield high-grade gold is also key to the story.

West Red Lake has a team in Toronto already trying to attract potential production companies who may be interested in buying the project in two to three years.

Financially, the company has around $1.5 million in the treasury, and is funded for its drill programs in the first and second quarters.

Management are significant shareholders, so they are obviously keen to see value enhanced.

With some attractive targets and apparent multi-million ounce potential, West Red Lake Gold Mines has it all to play for at a time of rising sentiment in the gold market.

This story was originally published at www.proactiveinvestors.com on Feb 14, 2017 and featured in The CSE Quarterly.

Footer:
Learn more about West Red Lake Gold Mines at http://www.westredlakegold.com/ and on the CSE website at http://thecse.com/en/listings/mining/west-red-lake-gold-mines-inc.