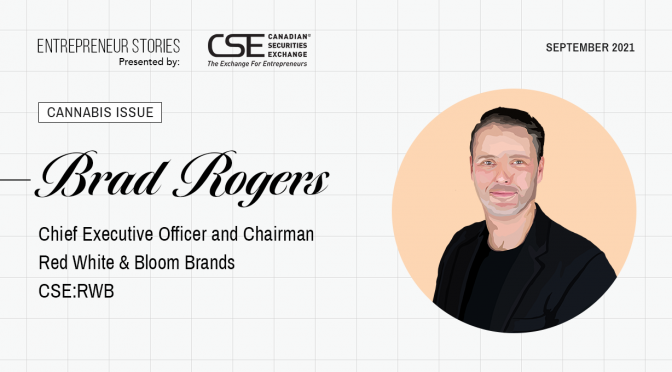 Red White & Bloom Brands (CSE:RWB) is positioning itself to become one of the top three multi-state cannabis operators in the US legal cannabis and hemp sector.

On the cannabis front, Red White & Bloom is predominantly focusing investment on major markets, including Michigan, Illinois, Florida, California, Arizona and Massachusetts. For hemp-based CBD products, US and international markets both feature prominently.

The company is also building on existing advantages through investments and pending acquisitions in Michigan and Massachusetts, plus a completed purchase in Illinois. It recently entered Florida and has been operating in California through its Platinum Vape brand for some time.

Red White & Bloom has said its goals for the rest of 2021 are to build upon the Michigan footprint and focus on growing market share and expanding earnings. How will you achieve this?

The plan is to grow the bottom line as vertically as we can, and obviously to cut costs where we need to. But what we’re also going to be doing is holding the price point with our brand strategy.

In Michigan, specifically, we have the biggest brand in the state, which is Platinum Vape. And we’re rolling out our High Times line there.

When you look at the potential of when commoditization happens – after October, November, December or so – what you’ll see will be prices coming down. But we’re holding our price because of our brand strategy and our distribution strategy, with respect to how we’re handling our product portfolio and product mixes into stores.

Beyond that, with operational efficiencies, as well as our best practices and buying power, we have a strategy to make sure that we’re well fortified when this stuff commoditizes, much like coffee. We’re going to be well positioned to be able to sustain pricing and increase margins as well.

You are also looking for additional strategic relationships and to enter more US states with a “brands only” strategy that minimizes capital spending. How is this progressing?

This is going incredibly well. We’re getting a lot of interest for our brands across many states. Platinum Vape, for instance, is going into Oklahoma, and we’re also doing other brands there. High Times is now in demand too in other states, such as Nevada and the rest of California. It’s really expanding.

Red White & Bloom has closed a number of deals in a short period of time. What advantage do you have in deal-making over your competitors?

I think the real competitive advantage is the fact that this is not our first time. We’ve done this before. When you look at what I’ve done in the past, I’ve had two very successful exits on companies that I built. One of those was Mettrum, which was bought for half a billion. I took another fledgling company in the medical space in Canada from zero to about a billion and a half in market cap in about 12 months.

There’s strong belief in what we do and how we do it. What we’re also doing is fortifying our product strategy to bring in some of the players and get deals done. We make sure that they know that we know what we’re doing and that their products will have the best chance to be able to actually succeed in the market with the distribution channels we’re setting up across each state.

And then, of course, what they get is the halo effect of all the other brands that we’re bringing in and the distribution channels that we already have. And they can build upon that as well.

There is a lot of potential when bringing in new folks and getting new deals done that are aligned with Red White & Bloom’s strategy.

What do you think you personally bring to the company as its CEO and chairman?

Well, like I said, I’ve been through the wringer here before. I’ve seen the space grow from its infancy, all the way down to full commoditization in Canada, and how that affects the marketplace and the customers. And having seen this twice already, in building companies from that embryonic state to where they are now, it really gives us a good solid vision as to what’s happening.

What’s happening is that this is going to be a commodity and your brand is going to be the only thing that you’re going to be relying on, so you need to have great product, great strategy and good distribution.

Another analogy is Starbucks. I don’t know who grows the beans, and I don’t care because it always tastes good. It’s never something you think about. Once you build a good brand, with quality, price and convenience attached to it, you’re going to be standing tall.

And that’s what I bring to the table. I’m bringing vision and marketing and a lot of strategy with respect to where this market is going. I’ve been very successful twice at it and I think the US right now is a great place to use that experience.

What should Red White & Bloom shareholders expect from the company for the rest of the current year and beyond?

Well, we finally got past our pre-qualification in Michigan, which is a huge thing for our company. It means that we can actually now report revenues from Michigan on the assets that we’ve invested in. And that’s transformational for us in that our investors have not seen to date what those assets are doing because we couldn’t report them.

Now we’re going to be able to report those earnings, as well as grow the Platinum Vape business we purchased a little while ago in San Diego. So you’ll see exponential growth in that company in Michigan and California. We’re also entering Arizona and we’ve got Florida coming as well.

When you look at the assets in the new states that we have, and the revenue that is going to be starting in Arizona and in Florida, we’re going to be seeing some nice revenue streams, both from existing states and from new ones. We’re really excited about that.

Overall, I think it’s about the strategy in terms of who we are, what we do, and how we do it. It all comes down to how you’re approaching the market and what you’re doing in that market. We can be asset light and brand rich, and that’s what we’re executing on right now. And it’s playing out well for us.

To create the winner that we’re going to be in the space, we’ve got some catching up to do. We’re about five years late to the market, but when you look at what we do and how we spend, we’re very judicious with our dollars and we’re making great strides with respect to how much ground we’ve covered in a very short period of time. We’re looking forward to catching up to the big boys and really being at that top echelon. 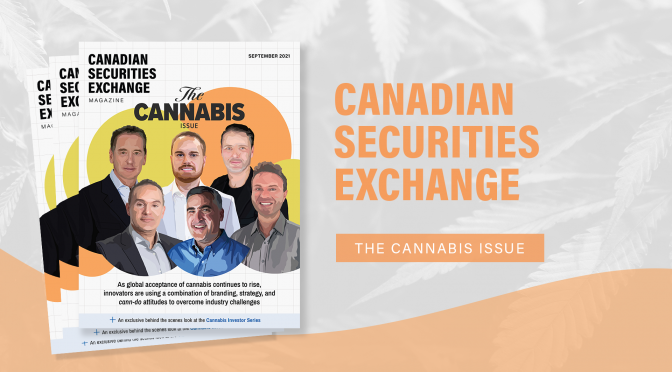 Welcome to the inaugural issue of the Canadian Securities Exchange Magazine (formerly Public Entrepreneur magazine), your source for in-depth stories of entrepreneurs from a wealth of different industries.

As the Exchange for Entrepreneurs, we thrive on change. It is fitting, then, that we unveil an important change of our own to carry us into the future: the update of this publication’s name to Canadian Securities Exchange Magazine.

This new name for our magazine is a reflection that our company identity, and the trailblazing entrepreneurs whose stories are featured within these pages, are synonymous with innovation, agility, and evolution. These traits are particularly evident within the cannabis industry.

In this issue of Canadian Securities Exchange Magazine, we shine a spotlight on five CSE-listed cannabis companies who have set themselves apart in the space and continue to make change with a combination of strong branding and meticulous strategy. Plus, we provide an exclusive behind the scenes look at the Cannabis Investor Series. Read on to learn more about the opportunities and challenges ahead for the industry as global acceptance of cannabis continues to rise.