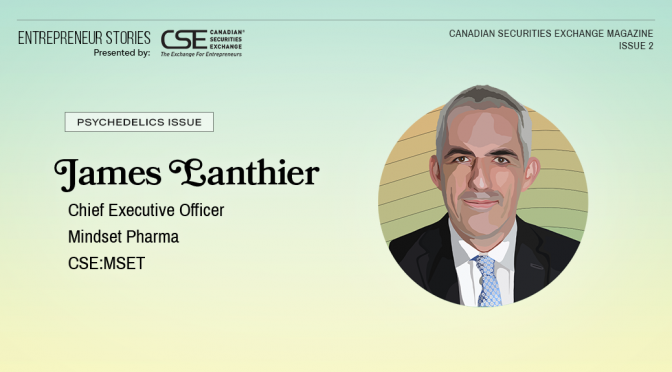 Psychedelic drug researchers have moved mountains over the last 30 years, helping to show that these misunderstood substances have vast potential to benefit people, while being safe and non-addictive.

Today, psilocybin is in Phase 2b clinical trials, MDMA is in Phase 3, and the US Food & Drug Administration (FDA) has given both trials breakthrough therapy status. There is tremendous momentum behind getting psychedelic drugs approved against a backdrop of two frustrating trends in North America: the opioid crisis and the negative effect of COVID-19 on mental health.

From the outset, the company’s goal was to apply drug design, behavioural pharmacology and medicinal chemistry, which are essentially the tools of modern pharmacy, to try to harness the power of psychedelic drugs.

Chief Executive Officer James Lanthier joined Mindset in early 2020 and was sold not only on the calibre of the scientists involved, but the specific strategy the team had developed.

“We’re applying hard science to these substances to try to create the best possible medications for people – that’s it, full stop,” Lanthier explains. “There’s now tremendous evidence to suggest that psychedelics have a breakthrough role to play to treat psychiatric mood disorders, but in our view, the classic psychedelic drugs did have some shortcomings.”

Essentially, Mindset wants to create new drugs that deliver the same or superior benefit but will work more predictably for the widest possible patient set. The team selected a psilocybin-like compound known as MSP-1014 from its Family Number One of novel drugs. The group of compounds is structurally closer to psilocybin but has the potential to deliver a more pronounced psychedelic experience than psilocybin does at similar doses. Given its higher efficacy, the drug would boast an improved safety profile because, theoretically, a patient could take less of it in order to achieve the same effect.

When Mindset tested MSP-1014 in mice and compared it to psilocybin at a range of doses, the company found that psilocybin reduced body temperature by as much as nearly six degrees, which is hardly a nominal amount. MSP-1014, however, showed no effect on body temperature, an early indication of the compound’s safety profile.

Another interesting piece of data from the lab studies confirmed MSP-1014 was comparable to psilocybin after a drug discrimination assay. In the lab, rats were able to determine the distinction between MSP-1014 and saline, which gives even further credence to the drug’s efficacy. “When we take a drug into clinical trials, you want to have as much confidence as possible that the drug is going to be effective and safe,” Lanthier says. “It’s another strong data point that will help us move forward with more confidence.”

Psilocybin is showing promise in early trials, but its effects can last up to eight hours. Mindset is hoping to tackle that challenge with its Family Four group of DMT analogues, which could offer similar benefits in a therapeutic context but with a much shorter trip of between 15 to 30 minutes. Its lead candidate in that group is MSP-4018, which is being compared against a serotonin analogue known as 5-MEO-DMT found in plant species and toad venom.

Researchers think this could be useful for in-clinic psychedelic-assisted psychotherapy. Because 5-MEO-DMT results in a total duration of experience of between 10 minutes and two hours, it would mean less time to spend in a clinic and fewer resources needed to treat a patient.

Mindset’s research uncovered meaningful safety improvements with MSP-4018. “We saw signs of serotonin syndrome at a whole range of doses with 5-MEO DMT, which is a really unpleasant basket of symptoms that can afflict people with high levels of serotonin in their bodies,” Lanthier says. “MSP-4018 showed no signs of serotonin syndrome, but we saw behaviour that suggested that it was just as psychedelic as 5-MEO DMT. It’s really encouraging because it looks like we’ve got a drug that is just as psychedelic but potentially quite a bit safer.”

All of this is a step toward proving the concept behind Mindset to make better drugs than the original psychedelic by applying science. The company is building its value on those tweaks and improvements.

“This is about creating new chemical designs that make changes to the structure of the original drug, and then testing them rigorously to see the effect of the changes,” Lanthier explains.

Essentially, Mindset is changing the underlying molecule, synthesizing the elements of the particular drug. It’s an important distinction from its peer group, as companies can patent protect this type of intellectual property to a much greater degree than a formulation of the original drug.

“If you’re not changing the active pharmaceutical ingredient, but just putting it in a different solution, the level of intellectual property rights is quite shallow,” Lanthier states. “Another group can come along with a slightly different formulation and compete against you.”

In Mindset’s case, they’re getting intellectual property rights on the composition of matter, which Lanthier calls the “gold standard.”

Nearly 30% of people who suffer from depression do not find relief from traditional antidepressants or therapy sessions. It’s a field where pharmaceutical companies haven’t brought many innovations in the past few decades, leaving it ripe for psychedelic drugs to fill the void. And potentially, very lucrative: by dollar value, antidepressants represent a $15 billion industry.

Now comes the hard part. Mindset is hoping to move out of the lab and into clinical trials in 2022, which does not come without risks. As all drug discovery companies know, success in the lab doesn’t always translate to success in clinical trials. It takes a while to do all the testing and work through regulatory requirements until the drug gets to a point where regulators are comfortable having them taken by humans.

But psychedelic discovery is different than many other drug discovery efforts because there is so much data available on how existing psychedelics work.

“Based on all the data, we have a pretty high level of confidence that many of these drugs will have a role to play in treating neuropsychiatric and mood disorders,” Lanthier says. “We’re not reinventing the wheel – we’re simply trying to make changes to the chemical structures that will make them safer and more effective. So, it’s a bit different than a typical biotech venture that’s working on something that’s brand new.”

The goal for Mindset is to stick to what they’re good at: discovering and developing new psychedelic drugs. The firm is positioning itself to partner with other groups, be it pharmaceutical firms or psychedelic companies, that want to get into the space and have the expertise and infrastructure to run clinical trials.

“We don’t think that we’re going to have to raise billions of dollars to become the next Pfizer and take these drugs through late-stage clinical trials,” Lanthier notes. “We think there will be lots of opportunities for Mindset because we were filing intellectual property early and developing data early.” 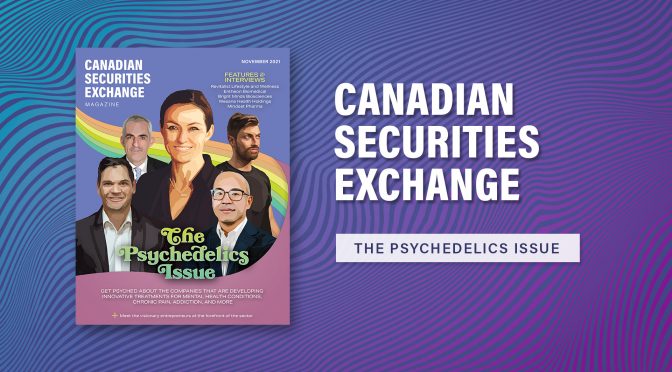 Welcome to the latest issue of the Canadian Securities Exchange Magazine, your source for in-depth stories of entrepreneurs from a wealth of different industries.

Psychedelics has emerged as a rapidly-evolving industry in the last few years. In this issue of Canadian Securities Exchange Magazine, we’re thrilled to share stories of visionary entrepreneurs in this sector.

We shine a spotlight on five publicly-listed psychedelics companies on the CSE who are looking back to older medicines in order to move forward, and developing innovative treatments designed to achieve better health outcomes for people experiencing mental health conditions, chronic pain, addiction, and more.