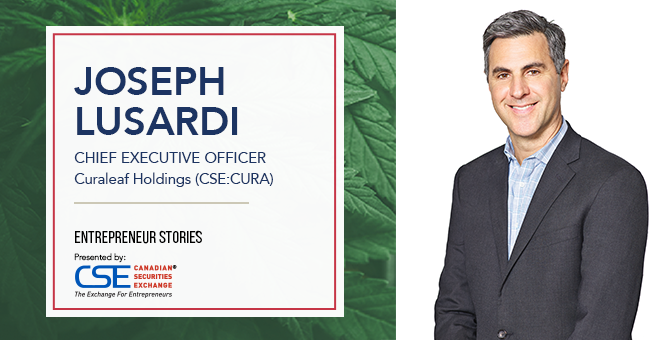 Joe Lusardi is a self-styled “reluctant pioneer” in cannabis.

At the helm of Curaleaf Holdings (CSE:CURA), the largest multistate operator in the United States, Chief Executive Officer Lusardi has overseen the company’s expansion into 15 states and driven blockbuster acquisitions, all while remaining at the forefront of advocacy work toward federal legalization.

But when he opened the first vertically integrated cannabis shop in Maine in 2010, the landscape was much less certain. “We were out on the risk curve, I’ll just say that,” he jokes during an interview with Public Entrepreneur in early May.

Things are much different in 2019. Cannabis is a multibillion-dollar industry and savvy early investors are seeing exponential returns. Canada has legalized cannabis at the federal level and, with two milestone bills being debated in the House of Representatives, signs point to the US eventually following suit. What’s more, public sentiment toward the plant and the substances derived from it is drifting positively.

“Every day the public sentiment around cannabis continues to improve,” says Lusardi. “It’s beyond a tipping point.”

In an industry where winners and losers are starting to emerge, Massachusetts-based Curaleaf clearly belongs in the former group. Over the last three years, Lusardi and his team have established not only the largest US cannabis company by market capitalization, but also a national brand. Now with two game-changing acquisitions under its belt, Curaleaf is a driving force in the cannabis space.

For Lusardi, the goal is to be the biggest cannabis brand in the country. Curaleaf-branded products are currently available in 47 states representing over 600 SKUs. Its product line is comprised of oils, flower, lotions, tinctures and edibles. Last year, the company launched Curaleaf Hemp, offering a range of premium, natural hemp-based products.

Curaleaf has a vertically integrated model, meaning it controls the cultivation, manufacturing, processing, distribution and retailing of its products. That model can be challenging for a company no matter its size, but for Curaleaf it means control of product consistency throughout the value chain.

“Execution really matters,” says Lusardi. “We have to be a good grower, manufacturer, distributor and retailer, which all contribute to brand identity.”

If running a vertically integrated business is challenging, expanding it can be even more so. It should be no surprise that acquisitions are a cornerstone of Curaleaf’s growth strategy. The challenge for one of the biggest cannabis companies in North America is finding those opportunities that make the most strategic sense and creating incremental value for shareholders.

Funding the acquisitions is not a problem. In 2018, when Curaleaf went public on the Canadian Securities Exchange, the company raised US$400 million from investors around the world. Private equity firm Blackrock recently took an US$11 million stake in the company.

Revenues during 2018 were approximately US$88 million. The company has nearly doubled its share price since the beginning of the year, giving it added currency to grow the business.

When Curaleaf set out to look for acquisitions, they knew that they needed to be in California, the largest market for cannabis in the US. The acquisition of Monterey County-based Eureka Investment Partners fit that requirement immediately. Although small in value – the total deal is worth just under US$31 million – the acquisition of Eureka’s 110,000 square foot greenhouse facility allowed for seamless integration with Curaleaf’s manufacturing facility in the state.

Calling the acquisition the “first step in a multistep California strategy,” Lusardi says the deal gives Curaleaf a platform to build more manufacturing and dispensaries on the West Coast.

The company plans to launch three dispensaries as part of its retail expansion strategy to eventually cover the state.

According to Lusardi, Curaleaf has a full acquisition pipeline and will continue to make deals that strengthen its position as a market leader.

The next acquisition came hot on the heels of Eureka and represented a sea change for the company. At the beginning of May, Curaleaf announced it had acquired Cura Partners, makers of the Select oil and CBD brands, in a CDN$1.3 billion deal.

Based in Oregon, Select is one of the most well-known cannabis wholesale brands in the US with its products on the shelves of around 900 retailers. For Curaleaf, the deal gives it a stronger foothold on the West Coast as a complement to the company’s dominance in the eastern part of the country.

Lusardi calls the acquisition a “perfect fit” for the cannabis leader. “We intend to meaningfully accelerate our topline growth trajectory with the addition of the Select Oil product range,” he stated in a press release about the deal. “In addition, we intend to create significant operational synergies from the integration of Select’s wholesale business with our vertically integrated cultivating, processing and retail platform.”

Bay Street analysts love the transaction, with Cormark Securities calling it a good fit with nice synergy potential. “We see particular potential in Curaleaf’s ability to introduce the Select brand on the East Coast, while the integration of Select’s wholesale and distribution platform with Curaleaf’s cultivation and processing capacity should drive material cost reductions in Western markets,” Cormark analysts Jesse Pytlak and Sam Fraser noted in a May 2 report.

Cormark also raised its price target to CDN$18 a share, from $15, calling Curaleaf a “must-own” US cannabis name.

With Curaleaf an established cannabis leader, Lusardi and his team are doubling down on the advocacy and policy work that is a pillar of the company’s ethos. On the policy front, Curaleaf is front and centre advocating for federal legalization of cannabis in the US. Lusardi notes that the majority of Americans are in favour of legalization, citing statistics showing that over 90% of the population supports medical cannabis use and nearly 66% supports recreational use.

“Elected leaders can’t avoid the will of the people,” says Lusardi. “It’s a question of when, not if, legalization will occur. Every elected official is trying to formulate a thoughtful position on cannabis because they’re hearing from their constituency that they want legal access to cannabis. The ‘when’ is not clear, but I think you’ll see the House of Representatives take significant initiative this year, which will put pressure on the Senate and the White House to move forward the cannabis agenda.”

A key feature of Curaleaf’s corporate strategy is creating opportunities for underrepresented communities to participate in the industry. “Minority groups need to have a seat at the table,” Lusardi says. “We want to make sure that the industry is as diverse as its customer base. It’s something that we think about a lot, and we plan to be a part of that solution.”  Curaleaf also launched an initiative this year called the Veterans Cannabis Project, dedicated to improving US military veterans’ quality of life through access to cannabis.

These initiatives are part of Curaleaf’s long-term strategy to build a trusted, recognizable brand that consumers can interact with legally. At the moment, the company is comfortable remaining US-focused. Lusardi is optimistic on federal legalization but is building the company and creating value for shareholders regardless of the outcome.

“The long-term value in this industry will rest in the brand value and the relationship with your customer,” he says. “We feel we have all the makings of a national brand and we’re going to work hard to nurture that relationship.”

This story was originally published at www.proactiveinvestors.com on June 19, 2019 and featured in the Public Entrepreneur magazine. 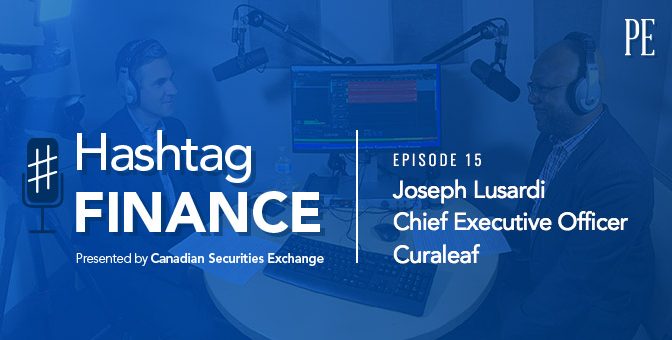 Curaleaf CEO Joseph Lusardi recently sat down with Barrington Miller during #WeedWeek to discuss why vertical integration is integral to controlling the quality and consistency of their product (4:00), how Curaleaf’s biggest advantage might be in its boardroom (6:00), and how evolving legislation is helping America recover from the “war on drugs” (10:30). Listen to the entire podcast to hear why Joseph Lusardi defines himself as a “reluctant pioneer” of the cannabis industry and how the industry is evolving in “dog years”.