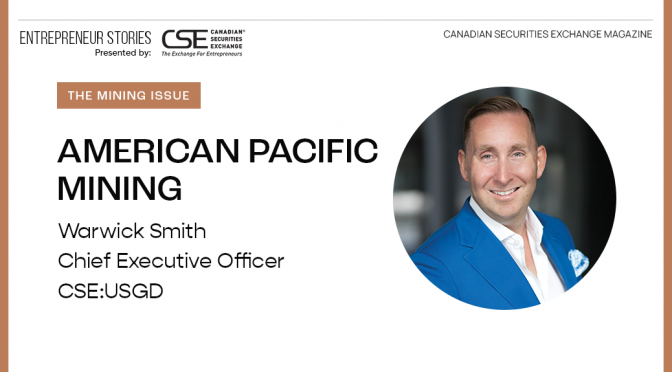 Smith’s team completed a transaction in 2020 that can in every way be described as a company-maker, when it acquired the past-producing Madison Copper Gold project in Montana. Madison is being explored under a joint venture with Kennecott Exploration, which is part of the Rio Tinto Group.

“It’s huge validation for the project,” Smith says. “The majors these days are using the juniors as their exploration arms. They’re not funding their own exploration. They’re looking to the American Pacifics of the world, going, ‘Hey, these guys are onto something. Let’s fund them.’”

Through an earn-in agreement already in place at the time of acquisition, Rio Tinto can spend up to US$30 million for 70% of Madison. That’s something that Smith and President Eric Saderholm, a boots-on-the-ground geologist and veteran mining executive, never imagined would happen on their first attempt to purchase the project.

“But before we got a chance to negotiate on it, another group bought the asset. They did a great job. They came in and drilled into the porphyry, which was a big deal and that got Rio Tinto excited,” he explains.

But what makes the deal, which cost American Pacific C$2.4 million, even sweeter is that it has been highlighted by S&P Global Platts, the leading independent provider of information and benchmark prices for the commodities and energy markets.

American Pacific was selected for 2021 as one of four finalists in the S&P Global Platts Global Metals Awards program in the Deal of the Year category. Even though his company lost out to winner Cleveland-Cliffs, Smith said American Pacific could not have asked for better recognition than being put in the spotlight with some of the biggest and most successful companies in the world.

“It was a significant nod of approval on what we think can be a world-class asset with world-class service in a smaller company,” he says.

Smith notes that the value of the company has grown significantly, making it one of the top percentage gainers among gold mining stocks on the Canadian Securities Exchange in 2021.

American Pacific’s profile is further bolstered by the presence of former hedge fund manager Michael Gentile. He is the company’s largest shareholder, with a 19.9% stake.

Also in the company’s project portfolio are two highly prospective high-grade assets: the Tuscarora gold project and the Gooseberry gold and silver project, both located in Nevada, a famously mining-friendly state.

American Pacific has two other assets in Nevada as well: South Florida and Red Hill. Smith says the company plans to partner up via joint ventures to further the projects.

At Tuscarora, near the town of Elko, Smith says the company is spending C$5 million on a 70-hole drill program. The 4,272 acre project consists of numerous high-grade gold vein targets, including the Grand Prize Target, from which the company reported high-grade samples of 21,032 grams per ton gold and 38,820 grams per ton silver in 2021.

“We’re the first company to ever own it all, which is a big deal. We’re focused there,” Smith says. “We think it’s got the opportunity to be big.”

As for Gooseberry, the company is planning sampling programs and eventual drilling of parallel vein targets within a low sulphidation, epithermal vein system. The mine sits close to the historic Comstock Mining District outside Reno, where discovered lodes and veins led to the production of 8.6 million ounces of gold and 192 million ounces of silver.

“The mine hasn’t been touched since 1991 when it was last in production. We staked it. It was available and cost us C$20,000 to pick it up,” Smith says. “We spent about a million and a half dollars there. We’re up there working again doing the sampling.”

However, Smith explains that it may be time for American Pacific to move beyond acquiring exploration targets as he, Saderholm and the rest of the management team mull growing the company by taking advantage of merger and acquisition opportunities.

“It gives us a chance to think big. I’m not interested in purchasing another exploration project,” he says. “If I were to do something on the M&A side, I’d want to double the size of the company overnight. That’s the type of M&A that we’re looking to do.”

Looking ahead to the rest of 2022, Smith says the company is focusing its energy, and decidedly healthy treasury, on developing Madison, Tuscarora and Gooseberry.

“All three of those have the opportunity to be large multi-million-ounce deposits that we feel that we can grow to meet the desire of majors,” says Smith. 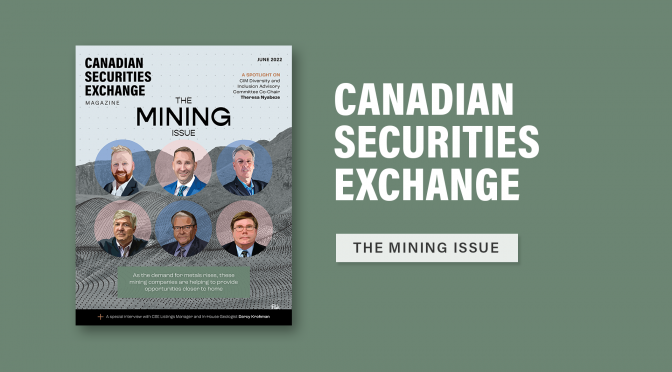 The more the world changes, the more entrepreneurs seek out new opportunities to adapt. No industry has shown a capacity for resilience quite like the mining industry has, and the CSE has witnessed firsthand the resurgence in interest in mining and exploration companies going public.

In this issue of Canadian Securities Exchange Magazine, we highlight individuals and companies who are helping to provide opportunities in the mining space closer to home. We shine a spotlight on a mining-focused diversity and inclusion expert and six publicly-listed mining companies on the CSE that are putting the pedal to the metal to meet demand.