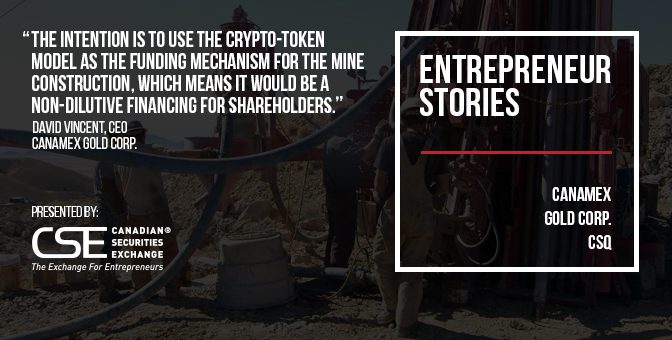 Cryptocurrencies remain a hot topic in financial markets in the opening quarter of 2018, and Canamex Gold Corp. (CSQ) is moving to become the first company to issue a crypto-token backed by gold, and from its own project in Nevada no less.  The team is also looking at working with other companies in or near production to help them finance with crypto-token gold and silver royalty streams, instead of traditional debt and/or equity financing.

It is a new concept and takes some explaining, but the potential to eliminate further dilution for equity holders and create new models for valuation is both vast and fascinating.  Canamex Gold Corp. Chief Executive Officer David Vincent recently gave Proactive Investors a look inside this new funding paradigm.

Canamex Gold Corp. is literally taking currency back onto a gold standard with the introduction of its gold-backed token with an offering currently underway.  We’ll get to your pioneering business structure in just a moment, but first, the Bruner gold project underlies the token.  Tell us about Bruner and the plans there.

We’ve got Bruner to the stage where we need to complete the engineering studies, the environmental permitting and then we should essentially be at the Preliminary Feasibility Study stage, for a mine financing decision.  We hope to be at that point around the fourth quarter of this year.  At that time, we will make a funding decision to construct the operation.

The intention is to use the crypto-token model as the funding mechanism for the mine construction, which means it would be a non-dilutive financing for shareholders.  So instead of doing a traditional equity and/or debt financing, we’ll be doing a crypto-token financing, backed by a gold royalty stream off the project

It’s a win-win situation for shareholders and for token holders.  Token holders will be buying the tokens at a significant discount to the spot gold price, and the tokens will be tradeable on the Ethereum blockchain, potentially at a significant premium to their issue price, including a speculative premium that we can’t define until it’s actually trading.

This is a pioneering concept and has not been done by anyone else to my knowledge.  Where did the idea come from?

It came from looking at gold streaming royalty models, which traditionally is an agreement between two parties: one is the project owner and the other is the royalty buyer.  Royalty buyers include such companies as Franco Nevada, Silver Wheaton Precious Metals and Royal Gold.

Our concept is to take a gold royalty on the Bruner property, which has a small portion of the PEA defined resource, and tokenize it.  Instead of the royalty being purchased by one party, it is purchased by many parties who hold the tokens and these will then have liquidity on the Ethereum blockchain.

You announced an offering earlier this month for US$5 million.  Are you at liberty to give us some insight on how that is going?

It is going very well.  There is a lot of interest, particularly out of the United States and Europe.  We are receiving application forms and cheques.  We’ll keep the private placement offering open until the full amount is raised and then launch a pre-ITO (Initial Token Offering) on the back of it.

The advantage of coming in on the token offering now is that the buyers get a priority allocation into the pre-ITO  at a discount.

For those new to the cryptocurrency world and the concept of this offering, can you walk us through the steps?  An investor commits to the current private placement offering and you are talking about an ITO.  How do the two fit together?

They are similar in many respects.  The current private placement offering is more of a traditional financing mechanism under the current regulations and instead of being issued gold royalty crypto-tokens they will be issued a gold royalty token certificate.  The names and details will be held in a register.  Then the difference with the ITO is that the certificates can be converted to crypto-tokens at a price discount into the pre-ITO, and then they become tradeable on the Ethereum blockchain.  And at that point the tokens have liquidity.

So, chronologically, you close the offering and then there is an ITO.  What happens next, and what will you use the proceeds for?

The intention is to close the offering and go into pre-ITO, which would be priced accordingly and dependent on the spot price of gold at the time.  But again, the pre-ITO offer price will be at a significant discount to the spot price.  Looking at the monthly price chart of gold it appears very bullish.  We expect that the price of gold could be over $1,400 an ounce in two or three months, then it means the pre-ITO price would be higher than the current private placement offering.  Perhaps 10% higher.  So, coming in now has distinct early mover advantages.

The funds from the private placement and pre-ITO will be used to fund the company for the balance of this year to get to the mine financing stage in Q4.  We may not do the main ITO until the third quarter.  The advantage is that by that time we will know what the speculative premium is for these tokens on the blockchain, and then we can price the tokens according to the market price, and not the spot gold price.  If there is a significant speculative premium the price of the tokens in the ITO won’t be anywhere near the levels we are offering in this private placement.  Investors coming into the current placement are coming in at what could prove to be a very low price.

The work you have done on the token to date affords you rights to do this for other asset owners, does it not?

Correct.  We are looking at a number of possible business models.  We might set up a subsidiary newco, for example, that becomes like a royalty company and it raises capital via crypto-token issues.  It might have a number of royalty streams in North America and other safe jurisdictions and the capital raised to purchase those royalties would be via crypto-token issues, backed by the gold and silver royalty streams.

We’ve already deployed six exclusive token names on Ethereum.  They have been deployed but not issued yet.  So, we could use those tokens to fund additional royalties in the future through a royalty aggregation model.

You are also a highly respected technical analyst of financial markets.  What do you see for gold, and why?

I look at long-wave analysis and currently we are in what is called a fifth K-wave, which is a Kondratieff wave.  K-waves last 60 years, so we are on the fifth one of the last 300 years.  This wave should peak in 2027, which is where I expect this current gold bull cycle to start topping out.  We should see a mid-cycle correction in 2023.  I suspect the price will move up toward the previous high of around $1,900 over the next five years, correct and then in the last part of the cycle into 2027 move much higher than $1,900.  Basically, a full-on bull market. The fifth wave of the fifth K wave, which should generate a big move higher.

And if you look at the fundamental background it is not good.  Interest rates have been too low for too long and there is lots of debt out there, much of which will not be paid back, so defaults are on the horizon.  Interest rates thus rise because of a global debt default scenario, where lenders demand a higher interest rate risk premium.  What’s this going to do to the gold price?

And silver is even more undervalued than gold.  Silver has greater leverage to the upside.  You could see Canamex launch a silver crypto-token before long, again using a royalty streaming model.

Aside from Bruner, are there any projects in the Canamex portfolio investors should be aware of?

We have the Silverton gold exploration project.  It has similar geology to Newmont’s Long Canyon in Nevada.  Long Canyon is a dolomite breccia.  Our geologist Greg Hahn, who has built three mines in his career, thinks Silverton has tremendous upside and part of the money raised in this placement will be used for an initial drill program on the Silverton project.

Any other insights from the intersection of cryptocurrencies and hard assets before we bring our discussion to a close?

Just that I think we have tremendous value inherent in Canamex Gold Corp.  We have three pillars to the business model: the Bruner gold development project, the Silverton gold exploration project and the cryptocurrency model for funding.  Based on our updated Preliminary Economic Assessment, which came out in January 2018, the net present value (NPV) at the current gold price of Bruner is about $1.60 per share, using the current shares on issue.  The stock trades at around $0.20, or an 88% discount to NPV.  Where are you going to find better value than this in the market?

This story was originally published at www.proactiveinvestors.com on March 6, 2018 and featured in The Public Entrepreneur.

Learn more about Canamex Gold Corp. at https://canamexgold.com/ and on the CSE website at http://thecse.com/en/listings/mining/canamex-gold-corp.