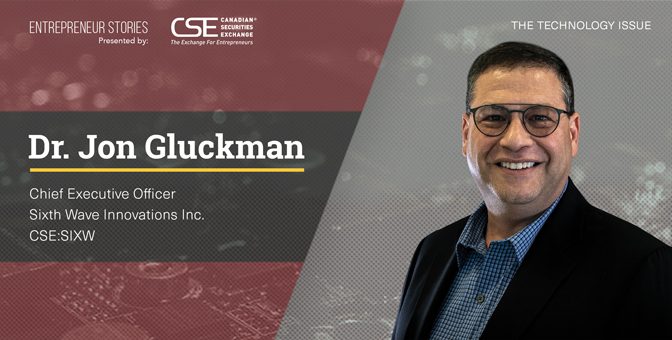 Almost everywhere you go these days, you come into contact with multiple products and services without knowing they are there. Some make life easier or more convenient, while others go so far as to keep you alive, or at least out of harm’s way. We don’t see these products because a non-expert would not even conceive of such things. But thank goodness some experts do, as some of these technologies are fueling the promise of overcoming COVID-19 and pandemics of the future.

Sixth Wave’s COVID-19 research builds on its recent successes in partnering with the United States Department of Defense on explosives detection, as well as on its gold refining and its extraction of CBD and THC from cannabis. Its technology has consistently provided solutions to highly complex scientific challenges. Now, Sixth Wave is committed to successfully adapting its proprietary rapid-detection technology to the COVID-19 puzzle in time to make a difference.

More on that shortly. But first, the basis of Sixth Wave’s business: molecularly imprinted polymers. Few people know what these are, as only a handful of companies in the world even work on furthering such technology. It truly is science at the cutting edge.

Most people think of plastic when they hear the word “polymers,” but these large molecules are far more ubiquitous. For example, wood is a polymer (a natural one), as is protein. To put it simply, a polymer is a material made of long repeating chains of molecules. Each has unique properties, dictated by the types of molecules in the chain and how they bond together. The basic molecules that serve as the links in a polymer chain are referred to as monomers, a defining feature being their capacity to form chemical bonds with other molecules.

At its most basic level, Sixth Wave’s technology identifies specific molecules by creating a polymer with qualities that first attract the molecule in question, then see if it fits. Imagine, for example, a complex magnetic puzzle missing a single piece. The magnetic field draws certain types of pieces with opposite magnetic charges toward the puzzle. When one fits, the puzzle signals to the user that it has found the missing piece.

When a Sixth Wave product identifies its target molecule, it triggers a specific chemical reaction embedded in the polymer by Sixth Wave scientists. In the COVID-19 example, it might cause a colour change to indicate that the person being tested carries COVID-19. The applications are endless.

“The doctors are telling us that water droplets are transmitting COVID-19 from our mouths,” says Dr. Jon Gluckman, Sixth Wave’s Chief Executive Officer. “Once developed, we think we can take the new polymer and embed it into a variety of testing devices, including in an N95 mask or a breathalyzer. You could arrive at an assisted living facility, for example, and be asked to put on a mask as you check in. If it changes colour after several breaths, they know you are carrying the virus. You could do the same thing at airports, train stations or ferry terminals. This would provide a way for everyone to be tested so that even if someone looks good and does not show symptoms, they don’t get beyond the point of inspection if they are carriers and risk infecting others.”

The key to the concept is the ease of testing. No machines or bloodied fingers. No swabs poking into your nasal cavity.

The idea is to embed the polymer in testing form factors that are inexpensive, easy to self-administer and allow for immediate results. “The earlier and more frequently you can test, the better,” says Gluckman. “We need something you can use every day, so you can show up for work, be tested, and if you don’t have it, you’re good to go, and everyone is safe and comfortable with their environment.”

As mentioned earlier, the Sixth Wave team – many of whom Gluckman has been working with for over 15 years – has a proven track record of commercializing molecularly imprinted polymers.

Explosives detection was the largest success, seeing Sixth Wave develop and sell wipes for military applications that could detect TNT, ammonium nitrate and other explosives at extremely low concentrations. “If you wiped a surface and there was a nanogram worth of explosives there, you would see the colour change,” explains Gluckman.

More recently, the team has developed products for the mining industry, conducting lab and field trials with some of the world’s top gold companies, the current focus being pilot plant testing with Kinross Gold Corporation.

“We moved into mining with a cheaper, more efficient and environmentally friendly way to conduct gold and silver extraction when companies use our polymer in place of activated carbon,” says Gluckman. One of the main advantages is that Sixth Wave’s IXOS product has been capturing more precious metals, and fewer of the unwanted minerals that come along with them, than when activated carbon is used.

Similar technology is used in another new Sixth Wave product called Affinity, which extracts CBD from hemp, or CBD and THC from cannabis. High efficiency and high purity are the selling points for Affinity, and Gluckman says the company is ready to start recognizing revenue in this segment during 2020.

“On the cannabis side, our development work is largely done, and we are finalizing supply agreements with our manufacturer. Affinity will also be manufactured at our facility in Lafayette, Louisiana,” Gluckman explains. Extensive test work was conducted with cannabis producers, and Sixth Wave is confident the demand is there.

“With mining as well, very little additional development is needed,” Gluckman continues. “We have already taken the production to commercial levels, and our focus now is getting the product to market. We see a lot more drive for innovation at gold mines, which leads us to have more customer opportunities.”

But it is a slow cycle. “A company might choose our technology but still be in the pre-feasibility stage,” Gluckman notes. It’s a market worth the wait, mind you, because a scenario assuming 10% adoption across global gold production suggests the potential for hundreds of millions of dollars in revenue to Sixth Wave annually, according to Gluckman.

With the scientists who develop the core polymers freed from having to do modifications and test work for the mining and cannabis markets, development resources are becoming more focused on COVID-19 detection. “The world has an immediate and dire need to manage COVID-19,” says Gluckman. “There will be more deaths and little economy left if we don’t figure this out as a society. We’re proud to do our part to help the world get healthy again.”

To that end, chemistry work on the COVID-19 product has begun. Importantly, Sixth Wave can use synthetic molecules for development so that it does not have to work with the live virus. This is another benefit of past product development – handling live explosives is equally undesirable when working on products that involve chemical reactions.

As for the timing of COVID-19-detection products, “I think we are about four or five months away from having particles that would have gone through some testing and internal verification,” says Gluckman. “We are putting together a team that will include external laboratories to provide testing with the live virus. We have several universities we are talking to, and they have access to what we would need to test with.”

Sixth Wave is also partnering with companies that could manufacture products featuring the polymers, including a producer of N95 masks. “I would think in a six-month time frame that we could have the first test units available for approval by the Canadian government, and we’d submit them for approval in the United States.”

At this point, it should be clear that Sixth Wave is not just some company jumping on the COVID bandwagon. It is using proven in-house technology to tackle the COVID-19 chemical structure in more or less the same way it has approached other complex scientific challenges that have continuously resulted in successful solutions.

“In the space of seven years, Sixth Wave has developed and sold millions of dollars of explosives detection products to the US military, and we have created markets for molecularly imprinted polymers in the mining and cannabis industries,” Gluckman concludes. “Our products all lead to lower costs, are easy to use and feature capabilities unavailable with any other technology. We are a young company, but we are solid. We are not in this for a quick buck. We want to make a positive difference in the world.”