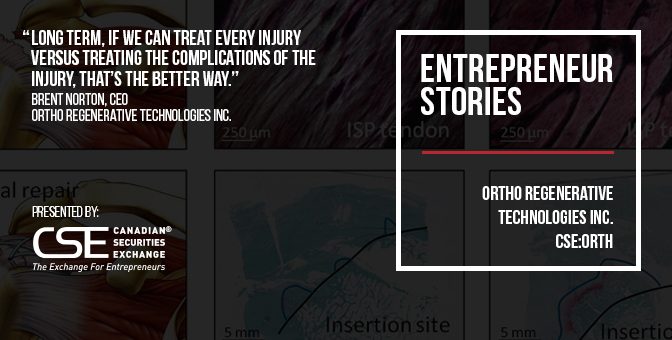 Innovation is oftentimes the result of people approaching a problem from an angle that others haven’t considered.  That’s precisely what the team at Ortho Regenerative Technologies (CSE:ORTH) is doing as it tackles some of the world’s most common surgeries – tendon, meniscus and cartilage repairs in shoulders, knees and other joints.

Chief Executive Officer Brent Norton explains that the long-term result of removing damaged cartilage or meniscus is about the same as not having any procedure performed at all.  Similarly, studies show that shoulder tendon repairs fail at an alarming rate.  Missing its natural elasticity and shock absorber, a joint can deteriorate to the point that arthritis sets in, and if things get bad enough movement is very limited and full joint replacement often becomes necessary.

Ortho’s technology is all about leaving these soft tissues in place and treating them so they repair themselves.

“Long term, if we can treat injury versus treating the complications of the injury, that’s the better way,” says Norton.  “The opportunity is to heal the soft tissues, and the result is that we no longer treat complications such as pain and arthritis, have people miss work and be inactive, nor have to bear the expense of introducing an artificial joint.”

Tendons, cartilage and meniscus are close to the last in line to receive blood supply in our bodies and are relatively avascular, meaning they have few blood vessels. The bottom line is that because blood gets little chance to bring revitalization to these body parts, they do not heal well and thus need assistance.

There are medicines that promote healing in tendons and meniscus but they have to remain in contact with them for a meaningful period of time.  Not only do joints naturally involve internal motion, they also contain lubricants, which usher medicines away from the locations that need them.

Ortho’s solution is to apply what in industry parlance is called a scaffold to hold the medicine in place long enough for it to work.  Essentially, it is a special compound made from a naturally occurring protein that a surgical team mixes with a patient’s blood to ensure efficient delivery.

The scaffold will remain in place for several weeks before naturally dissolving, but in the meantime it ensures the medicine is hard at work on the body part that needs to heal.

“Years ago, when we took pills we took them several times a day,” says Norton in drawing an analogy.  “Then someone invented the sustained release formulation, which allowed you to take a pill only once or twice a day because it was sustained release.  It is a similar principle.”

The technology was borne of studies conducted by two of the world’s most prominent researchers in soft tissue repair: PhDs Michael Buschmann and Caroline Hoeman.  Their initial scaffold for joints had promise, but it took 30 or more minutes to prepare for use when the patient was in the operating room, a factor reducing efficiency and contributing to it being cost-prohibitive.

Norton is a medical doctor himself who practiced largely in the field of sports medicine.  Early on, though, he knew that he wanted to mix actual practice with directing innovation to have the greatest impact.  “I decided to do an MBA at Western University because I wanted to be a driver of technology rather than a clinician seeing one patient at a time,” he says.

Norton’s career path would lead him to be that driver in several corporate settings, including with Novadaq Technologies, a medical imaging solutions company acquired in 2017 by Stryker Corp.

“With Novadaq, at times I felt like I was the coach, and was a founding director,” says Norton. “I helped with strategy, building the shareholder base, the board, hiring a professional CEO, recruiting the investment banks to take it public, and ultimately helping to lay down the strategy to get third-party validation and revenues.  We created multiple partnerships, got FDA approval and a TSX listing and then it went on to have a Nasdaq listing and was sold to Stryker for C$900 million.”

All of which, including the chance to return to his career starting point in Montreal, would seem to make Norton a good fit at Ortho.  “When I took this role, I got messages from friends and colleagues saying ‘right back to your roots’.  It is more than coincidental, it’s optimal,” he observes.

Ortho’s product performed well in pre-clinical studies and is now in the final stages of animal studies, with expectations that it will move to human trials in 2018.

Given that Ortho’s product is in the biologic category, the first step with human studies requires the company to prove that it is safe to use, something Norton expects the product to achieve with ease.

The second study in a biologic is the main study, or pivotal trial, which regulatory bodies use as the basis for their effectiveness assessment.  The pivotal trial would likely begin within two years from now.  After that the company would apply for FDA (US Federal Drug Administration) approval.

But that timeline hardly means investors will be left without milestones to cheer on in the near future.  When asked, Norton lays out a pretty full slate.

“This is the first fully patented product of its type in the world and we have an evolving patent family for it,” Norton explains.  “Over the next year we expect to see patents issued around much of the world for this product.”

“Key studies have also been accepted for publication in multiple scientific peer reviewed journals.”  Norton says this means that some of the images and information on the product will take center stage in the related scientific community.

“In my experience, having five papers in the queue to be published is something I have never heard of,” he says.  “In the next short while we will have multiple papers and studies published, and we can anticipate our approval to begin human studies, which typically drives a lot of corporate value.”

Norton emphasizes that it is up to the researchers to assess whether a product works, whereas management’s role at a biotech company is to minimize other risks and drive the strategy.  He points to responsibilities such as making use of capable intellectual property firms, bringing in skilled accountants and hiring an experienced management team.

“In Ortho’s case, the risk profile of getting through to a pivotal trial is nominal,” Norton concludes.  “You can never guarantee biology or the ultimate results, but our goal is to optimize the process in the most cost-effective manner to get through to an FDA approval in the next three to four years.  We are managing the company to reduce the risk of everything else, so that the only thing we are betting on is the results.”

This story was originally published at www.proactiveinvestors.com on December 7, 2017 and featured in The CSE Quarterly.

Learn more about Ortho Regenerative Technologies Inc. at http://www.orthorti.com/ and on the CSE website at http://thecse.com/en/listings/life-sciences/ortho-regenerative-technologies-inc.