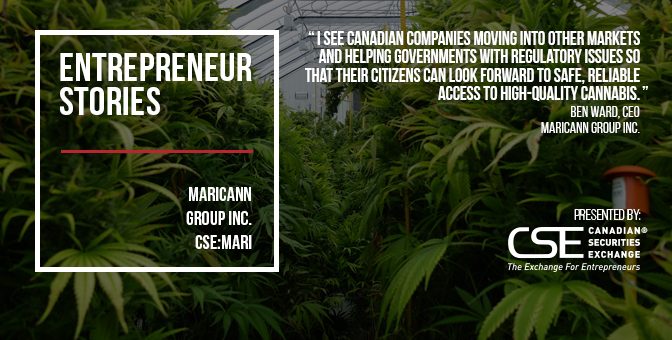 Anyone looking for a model company in the medical cannabis sector would be well advised to consider Maricann Group Inc (CSE:MARI), as thus far it seems to have done everything right.

With a green ethos that drives both product development and corporate efficiency efforts, Maricann succeeded in becoming one of the first companies in Canada approved to cultivate and sell medical cannabis.

Not content with being an early mover in just its home market, Maricann was quick to stake its claim in another jurisdiction largely overlooked by its peers: Germany.

On the verge of turning a profit

The combination has the company predicting profitability by the second quarter of 2018. Its top line is off to a good start, with sales currently running at $450,000 per month. And having just announced a $42.5mln non-dilutive stream financing that will fully fund its German plans, Maricann is positioned to really put its foot on the accelerator.

The strategic mix of Canadian and European markets notwithstanding, Maricann chief executive officer Ben Ward sees the company’s key point of differentiation being technology for extraction and product formulation.

“We have locked up two groups with preparative chromatography expertise in cannabis and this means we have the only ability in the industry to get all the cannabinoids, terpenes and flavonoids,” says Ward. “To formulate the plant, you first have to be able to deconstruct it to make sure you get the active pharmaceutical ingredients.”

Ward explains that there are 500 terpenes – an organic compound found in numerous plant-based products – specific to the cannabis plant, and that companies looking only at cannabinoids or THC are missing much of what cannabis has to offer. “We are focusing on whole-plant medicine, which is done by extracting all of the different isolates.”

This approach to the industry reflects the direction set for the company early on by founder Dr Eric Silver. An assistant professor and clinical teacher in the Department of Family and Community Medicine at the University of Toronto, Dr Silver knew first-hand the benefits that alternative medicine employing cannabis could have on patients. The next step was to gather colleagues from the industry with capital and know-how and begin the search for a facility to purchase.

Eventually, the team settled on the Langton facility, which had been operating under the MMAR (Marihuana Medical Access Regulations) regime established in 2001.

The facility was approved under the more robust MMPR (Marihuana for Medical Purposes Regulations) in March 2014, with a license to sell product grown at the facility arriving in December of the same year.

A green ethos going hand-in-hand with the commercial imperative

A brief analysis of the facility indicates Maricann is committed both to being a custodian of its environment and running its business with an eye on costs. Langton has its own co-generation plant to help with electricity needs and there is even a natural gas well on the property to provide some of the fuel. Other efforts include equipment to capture rainwater for use in the fertigation process.

These and other efforts lead the company to believe that it is among the most competitive producers on the Canadian landscape, with per-gram costs estimated at just $1.37. That should translate into healthy margins that really make their presence known as sales continue to ramp up.

“Our revenue generating capacity right now is restricted only by our footprint of 34,000 square feet,” says Ward. “We are building a 216,000 square foot facility and that will be able to produce another 20,000 kg of dry flower starting in the first quarter of 2018.”

As far as near-term trends are concerned, Ward is in the camp of industry executives who believe smoking cannabis will give way to ingestion in other forms over time. “We think users will come to prefer extract-based products, which is the experience in more mature markets such as Colorado and California,” Ward notes. “Once people can access a product with a consistent extract in a dose they are used to, they will opt for that. We think that is when the real adoption will take place.”

Maricann is ready with its own line of gel caps, which it developed in partnership with another company, to help that trend along.

First we conquer Canada, then we take Berlin

The Canadian operations are clearly well on their way to developing serious momentum, and the plan is to create the same success in the German market.

It was only in January of this year that Germany’s lower house of parliament, the Bundestag, voted to legalize medical cannabis. The drug will be available from pharmacies to patients with a prescription, and importantly for companies serving the market it looks like it will be covered by German health insurance.

“I think we will see almost a carbon copy of the Health Canada program as far as cultivation and regulations are concerned. The difference will be in distribution,” posits Ward. “It won’t be supplied directly to patients but through major pharmaceutical companies or wholesalers, or distribution through pharmacies. Germany’s market will likely remain medical for a long time, but from an ease of access standpoint I think it will move ahead of Canada because of the German population’s propensity to seek alternative therapies.”

Ward explains that companies hoping to grow cannabis in Germany need to possess over three years of cultivation experience, a benchmark that the team at Maricann is able to meet. The company is currently preparing an initial 150,000 square feet of space in a facility that it has the option to purchase. “All we have to do is install the tables, the fertigation system and the lights and we will be operational,” says Ward. “We are moving through the licensing process there right now.”

Ward comments that the team is happy working in jurisdictions where legalization is uniform on a federal level, contrasting the environments in Canada and Germany to that in the United States, where cannabis is illegal federally but many states have passed laws to make it legal.

“Much of the rest of the world, and especially western Europe, is moving forward with legalization in some way,” observes Ward. “There is a much larger population that Canadian companies can export our experience to, and in doing so create best in class companies that compete globally. We might only be talking five or six years, but that is a lifetime of experience in the cannabis sector. I see Canadian companies moving into other markets and helping governments with regulatory issues so that their citizens can look forward to safe, reliable access to high-quality cannabis.”

This story was originally published at www.proactiveinvestors.com on May 10, 2017 and featured in The CSE Quarterly.

Learn more about Maricann Group Inc. at https://www.maricann.com/ and on the CSE website at http://thecse.com/en/listings/life-sciences/maricann-group-inc.