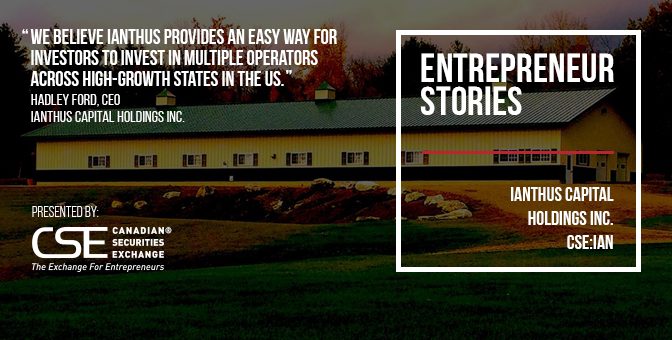 The movement to legalise cannabis in a majority of US states is drawing interest from an expanding list of companies, as entrepreneurs sense opportunity in a market where growth is virtually guaranteed.

Currently, 29 US states have legalised the use of full-strength medical cannabis, with eight of those states allowing recreational use of the drug as well.

In all, 43 states allow some degree of cannabis use, meaning 93% of Americans live in a state that allows consumption.

According to the latest industry data, direct legal cannabis sales totalled US$7bln in the US in 2016 and by 2020 will reach around US$22bln.

However, although this looks like a good opportunity for businesses, the fact that cannabis is still illegal on a federal basis in the US makes it difficult for entrepreneurs to finance their operations.

This is where Canadian Securities Exchange-listed iAnthus Capital Holdings Inc (CNE:IAN, OTCQB:ITHUF) has stepped in.

“You have a strange anomaly in the US where cannabis is legal at the state level and illegal at the federal level,” says Hadley Ford, chief executive of iAnthus Capital.

“Citibank and Bank of America aren’t making any loans to cannabis operators, and the Goldman Sachs and Morgan Stanleys of the world aren’t taking anyone public.”

iAnthus, however, raises capital in Canada, where cannabis is legal for medical use at both the federal and provincial levels, and puts the cash to work in the US market.

That market is growing at a compound annual rate of over 30% so the returns on investment have the potential to be significant.

iAnthus, which has raised over C$50mln since its founding, has been putting money to work in Colorado, Vermont, New Mexico and Massachusetts, and is also in discussions pertaining to other high-growth markets.

In early February, iAnthus announced a strategic partnership with The Green Solution (TGS), a big player in the US cannabis industry.

TGS operates 12 dispensaries and integrated cultivation and processing facilities in the state of Colorado and has generated over US$150mln of cumulative revenue since its inception in 2010.

“The chance for us to work with TGS on strategic opportunities is very exciting,” said Ford. “TGS is a leader in cannabis and we look forward to seeing what we are able to do by working closely together.”

As part of the strategic relationship, TGS will provide iAnthus with retail expertise and advice on investments in Massachusetts, Vermont, New Mexico and Colorado.

iAnthus is providing a US$7.5mln credit facility to TGS which will be used to fund the build out of additional store locations. The facility runs for one year and carries an interest rate of 14% during the first four months, escalating to 23% thereafter.

To finance the credit facility, and also to provide cash for general corporate and working capital purposes, iAnthus closed a bought deal private placement at the end of February which raised gross proceeds of C$20mln. The deal was structured as a convertible debenture with an 8% coupon and convertible into common shares at a price of C$3.10 per share.

The stock, which also started trading on the OTCQB in early April, is currently changing hands for around US$2.00.

“If you are an investor, there are very few industries where you can pretty much have guaranteed top-line growth of 30% for the foreseeable future,” Ford points out. “There are not many ways for the public to play that opportunity. We believe iAnthus provides an easy way for investors to invest in multiple operators across high-growth states in the US.”

Ford says the group has put over US$19.1mln to work to date, and he thinks the opportunities for investors “look outstanding.”

Aside from being excited about working with TGS in Colorado, Massachusetts is also high on Ford’s radar.

At the start of March, iAnthus said construction had begun on a state-of-the-art cannabis cultivation and processing facility for affiliate Mayflower Medicinals, Inc., a Massachusetts non-profit and cannabis dispensary licence holder.

The 36,000 square foot facility in Holliston is expected to have annual production capacity of 8,700 pounds, with the ability to supply over US$35mln of medical and retail sales. The company has spent US$2.1mln of the approximately US$10mln it will need to build out the cultivation, processing and store locations. “We have the necessary cash on our balance sheet today to complete the project,” notes Ford.

Ford calls Massachusetts the “Colorado of the East, but with less competition.” Mayflower has been awarded two of its three licences by the state, including one of the three dispensaries currently approved to open in Boston. A Boston ordinance provides that no other dispensaries can be opened within a half-mile of any dispensary currently approved by the City.

Ford believes that operations in Massachusetts should start generating revenue in the fourth quarter of this year.

The election in November last year which made Donald Trump US President included referendums in a number of states on legalising cannabis in one form or another.

Even so, some people question the heightened political risks to the US cannabis industry caused by Trump’s presence in the White House.

Ford, however, plays down such fears, seeing no material change with Trump in power from the environment under President Barack Obama. “Obama could have decriminalized cannabis. He didn’t,” notes Ford.

Ford says the real issue is not one of politics, but of economics, with states like Colorado seeing a big tax boost and the cannabis industry serving as an important jobs provider.

“Nothing is going to stop the forward motion of the industry at this point,” Ford explains. “It doesn’t make sense politically, doesn’t make sense economically, and there just aren’t the federal resources available to roll back the progress that has been made in 29 states.”

iAnthus reported a small loss last year, but as it puts its capital to work it should ultimately see the business turn very cash generative. “When I look at some of the opportunities we have in the pipeline, the future looks very rosy from our perspective,” Ford concludes.

This story was originally published at www.proactiveinvestors.com on May 11, 2017 and featured in The CSE Quarterly.

Learn more about iAnthus Capital at http://www.ianthuscapital.com/ and on the CSE website at http://thecse.com/en/listings/life-sciences/ianthus-capital-holdings-inc.