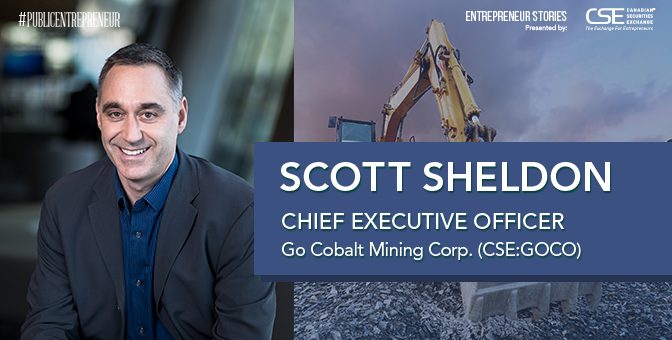 It was serendipity that led Go Cobalt Mining Corp CEO Scott Sheldon to the exploration company’s flagship Monster property in Yukon, Canada’s Wild West which is seeing a modern-day minerals-rush. The Monster property is located 80 km north of Dawson City, in Yukon.

“In 2011, I ran into a friend from university who had been living in the Yukon since graduating,” said Go Cobalt CEO Scott Sheldon. “My dad and I had recently discussed a collaboration and took this opportunity to move into a gold play together leveraging some great Yukon contacts.”

As the material needs of the world’s seven billion people continue to grow, there has been a rush to exploit the Yukon’s exceptionally rich resources — gold, zinc, cobalt, and more.

As a junior mineral exploration company, Go Cobalt is focused on copper, gold and cobalt projects in Canada. Yukon’s industry-friendly regulations attracted the battery metals company which has been in the resource rich region since 2011.

Go Cobalt is on the right track as the fundamentals supporting the cobalt sector such as the electric vehicle and energy storage booms continue to grow stronger.

Sheldon has mining in his veins. His father Don Sheldon raised capital for junior resource companies for nearly three decades.

“I started working in the industry when I was 16 years old up in the Golden Triangle of northern British Columbia,” said Sheldon. “I continued to do this every summer through university to help pay for my degree” added Sheldon, who graduated from Dalhousie University in Halifax.

Interest in Yukon began in the 19th century when gold prospectors pushed northwards and plied creeks with picks, pans and shovels. Today, the Yukon in the northwestern wilderness of Canada is considered one of the best mining jurisdictions in the world.

Co Cobalt’s Monster property in the Yukon is a copper, cobalt, gold prospect covering 63 square kilometers of the Ogilvie Mountains in the Dawson Mining District. The company believes its Monster project represents a large, prospective opportunity because it lies on the Wernecke Breccia, a region of the Yukon known to host iron oxide copper gold (IOCG) style minerology.

“Our VP of exploration even wrote his thesis on comparing the Wernecke region of the Yukon to similar hydrothermal deposits in Australia. Some of the biggest copper mines in the world carry an IOCG signature,” said Sheldon. “Olympic Dam and Candelaria are two examples.”

The tremendous size, relatively simple metallurgy and relatively high grade of IOCG deposits can produce extremely profitable mines. The Monster has zones of elevated copper and cobalt concentrations across the entire 19 km length of the property. The Monster’s IOCG mineralization is hosted within and directly adjacent to the Wernecke Breccia.

“There is also anomalous gold and silver. Traditionally IOCG deposits will be polymetallic and offer a range of minerals,” explained Sheldon.

Go Cobalt has started work on the Monster using satellite imagery and roped in geoscientist Rodrigo Diaz, an expert in IOCGs and remote spectral geology, for optimizing the mineral exploration process.

“We are also redoing some of the historic gravity surveys using updated elevation models,” said Sheldon. “We expect to extensively expand the gravity survey this summer. In addition, we are planning a site wide electromagnetic survey and continued mapping to follow up on historic zones of interest.”

“We have had discussions with Tr’ondëk Hwëch’in First Nation about our work on their traditional territory and will continue to keep them notified as we move forward,” said Sheldon. “The old road to the property is currently in disrepair and would need a special permit.”

The company will use one of the two air strips within 10 km of the property to stage its 2019 program. Go Cobalt says it has adequate funds for the mining season.

“We have about $1 million in the bank. Half of that is flow through funds to be spent this season. We also have about $1.8 million from outstanding warrants that are all ‘in the money’, said Sheldon.

Some miners have really concentrated positions because they are focused on the short term. However, Go Cobalt is aware a complete absence of diversification can be painful for performance. Therefore, it also has a Barachois project, a sediment hosted vanadium-selenium-silver-lead-zinc prospect in the Gaspe area of Quebec.

The project covers 1,801 hectares where carboniferous aged sediments have been shown to host sedimentary vanadium-zinc-lead mineralization.

The latest, greatest utility-scale battery storage technology to emerge on the commercial market is the vanadium redox battery, also known as the vanadium flow battery. V-flow batteries are nonflammable, compact, reusable over semi-infinite cycles, discharge 100% of the stored energy and do not degrade for more than 20 years. These batteries use the multiple valence states of just vanadium to store and release charges.

“Barrachois helps us add another excellent battery metal in a good mining province. We are excited to further that project this summer,’ said Sheldon. “It is the polar opposite to the Monster. It has road access and is relatively flat topography.”

Go Cobalt is leveraging the global shift from fossil fuels to renewable energy by banking on a basket of battery metal projects. Global demand for cobalt, nickel and silvery-grey, malleable vanadium has skyrocketed in recent months with high demand from electric car and laptop makers.

“We are giving our investors exposure to a variety of battery metal projects,” said Sheldon. “Our flagship in the Yukon is a polymetallic style prospect. It has high grade surface mineralization for both copper and cobalt.  Also, we have a Vanadium project in Quebec, and we are actively searching for a Nickel project in Quebec as well.”

This story was originally published at www.proactiveinvestors.com on February 15, 2019 and featured in the Public Entrepreneur magazine.