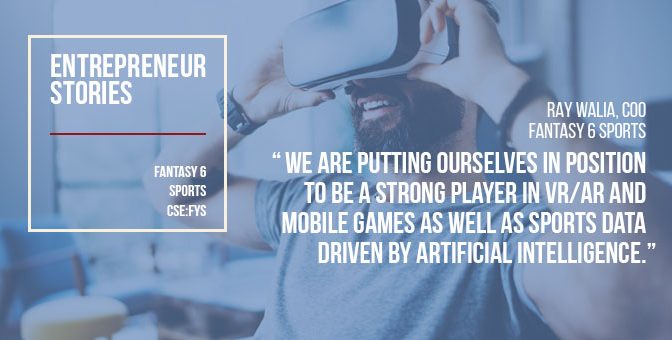 Fantasy 6 Sports (CSE:FYS) is a challenge to figure out at first because it is so cutting-edge you can’t think of any obvious comparisons to help put its business into context. A fascinating array of concepts to be sure, but how do you wrap your head around it?

Best start with the broader theme and work your way down to the individual businesses, then consider how they fit together. By the way, we are talking about a company simultaneously shaping fields such as Virtual Reality, Artificial Intelligence, Augmented Reality, Blockchain and Big Data – only 5 of the 10 technology trends forecast to define the world’s digital landscape in 2017.

At its most basic, Fantasy 6 leverages its capabilities in these technology segments to help brands take their consumer engagement to the next level. “It doesn’t matter what type of industry you look at, data is driving decisions,” explains Ray Walia, Fantasy 6’s Chief Operating Officer and a 20-year veteran of the technology scene. “We are collecting data, we can anonymize it and it can drive decisions for other brands and corporations.”

Sounds like any number of Big Data companies who passively collect data and try to re-sell it with some analytical bells and whistles to entities who need insight into their target customers, right?

Here is where Fantasy 6 is different – this company generates its own data by interacting with a specific consumer base valuable to existing and potential clients. Because it collects data this way, its database is unique and proprietary. And it focuses on a very large and multi-faceted business sector that provides new opportunities for data collection and analysis every day – sports.

A good starting point in exploring the product side is FansUnite, a platform Fantasy 6 acquired earlier this year and is in the process of turbocharging from both the user appeal and business potential perspectives.

True to its name, FansUnite is a place where sports fans who like to bet on games come together to discuss strategies and try to develop an edge, or simply just learn more. “The idea is we are building a community around sports betting and sports predictions that adds a layer of direct fan engagement,” says Walia.

FansUnite gives members a free virtual currency so that they can place bets without putting actual money on the line. It’s the perfect risk-free way to keep score and it gives you bragging rights if you’re good. More importantly for the platform, it separates the skilled from the newcomers and inspires serious discussions around strategy and upcoming opportunities. And for those who operate in the real-money betting world, FansUnite is a universe rich in sports and odds aficionados who can help give them an edge. Think you know better than everyone else what is going to happen in tonight’s game? Well, put your virtual money where your mouth is.

The proprietary data side is well illustrated by shifting popularity among sports, and even the emergence of new competitive pastimes. “The most popular sport in North America for betting is the NFL, worldwide by far it is soccer, but the fastest growing one is e-sports,” says Walia. “The emergence of e-sports has caught a lot of people off guard. Having a site like FansUnite collecting all this data, you cut through the noise and the hype and people are actually seeing that there is active engagement worldwide.” By the way, e-sports is video gamers competing in organized competitions with games such as Counterstrike, League of Legends and other titles you may know. And don’t harrumph – these competitions fill stadiums with spectators.

Mobile games and Virtual Reality (VR)/Augmented Reality (AR) games are additional arrows in the Fantasy 6 quiver, the first commercial release being Football Fantasy Coach. As you might have already guessed, Football Fantasy Coach requires the player to analyze a virtual game scenario and call plays. As with fantasy sports, your choices are based on real players, with the game providing performance statistics that change in real time as actual games are being played. “It is a bridge of technology into the real world that directly engages the fan,” explains Walia. And it is one more way for Fantasy 6 to collect data for analysis alongside other sources to draw conclusions for client brands.

It is not all just about online experiences, mind you. Some of the “immersive” work that Fantasy 6 does requires actual fan participation, such as when the team built a “dynamic 360 virtual arena” for one of the largest companies in Canada recently that enabled visitors to have their pictures taken and receive an image on their mobile phones that looked as if they were standing at centre ice in Toronto’s Air Canada Centre. Not quite the same as lining up to the right of Auston Matthews, but still pretty cool.

“We maintain the right focus by keeping balance among these three verticals,” says Walia. “Each has synergies with the others but they all have different skills required to execute. The games division is going on its own with good partners and intellectual property, the data division is collecting data and it is a different audience that they appeal to. And then the immersive side is more corporate relationships.”

And who does Walia think would be willing to pay the big dollars for high-quality sports data? “In context, our data is all around sports odds and so those who can benefit include any entity in gaming, casinos or sports books for a start. They will value the data one way, and then a sportswear company would have its own different use.”

Fantasy 6 is well-funded to move forward with its plan, having received a convertible note facility in the amount of $10 million from fund Victory Square, which Walia, with partner and Fantasy 6 Chief Executive Officer Shafin Tejani, oversee.

And unlike a lot of technology companies for which revenue always seems to be a “tomorrow” concept, Walia has made sure that sustainability is part of the corporate ethos. “The convertible note is designed to show that we have the wherewithal to execute, but a lot of the ideas we pursue are intended to generate revenue and be self-sustaining. That is one of the reasons why we are able to tackle all three of our verticals at the same time. They leverage each other but drive revenue on their own and the teams sustain themselves.”

The next six to nine months will see data continue to build, the games division debut new titles in different genres, and a big push on the immersive experiences side, with the lead role in a $1.5 million fan experience project for the BC Sports Hall of Fame in Vancouver a part of the effort.

“We are putting ourselves in position to be a strong player in VR/AR and mobile games as well as sports data driven by artificial intelligence, which will be the long tail,” says Walia. “There will be huge value and opportunity around that. And we know that Virtual Reality is attracting attention and we can connect brands with this and other technologies to help them reach important objectives.”

This story was originally published at www.proactiveinvestors.com on Nov 30, 2016 and featured in The CSE Quarterly.

Learn more about Fantasy 6 Sports Inc. at http://fantasy6.com/ and on the CSE website at http://thecse.com/en/listings/technology/fantasy-6-sports-inc.