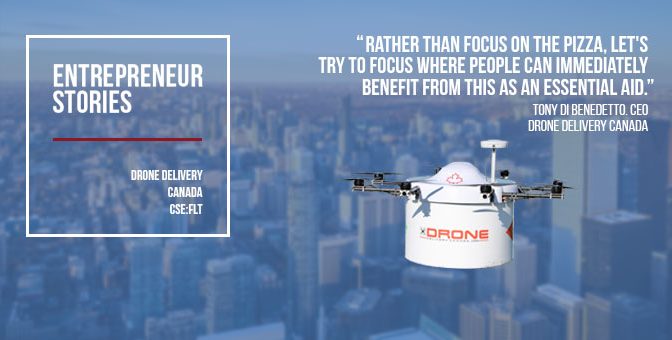 For Canada’s remote communities the reality of receiving packages from automated delivery drones is a lot closer than many might think.

Commercial deliveries are set to begin at some point in late 2017 with Toronto-listed Drone Delivery Canada (CSE:FLT) taking to the air.

Ontario-based DDC will be among the first ever commercial operations once it secures final approvals from Transport Canada in the second half of next year.

He points out there are over 1,800 isolated communities strewn over a sparsely populated landscape. It is not only a sizable market opportunity for DDC, but it also represents an opportunity for the Canadian authorities to better connect areas that are otherwise off the grid.

For investors, meanwhile, DDC presents a low-priced option on what is predicted to be a very substantial technology industry.

Broker Macquarie estimates the size of the entire private drone industry (which could include agricultural applications, infrastructure inspection, surveillance and surveying as well as parcel delivery) will expand ten-fold to around US$60 billion by 2020.

As an early mover DDC is not as recognisable as the likes of Amazon or Ratuken – customer-facing online retailers that have both been working on drones.

But when DDC’s technology is deployed in late 2017 it will be established as a revenue generating pioneer.

What exactly is Drone Delivery Canada

There are two elements to DDC’s technology.  A proprietary operating system – which will route, track and manage fleets of delivery drones – is perhaps the most significant element; the company’s intellectual property.

The Company has also, by necessity, developed its own drones, though Di Benedetto says that as more advanced third-party drones become available the company will be open to using those.

“We’ve had to develop our own prototypes to commence flying, because they simply don’t exist, you can’t go on the market and go buy delivery drones, they’re not there,” he says.

“Eventually, over time I’m sure people are going to create delivery drones and we’re not locked in to the ‘airframe’ design.

“Our logic is transportable. So if a better airframe emerges in six months we can essentially take our logic and transpose it and now we have a different vehicle for our fleet.

“It is no different than a traditional courier today – they have trucks and cars, and they switch between brands, sizes and specs.”

DDC’s drones can presently carry between 7lbs and 10lbs at a time over a 200km operating range.

They have been tested and, subject to regulatory approval, are ready to go.

Progress toward initial delivery operations through late 2017 will be the key catalyst for investors in the coming months as DDC works to prove the commercial concept.

It recently secured licences to test the technology, and is now awaiting full flight status from Transport Canada, anticipated in third or fourth quarter.

Scalability will be key

The scale of early operations will be driven by the sentiments of two key stakeholders, the Canadian regulator and the initial appetite of customers.

“We will slowly ramp ourselves up, it is about taking proper steps at first,” Di Benedetto explains.

“We’re working with a variety of different clients; we have quite a big roster of clients that we’re engaged with.

“Our clients are large organisations with substantial locations and requirements. We’re not delivering for ‘Joel’s pizza shop’ … they [our clients] are very large corporate and government organisations.”

As the delivery system is proven and confidence builds the company expects it will be able to scale up quickly with drones embedded into its clients’ existing operations.

The drones will be deployed on location for DDC’s clients, which reduces the need for ‘bricks-and-mortar’ type capital spending and as such Di Benedetto says it is “very, very scalable”.

“It is an incredibly elastic model,” he adds.

“It is a high-earning, recurring revenue business. The business operationally produces a lot of cash.”

“Clients would contract us for ‘x’ amount of deliveries per month, and it is a recurring revenue stream from then on. There’s a setup charge and integration fees to get the technology enabled in the client’s environment.

“Once it is installed and integrated we then oversee the operation of the fleet. We are essentially ground control for the client.”

Once it is sufficiently large in terms of client orders, DDC will have the option to contract third-party manufacturing for the drones. This would be another important milestone in the development process.

It is quite clear that DDC is presented with a very significant market opportunity.

It is an early mover with a disruptive technology that could transform the transport and logistics business.

The big question, however, is how quickly and effectively the small-cap company can seize the initial opportunity?

There’s still a long road for it to navigate, and it all starts with final regulatory approval.

Investors will want to watch out for progress towards this pivotal regulatory milestone, as well as any commentary from the company on its commercial tie-ups and contracts.

Learn more about Drone Delivery Canada at http://www.dronedeliverycanada.com/ and on the CSE website at http://thecse.com/en/listings/technology/drone-delivery-canada-corp.