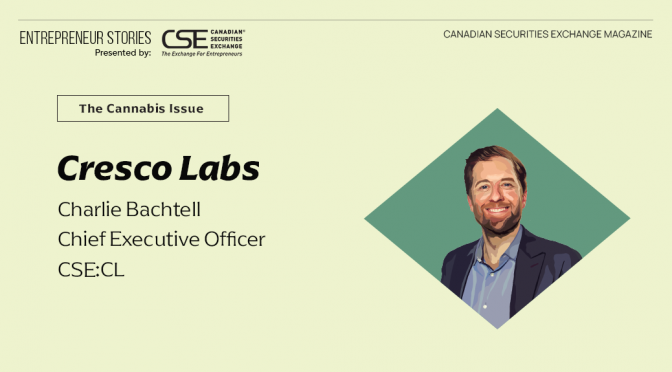 Cresco Labs (CSE:CL) Chief Executive Officer Charlie Bachtell believes that when it comes to cannabis, brands matter just as much as in any other industry. Branding Cresco’s retail stores Sunnyside, rather than simply using the parent company name, is but one example of this concept at work.

There are 51 Sunnyside stores across seven states, all brightly coloured and selling products in packaging that would be right at home on the shelves of Whole Foods or CVS.

Different Cresco Labs products have their own unique branding too, depending on their target audience. There’s the namesake Cresco, the flagship “excellent everyday cannabis,” packaged in sleek, matte-coloured containers.

Then there’s Mindy’s, a line of restaurant quality edibles made in collaboration with a James Beard award-winning chef. The packaging has a deep red colour and black cursive font – it looks indulgent. It’s a Cresco Labs product just the same, but it has a totally different identity.

Bachtell emphasizes the importance of a house of brands strategy rather than what he calls a “branded house” where everything is named for the company itself. Consumers are loyal to brands they trust, and you cultivate that trust by speaking to your target audience.

“One thing we realized very early is that the cannabis consumer is very wide and varied,” Bachtell says. “You’ve got your 21-year-old male college student, but you’ve also got your 63-year-old grandmother. They’re effectively walking to the same store to buy the same product, but they want it to look and feel very differently from each other.”

The company grew even stronger in March when it announced a definitive agreement to acquire what Bachtell refers to as “the largest engine of value creation in the industry,” New York-based Columbia Care. Once complete, the acquisition will bring 131 facilities (99 dispensaries and 32 cultivation and manufacturing locations) into the Cresco Labs family in one fell swoop. The transaction is expected to close around year-end.

Creating scale in the US cannabis industry is a challenge, in no small part because regulations vary from state to state. Most cannabis companies, Cresco Labs included, generate 75% of their revenue from their three biggest states, according to Bachtell.

But with Columbia Care under the umbrella, Bachtell expects to have eight states contributing at least US$100 million to the top line in 2023. That’s significant diversification.

“We are matching the most productive per-store retail operating model with one of the largest combined retail store platforms in the industry,” Bachtell explained on the company’s earnings call to review the second quarter. “We are creating an unmatched diversification and balance of revenue by geography and by channel.”

Speaking of geography, Cresco Labs is number one in market share in Illinois, Pennsylvania and Massachusetts. The goal is to be in the top three in every state where the company operates.

Bachtell is based in Illinois, where before he co-founded Cresco, he was general counsel for a mortgage company. He started that job in 2007, just in time for the housing market to be engulfed by the Great Recession.

The mortgage industry went from relatively unregulated to highly regulated overnight, Bachtell says, and those in the business had to figure out how to navigate rapidly shifting sands.

When a colleague suggested they get into the cannabis business in 2013, Illinois was just about to pass a law legalizing medical cannabis. Bachtell was skeptical it would be a good fit for him, but then he saw the legislation.

As it turned out, mortgage banking and cannabis sales have something in common.

“I read the bill, and it was as well-drafted and thorough as legislation that was geared toward that banking industry through the last five years of crazy regulatory and legislative initiatives,” he says. “I felt like I had read this book before.”

What Bachtell realized then is that cannabis would never be less regulated than it was at the time. Especially if federal legalization eventually became law, cannabis would develop into a consumer product whether the industry knew it then or not.

The cannabis industry, according to Cresco, can be broken down into four verticals: cultivation and manufacturing, building consumer brands, distributing those brands onto as many shelves as possible, and retail locations. The goal is to excel at all four, but Cresco is prioritizing the middle two. That’s the way the wind is blowing, according to Bachtell.

For example, if cannabis products do end up on the shelves of your local pharmacy, that makes brands more important than brick and mortar retail stores.

Illinois also became the first state to require that products be packaged in childproof containers. That cemented the importance of packaging in what Cresco Labs considers its mission to this day: normalizing, professionalizing and revolutionizing cannabis.

“If Illinois was going to require you to put it in a container, then that becomes your Coca-Cola can, your Budweiser bottle, your Marlboro cigarette pack, your Tylenol box,” Bachtell explains. “However you want to think about cannabis, it just became a consumer product good.”

Bachtell is the first to admit that the cannabis business is complicated. With all manner of different state regulations and federal legalization not yet realized, it’s not an easy industry to navigate. But it’s where Bachtell feels he belongs.

“I knew what the industry needed at that time, which was somebody to come in that had been through this kind of chaos before and knew how to normalize and professionalize an industry that people were concerned about.”

Investors are concerned too, he says, and fatigued by the lack of federal progress. Cannabis companies can’t trade on the New York Stock Exchange or Nasdaq while cannabis is federally illegal, and there is no shortage of OTC-traded companies jockeying for position.

But Bachtell believes Cresco Labs can become the most important company in cannabis. With a vibrant house of brands and an acquisition that more than doubles the company’s retail footprint, the mortgage lawyer turned cannabis CEO looks to have collected all the pieces to the puzzle.