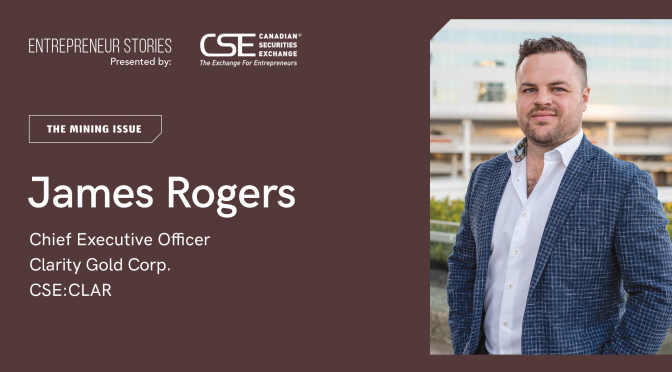 Founded in 2019 and publicly listed on the CSE in July 2020, Clarity Gold (CSE:CLAR) has the objective to acquire and develop gold projects that have been “overlooked or underfinanced.”

In November 2020, the company acquired an option on 100% of the Destiny Project, a gold project located in the prolific Abitibi Greenstone Belt, which extends from Wawa, Ontario to  Val-d’Or, Quebec.

Rogers spoke recently with Public Entrepreneur about his views on building a company in the resource sector and what the future holds for his industry and Clarity shareholders.

Let’s start by delving into Clarity Gold’s mission statement and your guiding principles.

Clarity’s objective since inception has been pretty clear – we’ve been entirely focused on gold in North America, with an emphasis on Canada. Our mandate has been to become an explorer concentrated on discovering and building ounces in stable jurisdictions within North America.

British Columbia was our starting point, and we’ve grown by establishing a strong foothold in Quebec with the Destiny Project.

Destiny is a project you acquired in November and it is in the famous Abitibi Greenstone Belt. Tell us about your decision to obtain a 100% option on this project.

Destiny is an exciting gold project on a lesser-known structure in the belt. The Abitibi is an important jurisdiction in Canada, and in the world, really. It is one of the most prolific greenstone belts there is.

The Abitibi is comprised of six dominant structures. The 400-kilometre-long structure that the Destiny Project is located along is called the Chicobi. It is a less-explored structure that is proving to have gold mineralization associated with it, just like on the Cadillac and other well-known structures through the Abitibi. This is one of the reasons we were attracted to it. Dominant structures play an important part in controlling gold mineralization within the Abitibi.

When we look at the main structures in the south, they are largely near surface. Nobody really found the Destiny Project until 1998 because it has a thin veneer of overburden and till – it is just not on surface.

It started in 1998, which kicked off multiple campaigns totalling over 50,000 metres of drilling, culminating in a historic resource in 2011. And it has basically lain dormant since 2012. Our mandate is to take a fresh look at this, peeling back the previous data and thinking more about this project’s optionality as a high-grade, structurally controlled gold deposit.

You also have three projects in British Columbia. How do these fit into your near-term plan?

We started with Empirical, which was our flagship project in British Columbia. We then acquired two more grassroots projects in the province. My background is in project generation and one of my strengths is keeping an eye open for new opportunities and projects. When our team saw Destiny, we recognized the opportunity for a more advanced project to create value in a jurisdiction that we’re comfortable working in and understand really well. We see the best opportunity to create near-term value for the company in advancing Destiny, but will continue to maintain and advance the rest of our portfolio.

How are you funded to move forward with the planned work following your recent private placement?

We just finished a $4.5 million financing. The next step for us is two-fold. We are financed to carry out exploration to advance Destiny but are also on the lookout for more projects with a similar profile where we could add value with our expertise. Destiny is a foothold – it is really our first step into a large gold camp where we have experience operating.

You have somewhat of a different background than the typical junior company CEO in that you run a large services company for the industry as well. What do you consider is your main strength as head of Clarity Gold?

I’d say looking at data and coming up with an idea. A cool stat is during the hunt for Destiny, I compiled 200,000 drill holes in Quebec and Ontario inside of the Abitibi and started thinking a bit about why the Chicobi structure just hadn’t been looked at the same as the others and why this is an important and underexplored part of the Abitibi story.

Bear in mind, the Abitibi has produced more than 180 million ounces of gold, which is an incredible number. It’s actually hard to keep track of the number of headframes you pass as you drive from Val-d’Or to Timmins. One of my strengths is definitely looking at data but also in executing.

I come from an exploration background, running a services company where our specialty is grassroots exploration and running drill programs, up to say 70,000 to 100,000 metres of drilling in a year. But when we get in and take a look at data, and we’re able to manipulate and think about things differently, that’s where we find things that get exciting. Where things have been overlooked or interpreted in a different way. Then we’re able to bring a fresh perspective to something and bring it to life.

Let’s finish up with a look at what investors should expect from Clarity in 2021.

This year is going to be big. It will include our maiden drill program on Destiny, which should be kicking off before winter’s end. We’ll start with about a 10,000-metre program, which will then carry on into subsequent drilling as we get results and continue to move it forward.