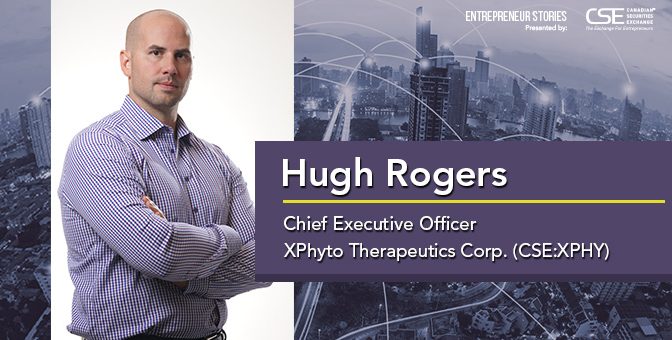 The art of successful investing is not about what is happening now, but rather figuring out what is on the horizon and set to emerge as the next big thing. Positioning oneself to make the most of that development is what gives competitors in any aspect of the business world an edge – the famed early-mover advantage.

Armed with a legal background focused on corporate restructurings, plus experience in molecular biology from research work at the University of Toronto, Rogers agreed with his business partners that they wanted to participate in the burgeoning cannabis industry, yet not in the way everyone else seemed to be doing it.

Large-scale growing operations in the US and Canada did not interest the group. So, what was it that others were overlooking, something with greater potential than was to be found in the increasingly crowded North American arena?

“The vision for XPhyto was to foresee where the industry would be in two, four, and six years, and then position the company accordingly,” explains Rogers. “In the end, we decided that medical formulations and clinical validation in emerging European cannabis markets was the best place for us to be.”

That best place, to be precise, is Germany, where cannabis is legal for medical use and, according to XPhyto, not subject to the same stigma the drug suffers in North America and many other parts of the world.

“It’s a very open market in the sense that, in our experience, regulators at every level of government, and I would also say the medical community – physicians and pharmacists – are open to cannabis products,” says Rogers. “There is a history of botanical medicine in Germany where they are eager to learn but at the same time are looking for clinical validation.”

And no other entity, quite literally, is positioned in the German market the way XPhyto is to help cannabis achieve the level of formal validation that consumers expect of widely used pharmaceutical products. The company’s 100% owned German subsidiary, Bunker Pflanzenextrakte GmbH, possesses a German cannabis cultivation and extraction licence for scientific purposes issued by the German Federal Institute for Drugs and Medical Devices. To XPhyto’s knowledge, it is the only one in existence.

“We’re setting ourselves up to work with the government on the scientific side,” explains Rogers. “That means cultivation, extraction, remediation of oils, seed banks, tissue banks, clinical trials – all of the scientific knowledge.”

The XPhyto team has done an admirable job of building a company with top clinical talent both at the German operations and in Canada, including its recently announced cannabis research and development agreement with the Department of Biochemistry at the Technical University of Munich.

Soon to follow in Germany is a 10,000 square foot facility, half of which will house small-scale cultivation rooms, with the other half being for storage, manufacturing, and distribution. The company estimates it will be up and running with plants under cultivation in the first quarter of 2020.

Expect security levels to be high, given the structure that aptly named Bunker is renovating was once a military command centre. Bunker founder, and now XPhyto Vice President of European Corporate Development, Robert Barth will oversee the renovations. It was also Barth who brought the Technical University of Munich into the fold.

The German research bandwidth is augmented by two exclusive five-year engagements XPhyto has with the Faculty of Pharmacy at the University of Alberta. “Our primary goal in Canada is to focus on clinical validation,” says Rogers. “We have an ISO-certified clean room for our new extraction equipment for production of cannabinoid extracts and isolates. I think the first formula we’ll clinically study will be for topical dermatology followed by oncology pain management. Our expertise at the university is drug delivery and we have some unique applications for cannabis products.”

Clearly, the company’s main objective is clinical testing, and ultimately clinical trials, designed to provide the medical community with the same standard of product understanding and trust that many other prescribed treatments currently enjoy. In this way, doctors will know exactly what type of cannabis, or cannabis-derived product, to prescribe for a given condition, in what dose and for how long.

But investors and others new to the company shouldn’t conclude that the validation theme at the core of XPhyto’s model means that cash flow is something far off in the future. The supply/demand balance in Germany’s medical cannabis market features more of the latter than the former, and XPhyto is positioned to help.

“The German market is large and domestic production expected to come online in 2020 will meet only a small fraction of total demand. There is a deficit that will be made up through imports and that is an opportunity we are rapidly pursuing,” remarks Rogers.

“We are working to secure supply of ultra-premium flower in Canada,” he says in beginning to explain the import strategy. “The best premium growers are in Canada and the US. We are focused on Canada and are working with a number of great growers to source product.”

The XPhyto team believes that providing the best experience for patients must embrace testing for pesticides, heavy metals, and offering products in optimal packaging. If everything goes according to plan, product will be ready for shipping by Q1 2020.

Advancing this strategy on multiple fronts is the acquisition, announced in late August, of Vektor Pharma TF GmbH, which holds permits for cannabis importation and narcotics product manufacturing, among others. And in a possible sign of things to come, Vektor also has established itself in the research and manufacturing of thin-film strips for drug delivery, including transdermal patches and oral strips.

Said Rogers at the time of the acquisition’s announcement, “We believe that Vektor will add significant long-term value at every level of our business, from clinical trial expertise and drug manufacturing capability to their German cannabis and narcotics import licences and strong relationships with the German health authority.”

XPhyto’s strengthening German presence will be a source of many things, boots-on-the-ground intelligence being one that should enable the company to smoothly blend into the German supply scene with the long term in mind.

As an example, Rogers explains that if XPhyto has a certain volume of cannabis ready to sell it won’t necessarily put it all on the market as fast as possible. “What we want to do is build our distribution and demand through consistent supply so the physician knows when they prescribe our product that there is availability for three to six months. We would rather build our patient base slowly and steadily than flood the market – here is a whole bunch of supply and then, oops, it is not available next month. The end result when you take that approach is that physicians are less likely to prescribe your product.”

Having only made its trading debut on the Canadian Securities Exchange in August, XPhyto is a newcomer to the public markets. But asked why investors should be interested, Rogers is clear as to what sets the XPhyto opportunity apart. “It is important to understand that the cannabis industry is here to stay,” he concludes. “But at the same time, you must carefully consider where to allocate your investments. We have gone 100% into opportunities that were on the sidelines for a long time, and I think you are going to see medical applications, clinical validation, and European opportunities come to the forefront over the next two years. And that is exactly where XPhyto is positioned.”