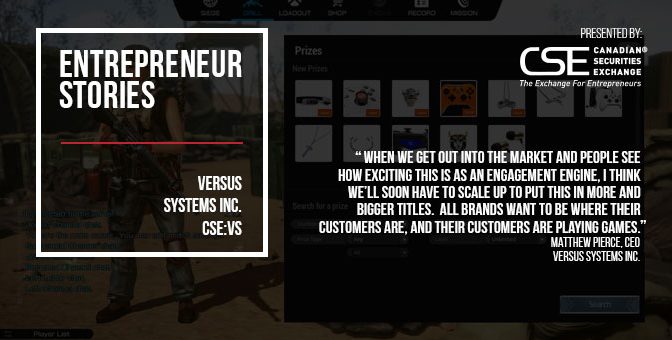 The precise number depends on the source you choose, but multiple surveys indicate that people spend hundreds of millions of hours playing video games every week. And that’s just in North America.

Considered another way, the Super Bowl and its famously expensive commercials attract around 110 million viewers in the United States, yet that occurs just once a year.

Clearly, then, video games are media – and immersive media at that – with millions of people engaged at any given moment. And most players pack enough disposable income that brands want very much to reach them.

The billion-dollar question is how to introduce a level of commercial marketing into the gaming environment such that it makes a positive impression on behalf of a brand, as the last thing you’d want to do is turn gamers off by being intrusive or annoying.

Versus Systems (CSE:VS) is confident it has the answer, and it revolves around encouraging both avid and casual gamers to opt into an environment where products and brands are featured in a way such that players become eager to interact.

Gamers are naturally competitive, so the idea of offering the chance to play for more than just an ephemeral digital points total makes sense. Playing for valuable prizes introduces a new degree of meaning to the activity, and it is this dynamic that is enabling Versus Systems to draw interest from an increasing number of brands searching for new ways to market their products.

“We’ve created a platform that does two things,” explains Versus Systems CEO Matthew Pierce. “First, it allows publishers and developers to offer prizes within their games to drive engagement. It makes them more fun to play and the idea that you can compete for everything from downloadable content to physical goods to energy drinks and concert tickets is an enormously powerful opportunity.

“The second thing it does is allow brands to be part of a promotions engine for in-game advertising and connect those brands to players and spectators. Our belief is that if you make it fun to try to win prizes and make it aspirational, and you find products that players actually want to play for, that is a really rich opportunity.”

The origin of Versus Systems is a fascinating story and helps explain not only where the core idea came from, but why the company is positioned to succeed in a business with immense challenges, both technical and legal.

Pierce is a Stanford graduate who started his own companies and worked for large consulting groups. Versus Systems was founded in a technology incubator Pierce worked in, but it was an incubator with a twist. Not only was it full of programmers and engineers with incredible skills and entrepreneurial zeal, but its main backer was a law firm, and this is the team’s secret sauce, if you will.

“The thesis was to work in areas that took advantage of the partners’ strengths,” says Pierce. “We thus wanted ideas that were technically complex, and we also needed the regulatory landscape to be complicated because we had access to tremendous attorneys. We are versed in the entertainment space and thus wanted to keep things in that sector. The first company we incubated was Versus and it is the best project I have ever worked on.”

Players who want to compete on the Versus platform must first download an app to their phone or computer so they can log into the community. Once in, a player finds that the Versus experience is additive and does not interfere with their fun by adding the conventional overlay of monetization approaches common to many games these days. Rather, Versus enables players to determine the parameters of interaction themselves.

“You log into your game and a new set of menus appears when you go to play,” explains Pierce. “Players can choose to play for money, for physical goods, or for downloadable goods. You can also decide if you want to play one on one, or perhaps one on five where the top three players win a prize. And gamers often like to play people they have invited because it means something if they can beat them.”

The beauty of the business model from the Versus Systems perspective is that the company does not have to make large financial outlays in order to attract users to its platform. As it aligns with popular games, players will naturally find Versus and its competitive options on their own.

For game developers, the appeal is a platform that is a total solution, managing prize and competition details for players, while also addressing administrative challenges they surely would rather have someone else take care of.

“The concept of creating a platform that solves a lot of the legal and regulatory burdens faced by game developers and publishers was an important part of the genesis of the company,” says Pierce. “We call the approach dynamic regulatory compliance, as we make sure that prizes are only available in regions and countries where those prizes are legal. It is a new approach and we have been writing patents to protect the intellectual property since 2014.”

Versus generates a number of revenue streams from its involvement with each game, the most important being revenue-sharing agreements with developers and publishers when brands pay to offer products or gamers choose a pay-to-play option from the platform. Integration fees help the company cover up-front costs.

“It has to be bespoke integration,” says Pierce. “Nobody knows the players better than the developer and we don’t want to take them out of that world. I don’t want this to be something that in any way detracts from the gaming experience, but rather helps to make it more engaging.”

Pierce and his team are currently working to integrate the beta model of the platform into a handful of games, while at the same time adding prize providers and signing up brands, some of which he expects to be very big names. Rapid expansion of the company and its reach is expected to follow.

“The games we are working with early on are really great,” says Pierce. “When we get out into the market and people see how exciting this is as an engagement engine, I think we’ll soon have to scale up to put this in more and bigger titles. All brands want to be where their customers are, and their customers are playing games.”

This story was originally published at www.proactiveinvestors.com on Mar 1, 2017 and featured in The CSE Quarterly.

Learn more about Versus Systems at http://www.versussystems.com/ and on the CSE website at http://thecse.com/en/listings/technology/versus-systems-inc.