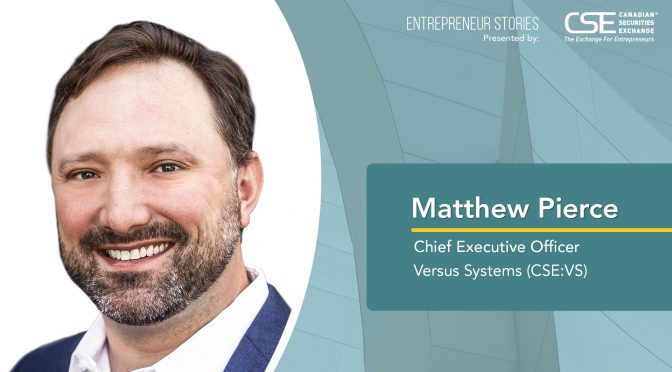 Versus Systems (CSE:VS) is disrupting the conventional advertising landscape with an innovative choice/reward model. The company’s main focus is the esports sector, where game developers use its WINFINITE platform to create competitions that provide players the chance to win a variety of attractive prizes.

The platform can be accessed via mobile, console, PC games and streaming media, and thanks to that reach some half a million prizes have been awarded already. WINFINITE is used for games in the US and Canada right now, with a UK launch slated for December. Plans call for making it available in continental Europe in the first half of 2020, and in China around mid-year.

In August of 2019, Versus struck a licensing deal with hardware giant HP that will see its technology used in a variety of HP products and services. Public Entrepreneur caught up with Versus Chief Executive Officer Matthew Pierce last month to learn more about the company and its considerable potential.

How is the advertising landscape changing and how does Versus fit into that?

And as content, as media, as games, as shows and all those things become more interactive, and more choice-based and more tailored to the viewer or the player, so too does the advertising. The advertising needs to be just as thoughtful. And for us, the marriage of choice and reward, which is to say that when you get to choose what you want to play for or you get to choose what you’re trying to win, it introduces the idea of earning it, so it no longer feels like an ad, but rather a prize. It feels like something you’ve earned and that makes all the difference.

Can you explain how WINFINITE works and how you came up with the idea?

In any Versus-enabled content, whether it’s a show, a fitness app or a video game, when you enter into the experience, when you’re about to load up the game or when you’re about to watch your show, there’s a menu that asks what you want to play for. You can choose anything from downloadable content in a video game to trips, to apparel, to food, to electronics. There’s a huge number of things that we’ve given away, from tickets to BlizzCon to hats and shirts.

Users see a win condition that says, “If you do this then you will get this, or if you do that then you will be entered into a sweepstakes to get that.” People try to win the race or crush the right amount of candy and then you get sent a message saying that you either won it or you didn’t. If you didn’t, you try again or try to win something else. It doesn’t interrupt the show or the game. It’s there to enhance the experience.

The company came out of an incubator whose limited partners included a large software development firm, a large law firm, and people with strong media backgrounds. The idea was to create something that’s in a really thorny regulatory space that is also difficult to achieve technically.

Is it fair to say you’re focused mainly on the gaming space?

We very much like the gaming side of things. We also like things that look like games. Games are already made such that there’s what we call a “win condition,” and the win condition is very clear inside of a game – save this town, crush this candy, find the loot. That’s a really rich environment for us. But I also keep bringing up fitness because fitness looks a lot like a game as you try to run a certain distance or achieve specific goals.

What sort of feedback do you get from players?

Ninety seven percent of players interviewed that have used the platform say it makes the game more fun. And that is not true of most advertising, right? We did a huge survey with UCLA last year to talk about user behaviour and how people interact with media and it confirmed that people don’t care for ads. But 97% of people who play for rewards say rewards make the game more engaging. Once introduced to prizes, people play more and there’s not an ad unit anywhere that makes people consume the content more frequently.

How do you make money from this?

The business model works in classic advertising fashion, which is that the brands that want to reach these players pay to place their products inside of the content, the difference being that our engagement rates are minutes rather than seconds, and the transaction rates are measured in whole percents, rather than hundredths of a percent.

You’ve struck a number of partnership agreements. Is there one deal you are particularly proud of?

The HP deal is massive. HP is a US$50billion company and we have a multi-year deal. They are well known for being safe and secure, and conservative and thoughtful and the idea that they would partner with us, I think, suggests that we’ve worked very hard to be a credible, trustworthy, thoughtful, capable company. HP sells tens of millions of computers a year and they’re one of the most highly respected hardware manufacturers on earth. They have access to not just gamers, but to anything you can do on a computer that you want to encourage or incentivize. We can put rewards around things other than games. The platform also works extremely well for fitness apps and certain business applications.

What would you say to potential investors about the group’s future targets?

Learn more about Versus Systems at https://www.versussystems.com/.