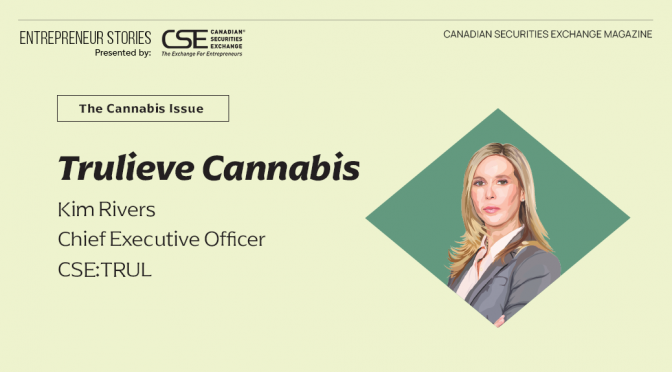 Trulieve Cannabis (CSE:TRUL) is one of the cannabis industry’s major success stories, with many of its biggest achievements occurring in the four years since it became a publicly traded company. The Trulieve team focused on innovating and leading Florida’s medical cannabis market at first and then expanded into new jurisdictions, the prudence of its strategy confirmed by strong profitability.

As Trulieve Chief Executive Officer Kim Rivers explains, community and advocacy have been at the heart of the brand since the beginning.

In one example, Gadsden County, a majority-minority community in northern Florida where Trulieve built its first cultivation facility, has seen the company grow to become its leading employer, according to Rivers.

“We’ve had a material impact on the jobless rate there and pride ourselves on the difference we’ve made in that community,” Rivers says. “That story has been repeated in other communities that we’ve gone into, particularly on the cultivation and manufacturing side of the business.”

Since its launch in 2015, Trulieve has expanded quickly, now operating more than 4 million square feet of cultivation and processing capacity, more than 175 dispensaries and with operations in 11 states. The company is the largest medical cannabis operator in Florida, having recently celebrated the sixth anniversary of its first retail sale in the state, and is a top player in its other core markets of Pennsylvania and Arizona.

As it grows, the company has been able to keep its values of community and advocacy at the forefront by entering into new markets with specific characteristics. “Where we chose to make investments and how we chose to go into a community is thoughtful and purposeful,” Rivers explains. “It allows us opportunities to have a deeper connection with the communities, customers and patients that we serve.”

In addition to Trulieve’s internal community-focused initiatives, such as its supplier diversity program, the company works with a range of organizations, including the Epilepsy Foundation and veteran’s and children’s initiatives. Rivers also highlights the support of individuals qualifying for expungement of low-level cannabis offenses.  Among other benefits, expungement provides these individuals the opportunity to remove the conviction from their record, to participate in the industry and to vote to influence future cannabis policy.

A combination of customer focus and financial discipline has allowed Trulieve to thrive where other cannabis companies have not, Rivers notes.

“We made the decision early on to focus on branded products through branded retail, and we’re not shy or hesitant about growing our scale in both supply chain as well as our retail network,” she says. “That gives us the ability to build more durable relationships with the customer and have more control over the customer journey.”

This approach is clearly working, with the company reporting strong Q2 2022 results despite a challenging macroeconomic backdrop, including pressure on the company’s wholesale segment.

Trulieve reported a 49% year-over-year revenue increase in the quarter to US$320.3 million, including a 3% rise in retail revenue to $298.6 million. “We’re proud to see strong customer loyalty continue in the first half of the year,” says Rivers.

The company also posted a 17% EBITDA increase to $110 million and finished the quarter with $181.4 million in cash.

The success of Trulieve’s approach is also evidenced by its expansion of operations into other markets, including Arizona, California, Massachusetts and Pennsylvania. Almost one-third of the company’s retail operations were located outside of Florida as of the end of the second quarter.

While Rivers notes that each new market has unique challenges due to differing regulations, Trulieve has found many aspects of its Florida business model to be transferrable, including operating and manufacturing procedures and market analysis.

According to Rivers, the company has been thoughtful in terms of how it can share resources across its broader platform and gain efficiencies where possible, citing the company’s nutrient program as an example.

Currently, the company is unable to transport cannabis products across state lines, but it can transport nutrients, and its nutrient blends are used across all of its sites in the US. “We also do a good bit of our research, development and innovation work in Florida because we have the ability to do that at scale,” she says.

Rivers also points to the company’s team as a key strategic advantage. “We have individuals who have operated within our Florida market and been a meaningful part of our scaling of operations from when we were initially three stores to now more than 100 stores in the state,” says Rivers. “Being able to take these lessons and apply learnings across different markets has been invaluable.”

For Trulieve, the year 2022 is about organic growth, as more states enhance their medical cannabis programs and pivot toward recreational use. Rivers says the company has focused on its branded products and branded retail while optimizing the portfolio of Arizona-based Harvest Health & Recreation, which the company acquired in a $2.1 billion all-stock deal in October 2021.

As part of that effort, Trulieve divested non-core assets and operations, one recent example being the decision to discontinue wholesale operations in Nevada.

“Sometimes it’s just as important what you don’t do as what you do,” Rivers says. “The goal is to enter 2023 as a stronger company positioned for the opportunities we see ahead of us.”

Despite recent remarks by political leaders in support of cannabis policy to cover state banking or criminal justice, Rivers notes that progress around cannabis reform on a federal level has been slow.

However, she remains hopeful that the encouraging discussions will morph into actual policy. “It’s very apparent that this is a popular issue due to the amount of conversation that it is getting before the midterm elections,” says Rivers.

One particularly important jurisdiction for Trulieve going forward is the southeast US. Rivers says the company has been “very bullish” on this region, citing recreational cannabis initiatives in Maryland as just one reason.

Another key area for growth is recreational cannabis opportunities in the company’s home state of Florida, which already has an 800,000-patient-strong medical cannabis market.

Trulieve backs the Smart and Safe Florida Act, a proposed constitutional amendment that would allow the recreational use of cannabis by people aged 21 or older in Florida. The company is hoping it will appear on Florida’s November 2024 ballot. Trulieve has contributed $5 million to help get the proposed amendment on the ballot.

“That will be a massive catalyst for our industry and certainly for our business, with 21 million residents in Florida and up to 130 million tourists visiting the state a year,” Rivers concludes. “We think our strategy will continue to serve us well in emerging markets as they develop but certainly also as the landscape on the federal side transforms.”