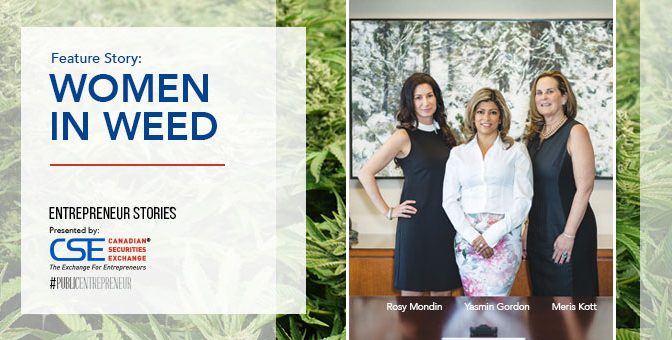 It’s a common story thread: women entrepreneurs blazing the way for cannabis, taking over the sector and inserting themselves into a market that is booming, complicated and fast-evolving.

Stop. Back it up. Wait a moment. This is not one of those stories.

It’s an easy – perhaps a bit lazy – trend to latch onto, one that weaves itself through the cannabis daily news cycle. “Women in weed: charting change for male-dominated cannabis culture,” blared a CBC headline earlier this year.

This is not to say that women aren’t powerhouses in the world of cannabis. They are: just like they are in each and every other sector, when put in positions of power to do so.

In order to survive in this sector, you have to have strong chops, a killer resolve and the tenacity to do whatever it takes. It’s that entrepreneurial spirit that is key. Being a woman just happens to be one part of the equation.

Proactive Investors spoke to four women who touch different corners of the cannabis industry. From financiers to investment bankers, from equipment manufacturing to recreational advocates, we chatted about their past, predictions and what might roll out ahead.

Redfund Capital (RFND:future symbol) is a cannabis merchant bank that provides an alternative source of capital through a debt facility to bridge finance and helps revenue producing cannabis related companies build their valuation, and grow their company without diluting their equity prematurely, while helping move them toward being publicly listed.

Q: Tell me about how you got into this industry. What led you here?

MK: I come from an investment banking family, which funded emerging market growth companies. About 12 years ago, we started looking at the cannabis industry, and we didn’t touch it, figured it wasn’t ever going to happen. We got into the industry in 2012, after Amendment 64 passed in Colorado. We’re now launching the first debt facility merchant bank, Redfund Capital Corp., focused on funding cannabis related revenue producing companies.

YG: I am a Senior Investment Advisor with Canaccord Financial, specializing in non-traditional wealth management strategies with a niche in providing financing opportunities. I came into the cannabis sector, quite honestly, out of necessity – I could see there was a shift occurring as we got more clarity with regard to full out legalization in Canada. I saw the opportunity and decided to add exposure in a more significant way. It’s been an exciting ride.

RM: As CEO of Quadron Cannatech, and a leading advocate for the legalization of recreational cannabis in Canada, I’m thrilled to be at the forefront of this emerging industry. I’m the director for the Cannabis Trade Alliance of Canada (CTAC) and I also serve as a Special Advisor to the Canadian Association of Medical Cannabis Dispensaries (CAMCD). In my role with CTAC, I work with industry leaders, government legislators and educators to develop an inclusive, safe, and ethical cannabis industry.

RK: I’m the vice president of HR at Hiku. Back in 2013, we saw an opportunity in getting into commercial cultivation, so we put in our application. We received our license to sell just this year. It’s been a long road but here we are. We merged with Tokyo Smoke in January. We then just recently merged with WeedMD in a pretty transformational transaction: combining a premium cannabis brand house and retail-focused operator.

Q: For some women, this might not be a sector that immediately comes to mind as a place to be. What advice would you give others who may not have considered this sector as a career path?

MK: Jump in! Because right now we’re creating a whole new industry. That said, it has changed and it’s become harder to break into the industry as a woman because it’s becoming more mainstream. Women are generally the chief medical officer in their family and looking at cannabis products more closely. I also think because it’s such a new industry people don’t consider it as a career path and it is still a risky avenue for work to some women.

RM: We are building a new industry – we currently have just over 100 Licensed Producers across Canada. If you think about most industries, 104 commercial licensees nationally in the sector is not a true industry. We are slowly seeing more ancillary businesses coming into the fold: legal, accounting, marketing, government relations, business development, branding, packaging – and banking (slowly). In addition, the cannabis industry has been operating in an under-regulated space (as there was no other option). Now there’s a lot of opportunity during this transition into the regulated market. There’s just so many areas that you can jump into as we build a whole industry so it’s really up to your own imagination as to which way you want to go and how to get your feet wet.

Q: What trends do you expect to see when recreational comes online later this year?

RM: I think the biggest shift will be the consumption of cannabis moving away from smoking traditional flower to products that are extract-based. Extracts form the basis for the majority of cannabis products outside of smoking: vapor-oils, capsules, tinctures, sublinguals, transdermal patches, edibles, topicals, suppositories, infused beverages. I have no doubt that we’ll see different consumption methods and further product innovation. I think the sky’s the limit.

MK: I’m going to wear my American hat here. I think we’re going to see a huge influx of American companies that have already been working with Canadian companies on many of their products, move more into the market. I think the Americans are going to flood our market with new brands, technologies and licensing agreements, as well as other countries who have approved recreational cannabis already. It can only help create a successful global marketplace.

YG: I see a shifting consciousness as to what legalization means for cannabis as many people will be forced to redefine what they know about the potential benefits of cannabis as a therapy option.  You know I find it very interesting with my clients. There’s a divide in my book of clients: there are those that are for investment and those that still believe it’s a gateway drug. I believe perceptions will swing more positively as the public receives further education about the medicinal benefits of cannabis.

RK: It’s interesting when we talk about recreational. It’s a national movement that’s going to have so many ripples of effect. I’ve always believed that vaping and very clean, efficient methods are going to be preferred. However, we also believe that there’s a segment of the market, maybe 10% or so, that wants a curated strain and they want it in its entirety. It’s similar to going to a winery. You want to talk to a winemaker about how it’s grown, what it looks like, feels, tastes, etc.

Q: We’re seeing a lot more mergers and consolidations in the space. How do you differentiate yourself in a crowded market?

MK: In Canada, the companies are much smaller than other global players, although they are financed with plenty of capital. That said, you will see more consolidation between U.S. and Canadian companies. It is going to be about a recognized branded product first off.

RM: Like any industry, we’ll see consolidation, mergers, acquisitions and we’re going to see some businesses that will not make it – it’s the nature of any business. Look at the restaurant industry. It’s one thing to have a good idea: it’s another thing to actually execute it, using the restaurant example, understanding how to run a kitchen, avoid food-waste, or manage front-of-the-house. There will be consolidation, as licenses get scooped up through mergers. It’s just the normal course of a new and growing industry which continues to shift and evolve.

RK: There’s room for a range of different products in the competitive landscape. At the end of it, it’ll be key to have a really quality product, and maybe do fewer things but do them really well.

Q: If there’s one lesson you’ve learned in the industry, that you think other women should know, what would it be?

YG: Being aware of trends as an investor in the industry. It’s shifting so quickly. It’s almost mind-blowing. Retail investors need to be aware of how quickly the industry is transforming and the trends that are coming out that make a buy and hold strategy not likely the most effective way to play this market given the volatility we are witnessing.

RM: This is a 21st-century industry and women can play a leadership role from day one. For example, as a business leader in a new industry, I don’t think sitting back and just accepting the regulations at the government tables is acceptable. We’re getting out there and helping define the rules as the country moves forward. I think this kind of thing is really important. How do we encourage business investment and faith into the industry? I think having strong leadership, especially more women, can help.

MK: When I started in the industry it was two camps: medical marijuana and marijuana. Then we started talking about cannabis. It’s an industry now, a true marketplace. I think that from an entrepreneur’s point of view it’s become a cannabis investing haven. Just the fact that there are so many people involved, and that you can go on the CSE website and find a company directory in cannabis is exciting. There’s a mining sector, and now there’s a focused cannabis sector. Welcome to the industry.  It’s not going anywhere.

RK: Don’t be afraid to be visionary.  The industry is moving so quickly. Look to something you think you understand or that you can replicate with confidence. Another country, another model, don’t be afraid to try unique things. Don’t feel that you have to do what everyone else is already doing. The future is ours to create.