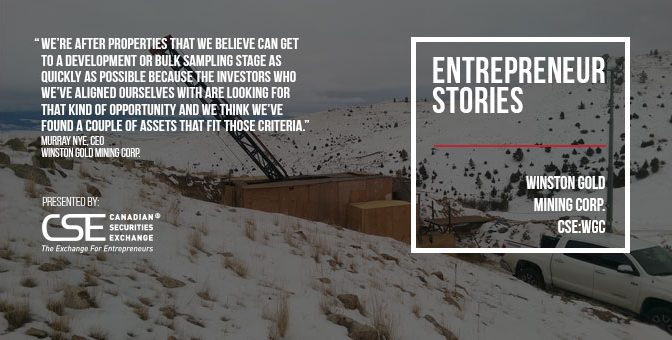 Throw in an experienced management team and you’ve got what many would see as the complete package.

With its two assets and strong mining team, Winston Gold Mining, which raised C$545,000 when it listed on the CSE last March, appears to tick all of these boxes.

While it is still in the early stages of developing its Gold Ridge property in Arizona and its namesake Winston project in Montana, the company holds historic data (particularly on the latter) which suggests both projects have more than a fighting chance of success.

Winston is located near Helena, Montana – an area with a rich mining history dating back to the 19th century.

The district is reported to have produced 100,000 ounces of gold from only 150,000 tonnes of ore back in its heyday at an impressive average grade of 22.8 grams per tonne (g/t). A quick look at the records will tell you that the Custer mine – which lies within the Winston property – was a major contributor to that figure.

Similarly, the Gold Ridge project near Willcox in Arizona yielded some good grades in the past, too.

“It was acquired from some people we know very well. It’s also a historic mine, but not quite as prolific as the Winston claims,” explains the company’s chief executive Murray Nye.

The Gold Prince deposit on the project was mined sporadically between 1932 and 1996 and produced 22,000 ounces of the precious metal from multiple veins, averaging almost 12 g/t.

The low price of gold back in the eighties forced the previous owners to move out of the property, but Nye’s interest was piqued by what was left behind.

“What we liked about that was that it had a lot of development done already. They had set up two drill stations underground and we went down and checked it out and they were both in good shape,” he explains.

“Both the drill stations were ready to go and drill below the level they were mining, so we thought there was a pretty good opportunity to start some bulk sampling or test-mining there on a near-term basis.”

This is exactly what Nye and his team look for when assessing potential projects.

“We’re after properties that we believe can get to a development or bulk sampling stage as quickly as possible because the investors who we’ve aligned ourselves with are looking for that kind of opportunity and we think we’ve found a couple of assets that fit those criteria.”

Given that it only acquired Gold Ridge at the back end of last year, not much additional work has been carried out at the property. The company’s primary focus has been on its flagship Winston property.

“We think it has more opportunities in terms of tonnage,” says Nye.

The project had around 630 holes drilled down to around 100 metres or so as the previous owners tried to assess the potential for an open pit operation. They estimated it could be host to around 500,000 ounces of gold, potentially more.

“That’s not 43-101 compliant but it certainly gives us an indication that there are some pretty good gold values in the property and many of them were very high grade,” says Nye.

The CEO and his partner Mike Gunsinger think the real potential of the Winston project lies in the untested geology further below ground.

“Our thinking is – and three geologists have also told me this – that this project is better suited to underground mining. What we’re doing now is drilling underneath where the old workings are.”

Recent results would seem to back up this theory. In January Winston appeared to locate a “high-grade gold vein which could be amenable to underground test-mining.”

Drilling along the Edna-West vein, as it has now been called, yielded grades of 8 g/t up to 44 g/t.

The bonus of these high grades is that it would make the project relatively low-cost.

But it’s not just the grades that make Winston such an exciting project; the fact that the infrastructure is already in place is also a plus-point.

“There’s a major highway within a half-mile of the property and there’s a major power line running right through the middle of it,” says Nye.

“The elevation is also low by Montana standards so Winston would lend itself to year-round operations.”

The plan is to carry on drilling here for another few months and then go underground, with a view to getting into production within two years.

“If we were to start something [underground] eight months from now, you’d be doing the development which would probably take another eight months,” explains Nye.

“Depending on how long the vein is and what you’re mining it would at least take you another eight months to develop that into a shrinkage stope operation.

“So within a couple of years – maybe a year and a half – you’d be in a production scenario if everything went to plan.”

“Our goal is to develop underground access and gradually ramp up to a 300 tonne per day test-mining stage. If all goes according to plan we believe we could achieve this for about CDN $10 million.  Of course the ultimate number of ounces produced will depend on the average grade recovered.”

That’s not a lot in mining terms, but it is a tough ask for a fledgling business. But that there is where the experience and connections come in.

Winston is the second mining company Nye has headed over the past decade, and before that he was involved in financing projects, while Gunsinger has over 50 years of mining experience to draw upon.

So they know mining money people and are also pretty well up on the laws and regulations, especially in Montana.

“Operationally we’ve got a very experienced mining team and management is key in this. We’re very familiar with the state, the regulations there and we have very good relations with regulatory bodies,” says Nye.

The one thing Nye can’t control is the price of gold, although things are starting to look up here too.

“The gold market, in my opinion, is a place to have a serious look right now – it bottomed out but now seems to be back on an uptick,” the Winston CEO says.

Is this another box ticked for Winston Gold Mining? Very possibly.

This story was originally published at www.proactiveinvestors.com on Feb 16, 2017 and featured in The CSE Quarterly.

Learn more about Winston Gold Mining at http://winstongoldmining.com/ and on the CSE website at http://thecse.com/en/listings/mining/winston-gold-mining-corp.