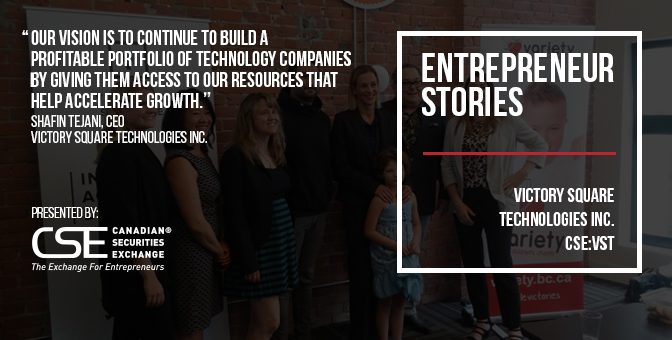 Incubator fund Victory Square Technologies (CNSX:VST) is a potential answer to their prayers.

Victory Square not only invests in innovative entrepreneurs, but provides them with a network of mentors, distribution partners, education programs, access to over 80 accelerators globally, and various other resources.

The Canadian company might be better known to some investors as Fantasy 6 Sports, which listed on the Canadian Securities Exchange in May 2016.

Change in busines model occasioned a change of name

In June of this year it changed its name to formally reflect the switch in business model to a venture builder that creates, funds and empowers entrepreneurs predominantly focused on blockchain technology, virtual reality, artificial intelligence, personalized health, gaming and film.

“Our vision is to continue to build a profitable portfolio of technology companies by giving them access to our resources that help accelerate growth,” says Tejani.

The genesis of Victory Square goes back further than 2016, however.

“Given our record of successful results, we decided to create a public portfolio to scale faster. The first company the public vehicle targeted was Fantasy 6 Sports due to its high growth potential and the fact that sports and mobile gaming is global, it transcends geography, language, culture, etc.,” Tejani explains.

The fantasy sports company was, if you like, the advance guard for the rest of the Victory Square army.

“The entrepreneurs, IP [intellectual property], experience, talent, customers and partnerships that we established in these diverse verticals laid the solid foundation for the current and future portfolio of companies in Victory Square Technologies,” Tejani says.

The management team has broad experience in depth

Key to the company’s business proposition is the management team, which has a broad range of experience that matches the company’s areas of specialization.

Tejani has successfully launched more than 40 start-ups in 21 countries, employing hundreds of people and generating more than US$100 million in annual revenues.

He’s been there, done it, and he’s not only bought the T-shirt but probably knows the people who designed it and the creators of the technology they used to produce it.

Director Howard Blank has been an executive of the gaming and entertainment sector for more than 30 years, most recently serving as vice president of Media, Entertainment and Responsible Gaming for the Great Canadian Gaming Corporation.

Fellow director Tom Mayenknecht’s career spans journalism, television, professional tennis, executive management leadership with both the Toronto Raptors and Vancouver Grizzlies of the National Basketball Association, and the start-up of what is now Rogers Arena. He’s probably not the guy to challenge to a game of tennis at the office party.

Peter Smyrniotis, another director, is described as a “technologist”, as well as an entrepreneur and commercialization and growth professional based in Vancouver.

Tejani is adding to the depth of the team as his portfolio grows and expects to announce some pedigree additions in the near term.

The team also leans heavily on thought leaders at the companies it funds, both privately and through the company. The expertise these executives bring has proven invaluable in analyzing business opportunities.

The first moves were into film funding and personalized health technologies

Since its metamorphosis into an incubator fund in June, the company has made two major moves.

The first was to acquire a 40% interest in Unified Film Fund II, an entity that will be producing three major films in 2017 and 2018.

Two of the three could garner worldwide distribution right receipts of around US$14.4 million given estimates projected by talent agency William Morris Endeavor Entertainment and other sources.

Victory Square acquired its stake in the fund by issuing five million shares at an assumed price of $0.85, so essentially the stake cost C$4.25 million.

Shortly after strengthening its presence in the film and entertainment arena, it created a new venture, Victory Square Health, to oversee companies in its portfolio working on personalized health technologies.

Victory Square Health’s initial mission will be focused on management and prevention of the modern scourge that is diabetes.

Victory Square Health will make some introductions and provide technical development capabilities to its chosen projects.

Tejani believes personalized health is the future of medicine and that the team and partnerships Victory Square Health has established will allow it to be at the forefront of the rapidly growing health tech industry. Through strategic resources and technical development capabilities, Victory Square Health will use its relationships with seasoned industry experts, including Dr Bruce McManus and Dr Pieter Cullis, institutions such as the University of British Columbia and Simon Fraser University, and organizations such as BC Diabetes with leading endocrinologist Dr Tom Elliott.

Some might expect Tejani to be carrying out this sort of activity in California’s Silicon Valley, but in fact British Columbia is awash with technology companies.

“British Columbia is a great place to build a tech company,” Tejani asserts.

“There is exceptional talent in B.C. and Canada as well as strong government support through funding and tax credits. B.C. has become a great place to build a tech company and Victory Square is looking to fill the gap by helping to fund promising early-stage companies.”

So, there are plenty of great candidates to go under Victory Square’s microscope, and better still, they won’t be expecting California-style levels of financial backing.

“We take great pride in being based out of Canada, and British Columbia specifically. Both the federal and provincial governments have made it a goal to continue to foster innovation, which can be clearly seen by the provision of integral grants and credits,” says Tejani.

“Victory Square has fostered relationships with these bodies to utilize financial opportunities and continue innovation…we have a ton of support from the provincial government and other groups like the BCTIA and the Vancouver Economic Commission.”

Victory Square’s current market capitalisation is around C$37 million and the group is focused on building businesses with positive cash flow and exponential growth potential.

Which brings us to the subject of valuing Victory Square.

It is the nature of incubators that they fly below the radar for long periods, investing money for little return until they cash in, perhaps through a trade sale or stock market flotation.

It’s at that point that the value is crystallized; otherwise, analysts must make their best guess at the worth of the portfolio, based on values of similar companies.

Having said that, the company is not plowing its cash into money pits.

If 2017 is earmarked as the year the company scales up, then next year should be the one where it strides toward profitability, powered by revenue from its film investments and personalized health initiatives. Tejani is motivated to find liquidity events along the way that will allow companies in the portfolio to find new funding sources and grow their investor bases.

Few can deny that tech, leisure and healthcare are markets with massive growth potential.

“Tech is exponential and our first goal is to build or acquire businesses we can continue to scale. These profitable companies provide us with the option to take them to the public markets, or exit to a larger player. For example, a healthcare company we have funded will have the potential to be acquired by bigger players in the pharmaceutical space.”

In the meantime, it is just a matter of sitting tight and trusting the skills and judgement of a team that collectively has more than 100 years of award-winning entrepreneurial experience.

This story was originally published at www.proactiveinvestors.com on August 23, 2017 and featured in The CSE Quarterly.

Learn more about Victory Square Technologies at http://www.victorysquare.com/ and on the CSE website at http://thecse.com/en/listings/technology/victory-square-technologies-inc.