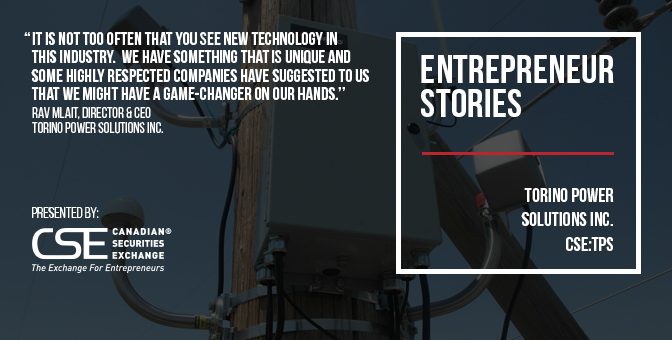 There are more than a few companies worldwide selling equipment to monitor the transmission lines that deliver power to our offices and homes, but none has products like Torino Power Solutions (CNSX:TPS). It should come as little surprise, then, that Torino CEO Rav Mlait speaks excitedly about the company’s outlook, fully understanding, as he does, the clever technology that makes its products so unique.

Before getting to that technology, however, a revealing story about the electricity we use every day is in order.

Power transmission is not nearly as efficient as the general public might think. From the time electricity leaves a power plant to the time it reaches its end user, it is common for somewhere between 6% and 15% of the power to be lost, and many estimates reach even higher. The losses occur for a variety of reasons.

So, how do many electrical utilities gauge the temperature of their lines to optimize the amount of power flowing through at any given time? Would you believe by referring to historical weather pattern charts and ambient temperature readings?

Despite the imprecision inherent in such an approach, Mlait confirms that the practice is common. Now, what if the utility were able to know what the temperature actually was along different sections of a long transmission system such that it did not have to underutilize its infrastructure?

That’s the issue that Torino addresses. And with over $10 million spent on R&D, plus patents in place, the time to push for widespread adoption of the company’s solution is at hand.

Torino’s “Powerline Monitoring System” is a combination of a hollow aluminum sensor placed on a power line, combined with a nearby “interrogator” that reads microwaves bouncing back from the sensor. The sensor expands and contracts according to the heat of the line, and an algorithm in the interrogator converts the signal to a temperature reading that is then relayed to the utility in real time.

“As populations grow and distributed connection resources such as wind and solar gain prominence, it is putting the existing electrical infrastructure under more strain and causing wear and tear,” Mlait explains. “Part of the solution is better data, and it all ties into the industrial Internet of Things concept whereby real-time information enables system administrators to make better decisions.”

Torino is not the only company to conclude that there must be a better solution for monitoring line temperatures, but it is the only one with a passive sensor. Mlait says that all competing line sensors require power sources, in the form either of batteries or the power lines themselves. “So, if a power line goes down, their sensors can go down with it. Ours won’t, and that is part of our competitive advantage.”

Another advantage comes in the form of economics. Torino will deploy a system, which is comprised of three sensors and one interrogator, for between US$40,000 and US$50,000, or approximately half the cost of its rivals’ installations.

“Having more data from more lines, and thus a richer data set, is a better way for utilities to manage their assets and conduct dynamic line ratings,” explains Mlait. “That is one of the reasons we priced our technology where we did, so that utilities can deploy more sensors for the same cost.”

Mlait claims that utilities can quite easily recover up-front costs within 12 months, enabling the return on investment to stack up quickly.

Consistent with the early stage of the product roll-out, Torino’s solution is being used by a single utility at present. Tri-State Generation and Distribution Association installed the system on a trial basis last year in eastern Colorado. In what can only be taken as a good sign, it added to the trial in June of 2017 by moving a second system to a more critical location in western Colorado.

“Utilities are conservative when it comes to adopting new technologies, and understandably so,” says Mlait. “They want to really examine new equipment before deploying it extensively throughout their expensive infrastructure.”

Mlait says that he and his team are in discussions with a number of utilities both in North America and overseas, and while nothing has been finalized, observers shouldn’t be too surprised if additional installations make news before long.

Another component of the marketing strategy is to potentially ally with distribution partners with reach into markets that Torino has yet to develop. “We are a relatively small company, so the idea of partnering with a large distributor is pretty significant,” Mlait says.

Word is definitely getting out because Torino has started developing new products based on feedback from potential users. The company recently initiated development of a system for distribution lines, which are the smaller power lines operating inside urban areas. Urban power lines often heat up and sag, causing a host of challenges such as power outages and clearance issues, so a robust solution in this environment would be most welcome.

The other development program announced recently involves underground sensors. Mlait says that potential clients have asked if products are possible for applications such as subways and other underground infrastructure.

“People in cities such as New York, London and Toronto know that there are significant down times associated with underground systems, largely owing to deterioration of aging lines,” says Mlait. “We have heard about the need to better monitor these cables as they continue to deteriorate and are looking to provide a solution down the road.”

With a cost/benefit ratio that makes sense and a need within a crucial industry that cannot be denied, the potential clearly exists for Torino’s sensors to gain broad acceptance. Installation of a mere 100 systems could bring in over C$5 million on the top line, and there is the possibility for ongoing revenue streams from installations as well.

“It is not too often that you see new technology in this industry. We have something that is unique and some highly respected companies have suggested to us that we might have a game-changer on our hands,” according to Mlait. “From an investment standpoint, we have an advanced product starting to make headway, but a pretty small market cap. Throw in our ability to develop new products as well and we feel very positive about our future.”

This story was originally published at www.proactiveinvestors.com on August 29, 2017 and featured in The CSE Quarterly.

Learn more about Torino Power Solutions Inc. at http://www.torinopower.com/ and on the CSE website at http://thecse.com/en/listings/technology/torino-power-solutions-inc.