It isn’t often that one looks at a company and it’s as though they have thought of everything, with no obvious gaps to fill, no apparent weaknesses. That’s the impression one gets speaking with Steve White, Chief Executive Officer of Harvest Health & Recreation (CSE:HARV). A lawyer before making the leap into running a cannabis company some eight years ago, White is adept at navigating challenging regulatory environments, and communicates with the tone of a professional who knows he’s at the top of his game.

A commitment from a single investor last month to fund the company with up to US$500 million is just the latest sign that Harvest has not only a great track record, but also the vision and ability to execute that separates winners from also-rans in any industry. Public Entrepreneur spoke with White recently about his philosophy on building a successful business in the cannabis sector, and a recent acquisition that will give Harvest the largest presence in the United States cannabis industry.

We’ll get into your recently announced acquisition of Verano Holdings with our second question, but so we have some context, tell us how Harvest got started and some of the key milestones in your development to date.  And where do you stand now in the industry vis-à-vis other companies with similar business models?

We started in Arizona in 2011, so we were really early in the cannabis industry compared to many others in the space today. In terms of key milestones, in 2012 we won two licenses in Arizona.  Those were vertically integrated licenses. What’s important here is Arizona became a helpful training ground for us. We had to get good at cultivating, manufacturing and retailing cannabis – seed to sale. It was completely by happenstance that it was a teaching moment for the future of our growth and ability to master the various aspects of the industry.

Some of the bigger milestones have to do with expansion, and there have been so many that it is hard to isolate any. But one to note is on July 1 of 2017, we merged with a company called Modern Flower, led by a gentleman named Jason Vedadi. That was a moment that really helped to accelerate our growth as an organization.

From there I would have to say the next big milestone was the announcement of our agreement to acquire Verano Holdings, headquartered out of Illinois. That acquisition made us the largest cannabis company in the United States by ability to open revenue-generating facilities, subject to regulatory approval. We’ll have more licenses and licenses to open more facilities than any other cannabis company in the country.

That helps to answer your second question, which is what makes us different relative to our peers. Beyond the ability to win licenses organically and make strategic and accretive acquisitions, I would say the second thing is we have been consistently profitable as a company for many years. The only other multistate operator I knew of that was also consistently profitable happened to be Verano.

The Verano transaction brings two very successful companies together to make you the biggest multistate operator in the US.  Why is Verano such a good strategic fit for Harvest’s existing assets?

It was a perfect fit on three fronts. First, the Verano leadership team and their employees are people who are very easy to integrate into Harvest’s culture because they are a lot like us. And I think most importantly, we like them and vice versa. They are just great human beings with mindsets and focuses that are very similar to ours. So, the human capital in that acquisition was really important.

Second, the assets that we acquired pair perfectly with what we were hoping to put together in the near future. The acquisition has brought us into Illinois, Nevada and New Jersey in a very meaningful way. That represented our list of markets that we really wanted to enter in the near term.

And lastly, they have some great brands that do not overlap with some of the brands we are already producing. For example, in Illinois they represent about a quarter of the wholesale business, and their emphasis is in areas that we don’t have a big emphasis in yet, like edibles.

There is a “landgrab” taking place in the US cannabis industry, playing out partly in a large number of acquisitions. Harvest is growing both organically and through acquisitions. What is your competitive edge versus other well-funded companies in the space?

First, I would say that we can acquire market access organically, meaning we can win licenses when states issue them. Second, we have found that people we look to acquire are believers in Harvest’s stock. With a lot of these acquisitions, the sellers have to decide whose stock they want to hold, and we have a reputation in the industry that allows us, in some instances, to acquire people for less than what they would charge other potential acquirers. And we have seen that in a couple of instances, so that is very helpful for us.

It is difficult to say when federal legalization might take place in the US, but what is Harvest’s industry outlook?  You must have some vision of the industry of the future as you formulate corporate strategy.

Long term, you are going to see a shift away from cultivation.  Phase 2 will be about retail, and Phase 3 will be about brand development. We are planning in everything we do to take advantage of, and create, the infrastructure necessary to capitalize on that evolution of the market.

It’s really interesting in that each individual market evolves separately. So, while you might have a very mature market like California that is, in our minds, almost purely a brand game, there will be other states that just recently came online, and new states where you can see tremendous returns in cultivation. But those new states will eventually become mature states, and so we gear our business to take advantage of cultivation opportunities when we are early and one of few. But generally speaking, our emphasis is on developing a large wholesale and retail footprint.

Harvest recently announced completion of the first tranche of a US$500 million convertible debenture financing. Can you talk about two things: first, the use of proceeds, and second, what convinced the investor to back Harvest to the magnitude, potentially, of half a billion dollars?

First, that half a billion dollars is solely dedicated to growth.  That is acquisition capital and rocket fuel. It allows us, in conversations with acquisition targets, to use more cash. In times when we don’t think our stock is trading appropriately, we can add more cash, so we can keep more of the stock if we think it’s too cheap.

The reason that financier was interested in Harvest was because they are a believer in the long-term outlook of the company. They saw that as an easy transaction for them, and one where they did it on terms that they haven’t done for other people previously.

On a personal level, you are one of the more experienced executives in the industry, and as Harvest’s leader you are pushing the company to grow faster than everyone else. Talk a bit about your background and how that has positioned you to drive the company’s success.

It’s been helpful to be a lawyer in my previous life. The way you plan a case in the law is you evaluate the facts available to you early on, and then you plan a strategy, or a path, to victory. In this case with cannabis, what we were doing is we were evaluating an ever-changing landscape and we were developing a path toward long-term significant profitability.

Your biggest obstacles are regulatory in nature, and as a result the ability to navigate regulatory hurdles – laws, in other words – is really helpful, because you can interpret things in a creative way to give you advantages over competitors, when appropriate, and you are looking toward the end goal, which is long-term, sustainable, and significant profitability.

Any student of markets will know that inefficiency is often a good place to search for opportunity. Given how the federal laws in the US differ with those of the states, and then from state to state, does this fragmented regulatory environment present opportunity?

Is it fair to assume that being one of the more high-profile companies in the cannabis industry, opportunities often find their way to you?

Is there anything we have missed – any important points to get across that we have not touched on?

One of the things that’s most significant about Harvest is that at the time we went public we had very little access to capital. We developed one of the largest footprints in the country by deploying less than $18 million in total invested capital. So, at that time we were a $1.5 billion company with that small of an investment. We have a history of doing a lot with less, and the lessons we have learned that have allowed us to do that are things we deploy each and every day.

A big part of that is a demonstrated ability to execute. Whether that is winning a license or creating a profitable business with very little capital, we have demonstrated time and time again that we are able to do that, and there are not a lot of people who can say the same thing.

This story was originally published at www.proactiveinvestors.com on June 24, 2019 and featured in the Public Entrepreneur magazine. 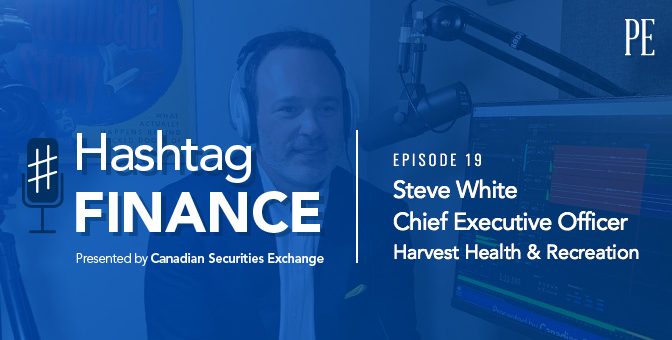 Harvest Health and Recreation CEO Steve White sat down for the final #WeedWeek episode with Grace Pedota to discuss how his company created a cannabis retail experience that had never been seen before (1:45), the importance of opening employment opportunities for veterans, women, and minorities (5:00) and why the cannabis industry is populated by so many ex-lawyers (12:15). Listen to the entire episode to hear Steve’s insight into how the $850m acquisition Verano Holdings materialized.