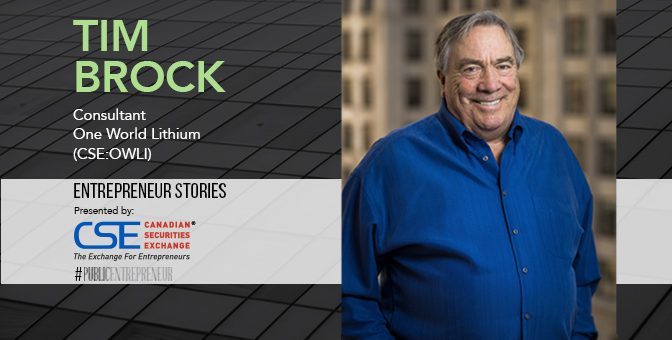 Energy storage sounds very much like a prosaic industry, but it is poised for a boom.  One World Lithium (CSE:OWLI) hopes to be part of the explosive growth.

Tim Brock, a consultant to One World Lithium, or OWL, believes that a junior company with an eye on eventual production must strive to be a low-cost producer with a long-term supply contract.  “One World Lithium has the potential to do this,” he said.

OWL has reason to be excited, given the particulars of its Salar del Diablo property in the State of California Baja Norte, Mexico.  The project covers a large closed basin that provides a compelling exploration setting for the presence of lithium in brines. The Salar del Diablo project has the potential to be a low-cost producer, one reason being that it sits about 35km from San Felipe, a cost-efficient regional service center with a deep-water port that could ship lithium carbonate to customers in Asia and the rest of the world, Brock explained.

OWL expects to have an OTCQB listing in September as well as to be interlisted on the Frankfurt Exchange.

Lithium has multiple industrial applications, including lithium-ion batteries, heat-resistant glass and ceramics, lithium grease lubricants, plus as an additive for iron, steel and aluminum.  All told, this creates demand greater than current world supply.

Demand for lithium-ion batteries for electric cars, storage, and mobile devices by manufacturers in Asia, Europe and North America, has mixed with supply trends to drive lithium prices significantly higher.

In addition, countries are beginning to set dates after which all vehicles sold must be non-internal combustion.

All of this is keeping the energy storage industry on the boil.

The Salar Property is slated for drill-testing in late October 2018.  Plans call for 4,000m of drilling at 11 drill site locations to intersect possible lithium bearing aquifers. The pre-drilling results from geochemical, geophysical and geological work defined over 60 sq. km of potential lithium in brine aquifers (formations). The Salar is approximately 8,000 feet deep, which gives the potential for stacking of more than one aquifer going to depth.

There are five geological conditions that must be present in order to successfully explore for a lithium-in-brine deposit.  These are a closed basin, meaning that no fluids can escape; presence of hot springs; a volcanic source of lithium; faults to transport the lithium to the Salar; and a regional heat source.  The Salar del Diablo meets all of these necessary conditions. As a comparison, these conditions are also present at the Salar de Atacama, which is a similar size to the Salar del Diablo.

OWL has been in discussions with potential buyers as well as offers to joint venture future exploration but elected to drill the property on its own.

The market is watching in anticipation as the Salar del Diablo project is one of the largest lithium-in-brine prospects to be drilled in 2018.

This story was originally published at www.proactiveinvestors.com on August 29, 2018 and featured in The Public Entrepreneur magazine.

Learn more about One World Lithium. at https://oneworldlithium.com/ and on the CSE website at https://thecse.com/en/listings/mining/one-world-lithium-inc.