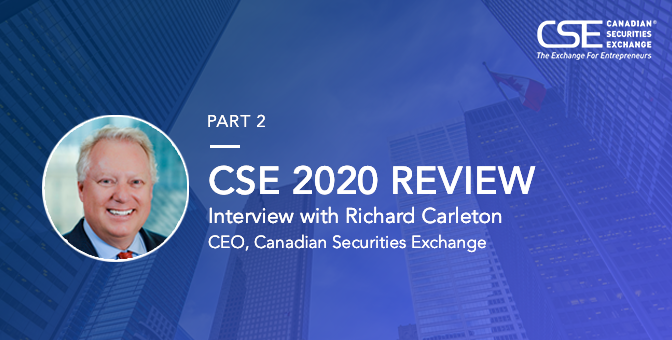 Earlier this month, CSE CEO Richard Carleton sat down with Peter Murray of Kiyoi Communications to recap an eventful 2020 and discuss the coming year for the exchange.

Scroll down to read the full transcript of Part 2 this interview. For ease of navigation, a list of hyperlinked topics is included below.

1. Changes at the board level for the organization

Changes at the board level for the organization

PM: Thomas Caldwell stepped down as Chairman of the CSE’s Board of Directors in September after spending almost eight years in the role. Talk about his contribution to the Exchange as an investor and also as Chairman. How will he continue to support the Exchange’s efforts going forward?

RC: I think it’s fair to say that the Canadian Securities Exchange would not exist in its present form without Tom’s leap of faith back in late 2012 to lead an investment round that provided the exchange with the capital required to continue to offer its services.  In his capacity as chairman, Tom was a relentless advocate for the CSE in his work and with his contacts, which of course are incredibly broad in the exchange world.  He is tremendously supportive of our management team and very inspirational with his “relentless optimism” as he calls it.  His energy, his commitment and his passion for the business were an inspiration not just to me, but to the entire organization.

Tom is not far away, because he is the chairman and principal of Urbana Corporation, which is the largest shareholder of the Canadian Securities Exchange.  In that capacity, we will continue to look to Tom for the benefit of his guidance and wisdom, and his continued support for our organization in its work.

PM: Other changes were also made to the board, with four new members elected at the annual general meeting. Tell us about the new board members, why the time was right to welcome them, and what it means for the CSE.

RC: There were a couple of drivers at the annual general meeting in September, which is when these changes took place.  The first was that we entered into  new recognition orders with the Ontario Securities Commission and the BC Securities Commission, our two principal regulators, and those orders required the exchange to have an independent chairperson.  Mr. Caldwell, by virtue of the shareholding of Urbana, was not considered an independent director of the organization.  Steve Blake, a continuing member of the board, graciously agreed to take on the responsibility of serving as chair.  Steve was elected by the shareholders at the AGM and we look forward to an excellent working relationship with him in his new role.

In addition, we were shorthanded, as former board member Mary Anne Palangio had become our chief financial officer earlier in the year, so we had a vacancy to fill.  And we also had some directors who had indicated to us that they were looking for different challenges, and they moved on with our best wishes.

Our new directors include Hema Barkhouse.  Hema is in the treasury group at Canadian Tire, where she is a senior officer and  has experience in accounting and finance in a public company setting.  Hema is chair of our audit committee and we look forward to her advice in managing the financial situation of the company.

Eric Sites is a resident of Chicago.  He works with Horizon Kinetics, which is one of our significant shareholders.  In his work with Horizon Kinetics, he has overseen investments in a number of exchanges around the world, so Eric is a wonderful addition to our board, both to advise management and potentially to open doors for us as we spread our wings internationally.

Brendan Caldwell, Tom’s son, is a new member of the board.  Brendan has been very closely aligned with his father at Caldwell Investment Management as well as Urbana Corporation.  Brendan also has worked with exchanges around the world and is extraordinarily knowledgeable about the space.

And last, but certainly not least, Michael Bluestein is a lawyer who founded a firm called Corporate Counsel just north or Toronto.  Michael has been a marvelous supporter of the Canadian Securities Exchange in his practice and he is the chair of our regulatory committee, which oversees the policymaking work of the exchange.  Michael is someone we have known well for quite a while.  We look forward to working together closely, particularly on our new listing rulebook.

PM: Let’s look at the CSE’s plans for 2021. What goals have you set for the team? And what initiatives, both ongoing and new, will the CSE be focusing its time on?

RC: Goal setting in this space is always a little tricky.  We are subject to the whims of the market and even if we think at the beginning of the year that we are going to be focusing a lot of energy in a particular industry sector, we may find that investors decide to support different sectors in the marketplace with their investment and trading.  So, we can’t get too granular in the goals we set for the organization.

Clearly what we are seeing, though, is a significant expansion in trading activity, not just on the CSE but across Canada. Earlier in the year we were seeing roughly a billion shares a day trading across all markets.  And over the last six weeks or so we have gone to 2 billion.  What I can say, as someone who has been around this business for more than 30 years, is that this tends to be the pattern.  Canada will turn over X number of shares, and without warning it goes to 2X.  The interesting thing is that it happens without any real warning, and then it becomes the new baseline.

We had our previous record burst of activity in 2017 and 2018, which was driven by the US cannabis companies that joined the CSE and the extreme level of investment interest in them.  The other markets were not in line with those increases, but this time they are.  Everybody  has seen a doubling in turnover.  Did we see that coming?  Not really.  Volumes were healthy over the summer and we noticed increased retail participation, and that’s true on our exchange and some of the other exchanges catering to early-stage companies.

Obviously, we are going to continue to explore and expand our use of social media platforms and virtual sessions, to get our message out and engage with as many people as we can, whether it is issuers or investors or other stakeholders.  We have learned a lot about what works and what does not work and we’ll apply that knowledge to our programs this year.  It is certainly less expensive than being in an airplane all the time and you can reach out and touch a lot more people this way as well.  It is going to be a permanent part of our programs moving forward and I think that will be the case for almost every industry.

That having been said, as we get later on in the year, I think there are a lot of folks who are going to want to see us face to face so my expectation is that we will be on the road quite a bit from October.

Overall, the picture appears quite robust from a listings perspective.  Certainly, the mining industry is in good shape, as it was our strongest sector in terms of new listings in 2020 by number of individual financings.  By dollar total the cannabis industry is still the champion by a wide measure because you have a number of issuers that raised very large sums of money last year.  We are also seeing more activity in the technology sector, some of it oriented toward health care.  Communications has obviously been a big theme.  And we have also made an impression in the growing psychedelics market.

PM: What other growth opportunities are there for the CSE over the longer term?

RC: We are going to continue to look at different international jurisdictions.  Listing on the CSE is a very cost-effective means for companies to access not just the Canadian public capital markets but the US private placement market as well.  By virtue of being a Canadian reporting issuer, without having to also undergo the pain and expense of becoming a reporting issuer in the United States, it really is one of the great bargains in our world.  We’ve had good success attracting companies from different countries from around the world.  And we’ve seen real interest from different Asian markets over the last six months.  It’s been challenging to do the kind of business development we’d like because we are all locked down.  But I can see as we move out of the pandemic that we’ll begin to capitalize on that interest from Asia.

I’d also highlight Australia, which is obviously a very large mining market.  The Australian miners have always had a lot of respect for the ability of Canada’s public markets to provide financing.  And we’ll be exploring ways to facilitate Australian company access to Canadian public markets through a CSE listing.

PM: Any final thoughts on the year ahead or topics we have not touched on so far?

RC: We are continuing to work on the delivery of a clearing and settlement system for tokenized securities.  I always caution that we are not talking about bitcoin or ether or other cryptocurrencies, but securities which use the smart contracts originally developed by those in the blockchain and cryptocurrency world and applying them to solve problems in the cash equities world.  I have been heartened over the course of the year, as we have attracted a number of partners to work with us on achieving this goal. These organizations are expert in different components of service and have existing customer relationships with issuers and the Canadian dealer community.  We’ll be talking more about this as the year progresses and hope to be in a position to get it into people’s hands later in 2021.

Check out Part 1 of this interview here.