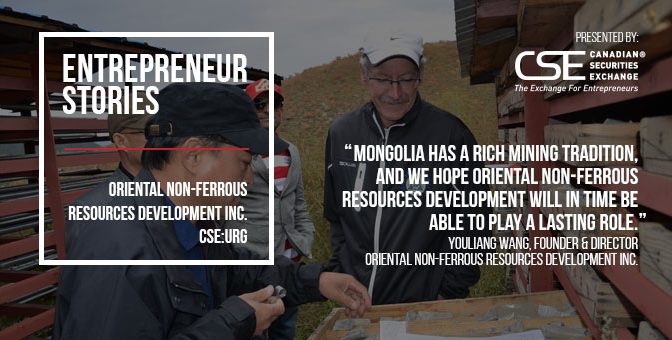 Covering an area larger than Peru yet with a population of just 3 million people, Mongolia is the most sparsely populated country on earth.  It is also a beautiful and fascinating nation, with traditions established before Genghis Khan founded the Mongol Empire in 1206 influencing lifestyles to this day.

While mindful of its rich culture, Mongolia is easing into the modern economy with commercial-scale mining leading the way.  How could it not when minerals comprise some 80% of the country’s exports?

Mongolia’s most famous mine is undeniably Oyu Tolgoi, the copper-gold behemoth operated jointly with the Mongolian government by Rio Tinto (LON:RIO) subsidiary Turquoise Hill Mining since 2013.

But the country is home to other mines as well, such as Centerra Gold (TSX:CG)’s Boroo mine, a historic gold mine whose modern-day output began in March 2004 and continued until September 2012, though with a stoppage of just over a year beginning in November 2010.

Oriental Non-Ferrous Resources Development (CSE:URG) and its leadership team were attracted to the country for the same reasons as other companies – high-quality projects, proximity to Asia and a favourable permitting environment, to name a few.

The driving force behind the company’s strategy and operations, founder and director Youliang Wang, explains that the concept for Oriental Non-Ferrous Resources Development dates back some 20 years to when he was a banker at China Construction Bank, where his responsibilities included overseeing loans to Chinese mining companies.

Attracted by the scale and variety of opportunity in Mongolia, Wang first invested in a dairy business, eventually broadening into other agricultural businesses as complements.

Given his background in mining finance, though, it was only a matter of time until he created a plan to move into this sector.  In 2013, Wang and his team immersed themselves in the Mongolian mining community, working with consultants and local exploration teams to examine various properties.  The result was the company’s current land package, prospective for both industrial and precious metals.

Oriental Non-Ferrous Resources Development’s properties are located in the Bornuur district in the Tӧv Aimag, or Central Province, of Northern Mongolia.  Its package spans roughly 1,050 hectares, comprised mostly of the Kharganii am-1 Molybdenum Property.

“Our licensed area is situated in the North Khentii tectonic belt and we have encountered gold, copper, molybdenum, tungsten and silver on its grounds,” says Wang.  “The projects are located 24km northwest of Centerra Gold’s Boroo deposit and 15km east of their Gatsuurt gold deposit.”

“Our initial phase of exploration drill work has contributed to a database that contains approximately 3,501 drill core samples and 29 trench samples that were assayed for molybdenum,” says Wang. “This includes a current program which encompasses 29 holes for a total of over 11,630m.”

Wang explains that many of the holes have multiple intersections of molybdenum mineralization above 0.05%, with several intervals of between 1m and 2m exceeding 0.5% Mo. The best hole yielded a 3m length averaging 2.413% Mo.

Wang notes that the Mongolian permitting environment is very reasonable, with the various licenses Oriental Non-Ferrous Resources Development holds typically being extendable for up to 30 years.

P&E Mining Consultants of Toronto was recently chosen to complete a NI 43-101 report for the company’s Kharganii am-1 Project, which will reflect results from the current drill program and associated metallurgical test work.  A concurrent evaluation of the preliminary economics of the molybdenum deposit is also planned.

The properties being situated within a recognized gold belt, Oriental Non-Ferrous Resources Development is also gearing up to initiate a property-wide evaluation of potential gold targets.  The work will include mapping, prospecting and IP geophysics.  Expansion of the property is also under consideration.

“The North Khentii gold belt has an extensive history of mining both alluvial placer and bedrock gold deposits,” says Wang.  “After discussions with geologists from P&E, we are looking to evaluate high-potential targets within the property for gold mineralization.”

Wang says Oriental Non-Ferrous Resources Development is also evaluating both merger and acquisition opportunities and possible project procurements, the longer-term objective being to develop a portfolio of Asia-based projects diversified across various mineral types and regions.

Time will tell where these expansion efforts lead, but for the time being there is plenty to be excited about in Mongolia.  The country has only been an internationally accessible mining jurisdiction since the mid-1990s, and if one considers what the industry has been able to accomplish in the last decade between new discoveries and active operators, Mongolia holds its own vis-à-vis many more mature mining jurisdictions in other parts of the world.

“We have long believed in the viability of mining projects in Mongolia, and when the projects in our current portfolio came to our attention, we thought what better way to get involved in the space than to make investments in some of these great projects, and then look to take them public,” Wang concludes.  “Mongolia has a rich mining tradition, and we hope Oriental Non-Ferrous Resources Development will in time be able to play a lasting role.”

This story was originally published at www.proactiveinvestors.com on Feb 28, 2017 and featured in The CSE Quarterly.

Learn more about Oriental Non-Ferrous Resources Development on the CSE website at http://thecse.com/en/listings/mining/oriental-non-ferrous-resources-development-incc.