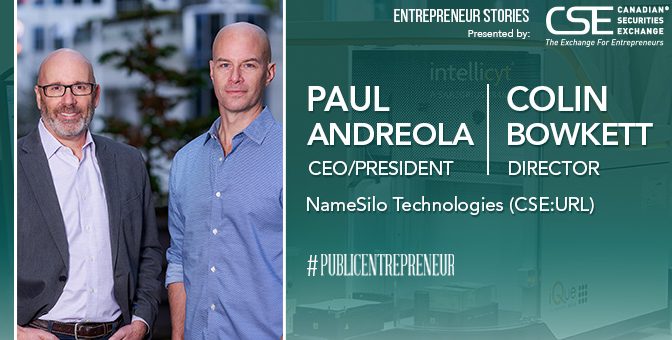 Mention the name Paul Andreola in Canadian financial circles and those in the know require no further explanation, given his outstanding track record as a stock picker in non-resource microcaps. Taking the methodology that has served him so well as a private investor, Andreola has painstakingly created a portfolio of investments in small companies for NameSilo Technologies (CSE:URL) (note: NameSilo Technologies began trading under its current name and symbol on December 6, 2018. The company previously traded as Brisio Innovations).

NameSilo shares have more than doubled in value over the past year and Andreola credits this in part to a shift in strategy that will see the company take larger percentage positions in its portfolio holdings going forward. Diversification that sees everything from drug research to truss manufacturing included in the portfolio is a big help as well.

The other key to delivering strong returns to shareholders is a fascinating private-public arbitrage concept that requires experience and a broad, deep network to achieve.

Andreola shared the NameSilo approach to generating superior investment returns with Public Entrepreneur during a mid-November discussion in Vancouver.

NameSilo Technologies has some similarities to a classic investment fund, but plenty of differences as well. Can you explain the NameSilo concept and business model to get us started?

The company is run by investors first and foremost. We use a model we think is quite rare, especially in the microcap space. We look for companies that are more advanced than pure start-ups. Companies that we think have significantly less risk than the typical business entity that gets listed publicly but with as much, if not more, upside. We are looking for situations that have that perfect risk-reward scenario that allows us to feel comfortable putting in a significant amount of money. We take a private equity model and put it inside a public vehicle.

We are looking for high-growth companies. We want to invest in companies that have proven there is a viable model and, in most cases, viable products and services that they are offering. And we want to catch them just as they are getting that explosive, hockey stick-style growth.

The model itself is something that we have been doing personally for years, and we have now put it into a vehicle such that we can take advantage of the scale that goes with being a public company.

Tell us about the boss. Who is Paul Andreola and what led you to build NameSilo?

I have worn a lot of hats over the many years I have been at this. I used to be a stockbroker and spent roughly 10 years in the investment industry. I have seen a lot of deals and most of them are not good. The key is to try to say “No” as many times as you can and find that one little gem that comes along every now and then.

I’ve also started two technology companies. One we took public and it did extremely well, and then the other one actually did not do so well. And we learned as much from that one as we did from the one that was successful. So, I’ve got the start-up and the go-public experience and that helps us when we look at new opportunities.

Thirdly, I have an investment newsletter and a network of investors who all have the same mentality. We all want to find these little gems that are obscure and undiscovered. And we want to try to bring these companies everything they need to be successful. It’s a model that we have proven works.

My other director is Colin Bowkett. He comes from a much purer venture capital background and has been in the markets for over 10 years. Compared to me he was a lot more involved in the speculative side of the business and is more of a people person than I am. The thing about investing is there are a lot of personalities involved and having someone with good people skills enables you to figure things out that you wouldn’t have been able to without the right skills.

The third key person is Kristaps Ronka. He is an IT specialist who has worked for several tech companies, but his real claim to fame is that he and his partner started a tech company from scratch and took it from zero in sales to a run rate of around $100 million before it got bought out. He took some of the funds from his sale and has invested in a collection of other businesses.

We take a GARP approach – Growth at a Reasonable Price. There are a lot of cases where you find a great company but it is priced for perfection, and that is not what we are looking for. We are trying to find situations where there is a great company at a great price. And we don’t just look at the public markets. We have managed to find several high-growth, low-priced public companies and have done it on the private side, too. That is where it gets really exciting because we think there is a very strong pricing arbitrage where you can find a company that might sell privately for 3 or 4 times earnings and the public comparables trade at 10 or 15 times earnings, so immediately there is a lift just by taking these companies public.

How do you find these companies?

We turn over a lot of rocks and are constantly looking. As far as public companies, we are numbers guys and we read every single SEDAR filing in Canada. There are very few companies we haven’t got at least a cursory understanding of. We have a formula we are looking for and if a company doesn’t meet that formula it gets crossed off.  We literally go through thousands of them – to find even one you have to go through a lot.

The private ones are a little bit harder to find. We have a network of people who know what we are looking for and typically the network brings us private deals to assess. A lot of them are companies not necessarily looking for money, but they may be looking for an exit. Great little businesses, run well, not necessarily needing money, so we don’t have the risk of financing them, but they just want a partial exit or something. We take them public and achieve that partial exit for them.

Let’s look at your portfolio and how a company fits into the greater whole and creates value for shareholders. Perhaps begin with the latest acquisition, which also brought the company a new name.

NameSilo is actually an anomaly. Until now, all of the companies we became involved with, we took no more than a high single-digit percentage ownership position. We’d find companies where in the process of going public we had the opportunity to purchase shares and then when it went public we would get that lift on our 5% or so.

NameSilo is a company we have actually purchased 100% of, though we have carved out a percentage for the management team running it. But here is an opportunity where we think we are going to get 100% of the lift through that private-to-pubic arbitrage. That is likely to be the way we will perform going forward, taking a much larger stake in each company.

NameSilo’s stock price has been doing well of late. It has doubled since the beginning of the year. What is driving that and what feedback do you get from shareholders?

The biggest driver is the biggest part of our portfolio, which is NameSilo. We think it is outstanding. NameSilo is a domain registrar similar to GoDaddy or Tucows, but it is arguably one of the three fastest growing in the world. The company has been able to automate itself to be able to drive prices down to where nobody can compete on price with our core product. We are growing much faster than GoDaddy on a percentage basis.

We think we bought it extremely cheap in comparison to the other publicly listed companies. We trade at a fraction of the metrics they trade at and we are growing anywhere between 80% and 90% organically, whereas GoDaddy is growing at about 15%. What is driving the NameSilo share price, I believe, is that people are beginning to recognize the undervalued nature of our major asset.

Investing involves looking into the future and making certain assumptions. What do you see around the corner in some of the industries your companies are involved in?

For example, one of our investments is a company called ImmunoPrecise. They’re a contract research organization for major pharmaceutical companies. What that means is major pharma companies don’t do a lot of the R&D in house but will contract it out to a company such as ImmunoPrecise. That is a major tailwind that a lot of people don’t recognize but that we are seeing in the numbers. We want to see high growth in the businesses we are investing in, because that is a sign the business is working.

The other major trend to be aware of is the topic of passive versus active investing. The FAANG stocks – Facebook and Amazon and those names – there is a massive amount of money going into opportunities that have to be big enough for institutional funds to participate. The old active investor has given way to investing in ETFs or big funds that mirror the indexes or just buy a basket of the biggest stocks.

I think we will see the pendulum swing back to the active investor who is a good stock picker. In the microcap space, liquidity has dried up and institutions have gone upmarket. In the long run what that does is open up a lot more opportunities for investors like me to go after these great little deals without the competition you would usually see. It also opens up a lot of opportunities for bigger companies to buy the smaller companies on the cheap.

Any words of advice for up and coming entrepreneurs from your years in the business?

The model that we have in Canada in the public markets really is second to none. As entrepreneurs, people should be aware that this tool is there for them. Especially if you have some degree of success. If you have a real business that is generating revenue, and in some cases profits, the ability to take advantage of the model here and some of the valuations you ultimately get, and the options that being public give you, is something entrepreneurs should seriously look at.

This story was originally published at www.proactiveinvestors.com on January 2, 2019 and featured in the Public Entrepreneur magazine. 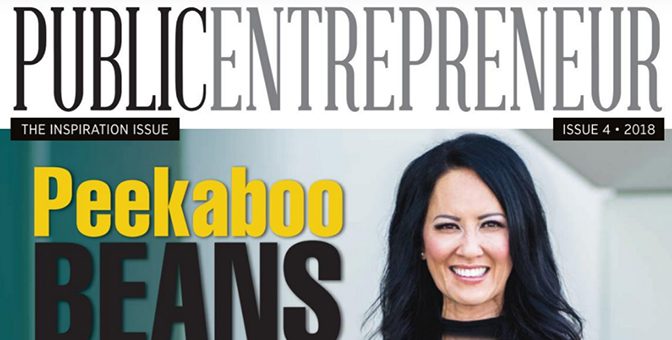