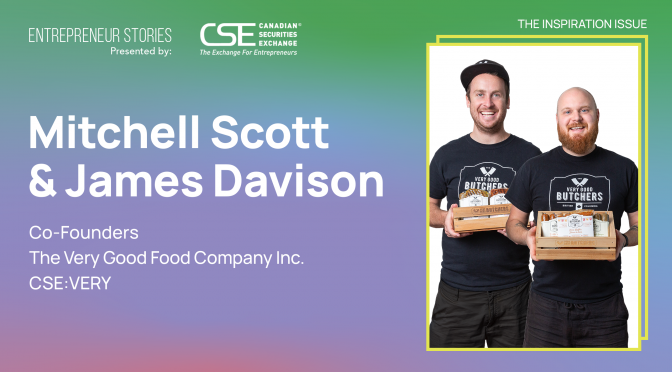 Investors in The Very Good Food Company (CSE:VERY) know a great opportunity when they see one. The stock keeps climbing to new all-time highs, at time of writing sitting some 340% above its debut price in June of this year. The Very Good Food Company has come to market just as plant-based foods are a hot topic, but this is no trend-follower. This is a leader, which the company’s product line (and a taste of some of those products) makes abundantly clear.

Scott spoke to Public Entrepreneur from his office in Victoria about the secrets to The Very Good Food Company’s success.

There have been plant-based meats on the market for many years, but you seem to be stepping it up a notch, with different product formulations and looks, and a wide product range. Walk us through the genesis of the company and its culture.

We got started in the summer of 2016. My business partner, James, was a classically trained French chef from England. He moved to Vancouver and began working in a plant-based restaurant, and that’s when he got turned on to the plant-based movement. He ended up moving to Denman Island, also on the West Coast, and went vegan around the same time.

When he got to Denman he realized there were not really any restaurants, so there was nowhere for him to cook. He decided to get entrepreneurial and start making his own meat alternatives. A lot of the products on the market at the time were over-processed and full of fillers and other ingredients he wasn’t comfortable with. He wanted to make something with great ingredients – beans, vegetables, herbs and spices.

The first two products were veggie burgers and English breakfast sausages. He took them to the local farmers market and sold out in the first hour. That summer, he and his wife spent the week making the products in the kitchen and then going to the market and selling out.

That’s when I got to try the product, at a family barbecue, actually, as we are distantly related. I had grown up vegetarian and eaten a lot of not-so-great veggie burgers over the years, and I was just blown away by the quality. My background was in business development and marketing, and I was ready for something new, so we teamed up.

Talk about the consumer landscape for your products. Vegetarians are obvious customers, but are you also trying to bring in non-vegetarians?

Vegetarians and vegans are our core customers. There traditionally have not been a lot of good vegetarian options, so when people find something they like they stay with it and share it with their friends.

Since day one, we have wanted to appeal to a broader audience, and that was one reason for the butcher shop angle, where you would expect to see an assortment of meats. We want products to be approachable. Not some strange vegan product, but a burger, a sausage, some pepperoni. We try to make the products similar to meat products in look, taste, flavour and texture so they can appeal to a broad range of people.

What are your personal favorites in the product line? Where should someone start if they are new to your brand?

My personal favourite is adzuki bean pepperoni. Our taco stuffer is super popular – it is like a lightly spiced ground round. Those are my two favourites.

As for the broader product range, we have six or seven in grocery stores because we make them on a larger scale, and these are two types of burgers, two types of sausage, the taco stuffer, pepperoni, and we are just launching a hot dog.

In total, we have 15 or so, and the others are smaller runs and available at our shop or online. Those would be ones like steak, ribs and a holiday season item called Stuffed Beast. More labour is required for those, and we haven’t had a chance to scale up yet.

Tell us about your supply chain. How healthy and local are the ingredients that go into your products?

We try to source as locally as possible, so all of our produce is coming from farms on Vancouver Island and BC’s Fraser Valley. For beans, we are going to the Prairies, so about 95% of our inputs are Canadian.

In terms of what’s in the products, it is primarily beans, veggies, herbs and spices, with a bit of wheat flour to bind it all together. Of those veggies, we are looking at onions, beets, celery, mushrooms, leeks – nothing super exotic.

You had strong revenue growth in the most recent quarter and a solid gross margin. A lot of your overall expenses are operating costs rather than product costs. Talk to us about costs and margins going forward.

Operating costs are fairly high because our production process is still quite manual. We used to roll sausages and press burgers by hand, for example, but now we have machines to help with that. Once we move to full-scale production we’ll have a line that outputs 10 or 20 times what a manual line does now.

We are hoping to have larger-scale production up and running in early February. Until then, we’ve got our Victoria production facility, where we’ve upped production to 5,000 kilograms per week, from 2,000 in the summer. The next big production step will cost a few million to get up and running. The big cost is equipment, but we can get that financed and pay it off over a five-year term.

How about three to five years out? Where do you see The Very Good Food Company?

Our major focus in the next one to two years is the North American market. We want to continue rolling out e-commerce and wholesale grocery store supply. And our butcher shop and restaurant we see as a flagship store concept, so perhaps set them up in Montreal, Toronto, Los Angeles – we’ll hopefully make money from them, but they are more brand-based marketing tools.

After North America we want to be in Europe, with a similar concept of setting up a flagship store and then local e-commerce and wholesale. And it would be the Asia Pacific region after that, so Australia and Asia.

Those are some big goals. One senses from your answers that there is still plenty of room for this industry to grow.

This market is really just getting started. It is not just a trend. All of the producers in the industry are running full out. Companies that have been around for 15 or 20 years are still experiencing double-digit or triple-digit growth.

Beyond Meat was the first pure-play meat alternative company to IPO, and we were the second. I think you will see more public company opportunities. But the market is growing at such a rate that there is still tons of upside potential for everyone.

Learn more about The Very Good Food Company
at https://www.verygoodbutchers.com/