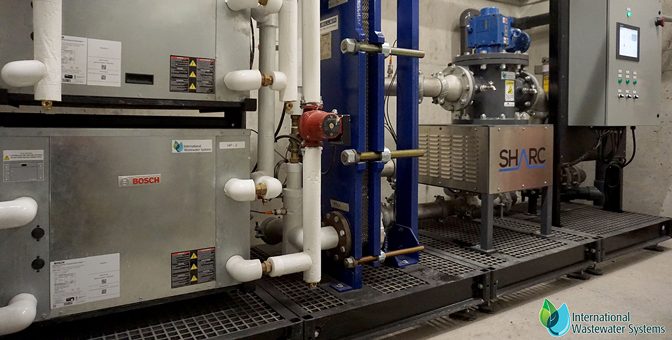 This story was originally published at www.proactiveinvestors.com on February 24, 2016 and featured in The CSE Quarterly.

“Why didn’t I come up with that…it’s so obvious?”  Pretty much all of us have seen a new product or service and wondered why it took so long for someone to finally do something with an opportunity that had been sitting right under everybody’s nose.

Lynn Mueller is one executive who refused to let such an idea get away, founding International Wastewater Systems (CSE:IWS) in 2010 to make a difference for customers and the environment by recycling something most of us discard on a regular basis without even thinking.

Warm water from showers, kitchen sinks and other sources cascades down the drain in huge volumes every second of every day, the energy initially used to heat that water being lost completely, or actually becoming a detriment by reaching our oceans and introducing unneeded heat to them.

International Wastewater Systems, or IWS as the company calls itself for short, recaptures that energy using technology that Mueller, the company’s president, explains is a century old, quickly sending it back up the chain to be used again.  It is a simple concept and it works, with users in Canada, the United States and Europe addressing their energy needs in a responsible way, and saving money at the same time.

The equipment that makes this happen is called the SHARC unit, developed in-house during the company’s first four years.

“I started out as a refrigeration mechanic, spending my early work years doing refrigeration and heat movement,” explains Mueller.  “All I’ve ever known my entire life is how to move heat.

“International Wastewater Systems invented what we call SHARC technology, which is sewage heat recovery specifically designed to recapture a third of the energy used in the world that finds its way down the drain,” he continues.  “We refer to ourselves as the ultimate in renewable energy.  It is the same energy – we just use it one day, re-capture it, and then use it again the next day.”

The company did all of its original SHARC system installations in and around Vancouver so it could access them easily for monitoring and tweaking.  A couple of years ago product refinement had reached the point where Mueller decided that SHARC was ready for prime time.

The reaction has almost been more than the company can handle, with Mueller referring to the last 24 months as a “blur of growth” characterized by interest from all over the world.

It helps that SHARC is eminently scalable, with Mueller explaining that the system can handle anything from a single building to a district energy system.  Not surprisingly, SHARC units are custom-designed for each installation.

An easy way to understand the SHARC technology is to visualize it in stages, the first filtering out waste within the sewage that streams into the unit and returning it to the sewage flow so it can continue on its merry way.  What’s left is water that is clean enough to put through a heat exchanger, which extracts the heat energy for reuse.

“You temporarily intercept the flow, clean it up, use it for your heating needs, and then it goes off to the sewage treatment plant,” says Mueller.  “We’ve just had a thermal effect on it and nothing else.  We have not done any chemical processes or altered it in any way other than recovering the heat from it.”

Which brings us to that vintage technology – the heat pump.  “A heat pump is really just a glorified refrigerator,” explains Mueller.  “If you put warm food or beverages into a refrigerator, a few hours later your food is cold but the back or your refrigerator is warm – that is a heat pump in action, moving heat from the warm product into the refrigeration system and then by means of that heat pump it is rejected outside.”

Within the realm of IWS’s technology, that warmth is most often directed back into a building or used to heat water.

One of the installations of which IWS is most proud can be found in Sechelt, a small city popular with tourists and retirees on British Columbia’s picturesque Sunshine Coast.

“Sechelt built the world’s cleanest and most efficient water treatment plant,” says Mueller.  “The water leaving the Sechelt Water Resource Centre is of a quality such that you can actually drink it.

“The philosophy at the treatment plant was to be completely sustainable.  Energy recovered from the sewage heats and cools the entire building, so it uses no fossil fuels.  The system has worked flawlessly now for two years and people come from all over the world to see it.”

Potential users in Europe needn’t travel quite so far to see the SHARC system in action, as IWS has an office in Leicester.  And there are more international locations to come, as the company follows a philosophy of supporting the communities that welcome its products.

The sustainability part is reflected not only in a commitment to respecting local communities, but in the efficiency of the system as well.  IWS’s equipment is not something developers install just to make themselves feel good.  The units run at what Mueller explains as somewhere between 400% and 500% efficiency, meaning that for every dollar spent operating the system, the owner gets back around $5.00 worth of heat.

With economics like that, it is easy to understand why the business is growing quickly.  Mueller says he foresees orders totaling tens of millions of dollars over the next three years, with cash flow likely turning positive in 12-18 months.  The public listing on the Canadian Securities Exchange in October 2015 was seen as a cost-efficient way to give the company access to the capital that will help fuel its revenue growth.

At the moment, revenue is generated in one of two primary ways, depending on jurisdiction.  In North America and most other markets, units are sold to the user, with IWS also collecting an ongoing revenue stream through maintenance work.

In the UK, however, the company enters power purchase agreements for its installations through the government’s Renewable Heat Incentive.  This program sees the government commit to paying a project owner a rebate for recovered green energy for 20 years.  IWS partnered with British institutional investors for the capital it needed and Mueller says the groups are working together well and should enjoy good returns on investment.

Helping to open additional international markets for IWS going forward is a new product called Piranha.  This is a standardized, self-contained heat pump built specifically for hot water heating that, like the bigger SHARC units, recovers heat from wastewater.  The stand-alone Piranha system is designed for residential buildings of between 50 and 200 units, and given the pace of urban densification worldwide seems like a product tailor made for the times.

“At its core, our message is that we can retrieve energy for you efficiently and without effort on your part, so there is no reason to throw it away,” concludes Mueller.  “As we move to a carbon free economy, we have developers coming to us and saying they want to plan for the future and get off of fossil fuels as much as they can.  We are the vehicle to do that because we can recycle more energy than anybody else and do it for any building in the world.”

Learn more about International Wastewater Systems at www.sewageheatrecovery.com and on the CSE website at: http://thecse.com/en/listings/technology/international-wastewater-systems-inc