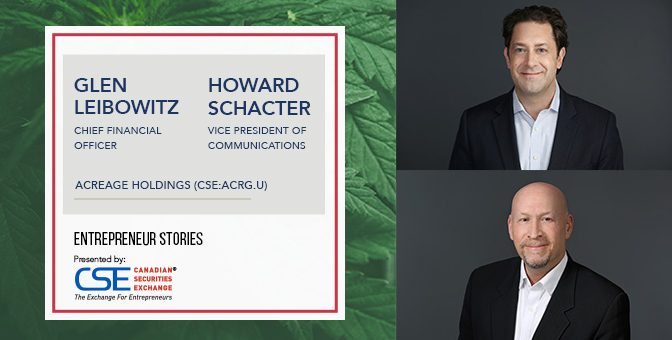 A lot has been written about the game-changing deal between Canopy Growth and Acreage Holdings (CSE:ACRG.U) announced on April 17 of this year. Much of it is complex.

Most observers assume that final consummation of the megadeal is predicated on a single, very specific occurrence: federal legalization of cannabis in the United States. But Acreage Chief Financial Officer Glen Leibowitz and Vice President of Communications Howard Schacter say this actually is not quite the case.

One thing for sure, though, is that once the acquisition of Acreage Holdings by industry giant Canopy Growth Corporation is finalized, it has the potential to cause a sea change in the way companies structure business deals in the cannabis space.

Here are the facts as they stand today.  Canopy and Acreage have entered into an agreement that will grant Canopy the right to acquire 100% of Acreage’s shares at such time that cannabis production and sale becomes federally permissible (remember that term) in the United States.

As part of the transaction, Acreage shareholders will receive an aggregate payment of US$300 million, which works out to approximately US$2.51 – $2.63 per share.  The payment is to be made immediately following the receipt of approval from shareholders of both Acreage and Canopy, plus the Supreme Court of British Columbia.

Later, once the “federally permissible” condition is met, Acreage shareholders would receive 0.5818 of a common share in Canopy for each Acreage share held. Canopy has stated that it intends to waive the requirement when a change in rules policing the New York Stock Exchange and Toronto Stock Exchange would enable the acquisition to occur.

To understand how the deal came about, a bit of background is necessary. Acreage’s roots started in 2011 when Chairman and Chief Executive Officer Kevin Murphy, a Wall Street veteran, began making moves in cannabis with a minority investment in Maine. By 2017, the company, at the time called High Street Capital, was rebranded as Acreage Holdings, welcoming former US Speaker of the House John Boehner to its board. There were several rounds of private raises, including a US$119 million financing that represented the largest in the industry at the time, culminating in a reverse takeover on the Canadian Securities Exchange last year.

Today, the multistate operator has a footprint in 20 states, making it one of the largest cannabis companies in the US. Its April 2019 acquisition of Form Factory, a manufacturer and distributor of virtually any type of ingestible cannabis product, propelled Acreage into the big leagues of the mainstream consumer packaged goods industry for cannabis products. With the acquisition under its belt, Acreage hopes to become the first port of call for traditional CPG companies like Kraft and Mars if they decide to enter the cannabis space.

In that context, it’s easy to see why Canopy saw Acreage as an ideal partner in its US expansion plans. Canopy’s $5 billion deal with Constellation Brands, which manufactures spirits such as Corona Extra, Modelo Especial, Robert Mondavi, Kim Crawford and SVEDKA Vodka, is a clear sign that global CPG companies are already making moves into cannabis.

The Canopy-Acreage deal is about creating a multinational cannabis brand, gaining consumer recognition and customer loyalty in the same way as a company like Constellation has with its product portfolio. According to Leibowitz, Acreage’s main focus prior to combining the entities is to be the number one player in every state and every market that Acreage operates in. Canopy’s intellectual property and flush treasury would certainly make it easier to reach those goals.

“We’re seeing the birth of a global cannabis brand, which doesn’t exist,” says Leibowitz. “Long term, that consumer loyalty and brand recognition is the value of the deal.”

There are clear synergies between Canopy and Acreage, but investors are still trying to wrap their heads around how a multibillion-dollar deal can hinge on US federal permissibility of cannabis.

The truth is there are multiple pathways, or “trigger events,” that could see the final combination of the companies take place.

“The trigger event would spur Canopy’s obligation to complete the acquisition, but they have said they would do it at their discretion if the exchanges indicate that they will approve the deal,” explains Schacter.

That’s not to say that the decision is entirely in Canopy’s hands. If Acreage believes that the trigger event has occurred, it can put the shares to Canopy. “It’s not just an exclusive option for Canopy to pull the trigger,” Leibowitz says.

Many investors have also voiced confusion as to the value of the transaction. At the time the deal was signed, it was valued at nearly US$3.4 billion, a 41.7% premium over the 30-day volume weighted average price of Acreage shares.

The figure only illustrated the value of the deal if it were to close on the day the announcement was made, says Schacter. “Admittedly, our news release could have been more explicit in that regard,” he acknowledges. “The true value of the deal won’t be known until it closes.”

A host of factors that affect the share price of either company could change that valuation by the time the deal is finalized, one of the clarifications that Leibowitz wants investors to understand.

“There’s a lot of confusion around the value that the transaction was agreed to,” he says. “I want to be clear that the shares of Canopy and Acreage do not move in tandem. There could be opportunities where Acreage shares will move up in value and don’t necessarily correlate to Canopy’s share price.”

To calculate the implied value, take the Canopy stock price on the closing date and multiply by 0.5818 to reach the ascribed value of the Canopy shares. Add the approximate $2.51 – $2.63 upfront per-share payment to Acreage shareholders, then multiply that by Acreage’s current outstanding fully diluted shares (currently 117 million fully diluted outstanding shares). The resulting amount will be the implied value of the acquisition.

The value has fluctuated since the April announcement in a possible sign that not all investors are keen on the transaction. According to Leibowitz, that is likely a result of the groundbreaking structure of the deal.

“A lot of the conversations that we have on the institutional side are people asking about the models we used,” says Leibowitz. “They can model a lot of these transactions pretty easily. The problem is this doesn’t have any certainty to it, so they can’t calculate the premium and arbitrage. The result is that institutions will say the risk is too great.”

On the retail side, investors have never seen a transaction structured this way before. “It’s a game changing, innovative deal that has taken time to digest in order to effectively understand the value to both companies,” Schacter explains.

Once the deal is agreed to by Acreage and Canopy shareholders, Acreage becomes Canopy’s exclusive pipeline in the US, ascribing value to the shareholders of both companies.

Whether the trigger is federal legalization, or relaxed restrictions on the New York Stock Exchange, or the passage of a new law, it’s clear that Acreage and Canopy are committed to acting together to create a global cannabis brand.

In the meantime, Acreage maintains the flexibility to conduct further acquisitions through the ability to issue 63 million new shares that will be convertible to the more liquid Canopy stock.  That amounts to approximately “$1.4 billion of dry powder for M&A activity,” says Leibowitz.

Leibowitz says the phones are ringing with calls from companies wanting to be a part of the promise of an Acreage-Canopy merger.

This story was originally published at www.proactiveinvestors.com on June 14, 2019 and featured in the Public Entrepreneur magazine.