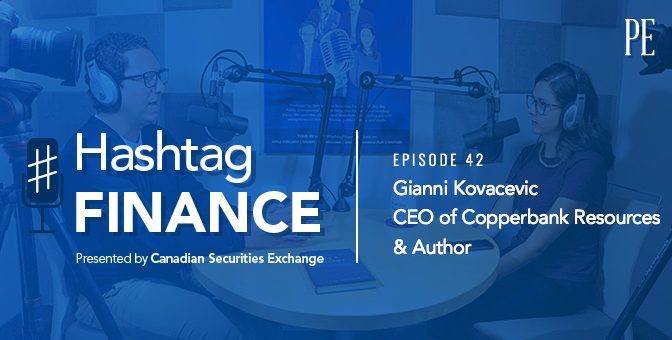 Gianni Kovacevic, CEO of Copperbank Resources (CSE:CBK) and author of My Electrician Drives a Porsche?, joins Grace Pedota to discuss how he became a “modern energy expert” (1:12), how electrification is causing a fundamental shift in the automotive industry (3:27), and why copper is such a vital resource as many industries move towards sustainable, emission-free solutions (10:19). Listen until the end to hear about Gianni’s road trip across America in an electric car, for more information about his book, and for the biggest investing lesson he’s learned. 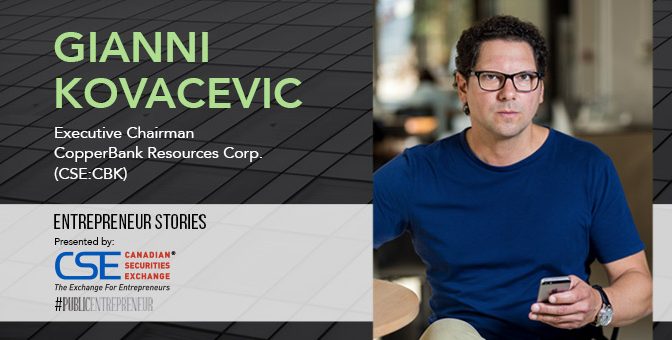 He’s also passionate about the energy industry in a way that is unparalleled. In 2016, he published My Electrician Drives a Porsche and drove across the U.S. to promote it on the world’s first zero-emission book tour.

Public Entrepreneur recently sat down with him to chat about the energy industry and his latest venture, CopperBank Resources Corp. (CSE:CBK), a company that is engaged in the acquisition and development of mineral properties.

Who is Gianni Kovacevic and what drives you to be so passionate about the energy industry?

I’m an investor. Within that, I’m a curious investor, and I want to look at investing in the future and all that it entails. I’ve been captivated by the energy space. Effectively, I look at it like technology now. It’s moving forward at a faster pace than most people will appreciate and recognize.

I’m Croatian. My brother and I have been fascinated by the scientist Nikola Tesla, a Serbian born in Croatia, who invented the modern way in which we create and transfer electricity. That spawned our studies – we both went to BCIT and took electrical studies and I’ve followed it like a Harlequin Romance ever since.

What it taught us was that fairytales at the time are now becoming commercially viable when it comes to the electrification of transportation, solar power, wind power and the integration of that. It will be led by the consumer, in my opinion.

What is the future of batteries, and related to that, and how does that shape the future for companies in the battery metals sub-sector?

When it comes to understanding energy, there are three silos: 1. The generation, or creation, of energy, so the creation of electrical energy. 2. The movement of energy. There are three ways to move energy from point A to point B, you can do it with a pipeline, with a ship or a railroad or you can do it with electrical cables. 3. The utilization of energy and that’s where we can look at batteries.

The lithium-ion battery has gotten a lot of press. It’s good for devices, tools, transportation. When you get to the larger, commercial-scale batteries, you’re talking about vanadium-redox or iron-salt batteries. They’re huge – the size of a building – with very simple and abundant ingredients.

So what’s the glue of every system I just went through? Copper. Electricity demands copper.

You are executive chairman of CopperBank.  Tell us about that company and what excites you about its future.

CopperBank is a unique company. It’s a company built by investors, for investors. We appreciate that the future of energy will be copper. We look at investing in junior mining as the highest of high-risk industries.

Our strategy is to acquire projects that have had a significant amount of capital already invested. When the copper price is low, they are un-economic, when the copper price rises, there’s optionality. Our portfolio has growth, optionality and development potential. We can enhance the value – even in a lower-priced copper environment – to offer investors not just the optionality play, but also accretive growth.

We specifically like copper because as a commodity, it will have strong CAGR demand growth. Unlike the oil and gas industry, copper mining has a window where in the next three to four years we have no major copper mines coming online. That’s big news.

You label yourself a realistic environmentalist. What does that mean?

It’s recognizing that about two billion people in the world don’t live like we do. Eventually, they will have access to running water and electricity. There’s nothing that can prevent that. It’s how we do it in the most proactive way possible. All of these things will be led by the consumer. As much as you want to adjust or pivot the behaviour of people, you can’t do this.

You have to look at the per capita usage of commodities. We currently have 7.5 billion people in the world and we’re probably going to climb to about 9 billion. As these developing nations become more developed, the trend is (and we’ve seen this many times) that birth rates fall. So eventually we will go into decline, but that’s an issue for 2050 and beyond. When you look at the per capita consumption of commodities in the next 10, 20, 30 years that’s where I think – as an investor – there are going to be winners and there are going to be losers.

As we pivot to a low-carbon society, things like thermal coal and crude oil will no longer be growth businesses. We’ll see other commodities become the blue ribbon champions – things like copper because it will continue to grow. We will pivot. That amplitude will increase.

What commodity investment opportunities can you not ignore today?

What Tesla has done with its supercharger network. Effectively, they have disrupted the entire incumbent energy system. You can now drive an electric car anywhere in the developed world, due to their super charger network, and it only took Tesla about three years to achieve that.  Think of the gravity of what they have developed in a very short time.  Royal Dutch Shell by comparison, is a $300 billion company that sells 6 million barrels of oil every day through their 44,000 forecourts. Shell is an energy distribution business and good part of their market cap is attributed to selling transportation fuels. That is no longer a growth business.

What have I missed? What else should we have talked about?

The consumer. The consumer will eventually guide the way. The gentrification, urbanization and behaviour of the millennial generation is profoundly different than the generations before. Where is the largest millennial population in the world? It’s in China. There are 415 million millennials and over 100 million have graduated from university. Those educated, urban Chinese want no part of factory jobs anymore. The European/American millennial is saying they don’t want to live in the suburbs of cities anymore. They are more than happy to live in the gentrified area of Kansas City in a condo, and they don’t have a car nor do they want one — they don’t even have a drivers licence, so they are never going to be the customer of Big Auto or Big Oil.

So if one aggregates any 100 of these people. Many don’t have a drivers licence, and if they do it’s for something like a car sharing service like Car2Go. They don’t want ownership, they want access. Or, they will use a service like Uber. So how does this reverberate into what we’re talking about? If we aggregate 30 or 40 of these young people, they require one car, car-sharing, or an uber driver.

When you look at the consumer, guess what? They all used to buy a car. No longer. These types of consumers, that count in the hundreds of millions, are never going to be the future customer of VW, GM or Toyota. If the Big 3 automakers each sell around 10 million cars a year, I will suggest to you that in the future, their car sales will stop climbing. And I believe car sales in general will actually start to fall. Additionally, a good portion of those cars become more fuel efficient and for professional drivers increasingly so they will buy electric. It’s all about cost, not price – the total cost of ownership, not to mention the governmental pressures that are forcing industry to provide zero emission transportation.

We’ll see technology companies getting in the game: Tesla, Apple, Dyson, you name it. There’s a cool factor, green factor, price factor. It’s going to disrupt the whole business model. It’s all been turned on its head. And then you look at one other thing.

I also think it’s always important to think about the Ernest Hemingway quote when you think about car companies: “How’d you go bankrupt? Two ways. Gradually, then suddenly.”

This story was originally published at www.proactiveinvestors.com on September 8, 2018 and featured in The Public Entrepreneur magazine.

Learn more about Copperbank Resources Corp. at http://copperbankcorp.com and on the CSE website at https://thecse.com/en/listings/mining/copperbank-resources-corp.