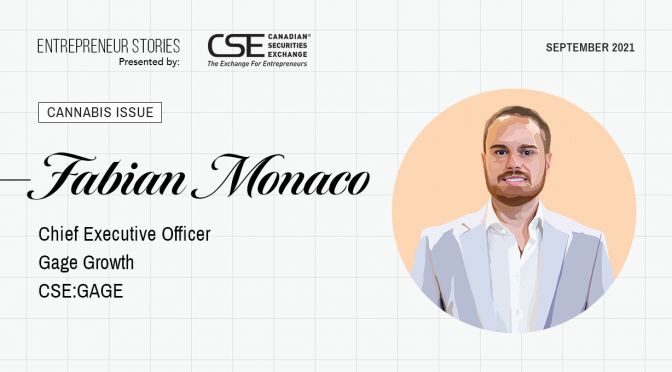 When it comes to cannabis in the state of Michigan, Gage Growth (CSE:GAGE) is the name an increasing number of consumers are turning to. Still a young company, having been in operation for just over 18 months, Gage has nonetheless amassed one of the largest asset portfolios in the state. Experience at the leadership level is key to this success.

Gage’s Chief Executive Officer, Fabian Monaco, is a former lawyer and investment banker who was actively involved in the evolution of the cannabis industry. He was a key member of the team that transacted the first cannabis acquisition, Tweed (now known as Canopy Growth)’s purchase of Bedrocan, and also the first-ever cannabis IPO. Also on the team is cannabis impresario Bruce Linton, who serves as Chairman. Another big name is TerrAscend’s Executive Chairman Jason Wild, who has a large stake in the company.

What is it about Gage that attracts some of the most successful executives in the cannabis industry? For one, Gage is on track to be Michigan’s number one operator by the end of 2021, with 14 facilities either in operation or planned. Its first set of financial statements as a public company showed a big quarter-over-quarter jump in revenue, and a corresponding increase in its profit margin.

Clearly, the decision to start things off in Michigan was a good one.

“One of our founders is from Michigan and the other founder has a strong connection to Michigan through family,” says Monaco. “The biggest reason we chose the state, though, is that it had the second-largest medical cardholder system behind California for many years. Their caregiver program was introduced in 2008, and thanks to that, individuals have been going to dispensaries for over a decade.”

Monaco goes on to explain that close to 75% of the population in Michigan is of age to consume, and that after December 1, 2019, which was the first day of adult-use sales in the state, cannabis commerce skyrocketed. Michigan was outside the top 10 states by revenue at the time, but quickly vaulted to sixth, just behind Illinois. Today, it surpasses Illinois consistently and ranks third.

“It’s been playing out pretty much as we thought it would,” says Monaco.

In a market that size, there is bound to be healthy competition. But Gage has established some important points of differentiation and leverages them to the fullest.

“We really focus on every part of the value chain of the business, from seed to smoke,” says Monaco. “We’re constantly hunting, looking for new cultivars to bring to the table for patients and for consumers. A lot of producers out there – especially some of the publicly traded ones – don’t really grow a lot of varieties, and we pride ourselves on having 40, 50, sometimes even 60 different flavours within our retail locations for people to choose from.”

Monaco says that post-production processes are just as important, and that Gage hang-dries its product, trims it, and packages it. “We have this fun, bright, engaging packaging as well for our flower that people enjoy, and we manage most sales through our own retail channels.“

In addition to having identified a prime jurisdiction in which to operate, Gage also knows who it’s targeting to buy its products.

“In general, we’re going after the former medical user – a refined consumer, someone who has been consuming the product for many, many years,” Monaco explains. “We have a really wide variety of customers.”

The Gage business strategy calls for vertical integration and establishing operations strongly in a single state before taking its proven model and applying it in other states.

“We’re going to focus on one market for the better part of 2021, although we do anticipate doing something outside of Michigan near the end of the year,” Monaco says. “We’re trying to follow that Trulieve (Trulieve Cannabis; CSE:TRUL) model where you execute really well in one state and use that as a springboard to enter other states. Once we feel comfortable with where we’re at, especially as we approach the end of the year, you’ll see us branch out into other states.”

With expansion seemingly just around the corner, the question of where Gage will decide to go next is an obvious one. Monaco believes there is “phenomenal” opportunity throughout the United States and his team has already assessed several states this year. He says there is a lot to like. Plans call for focusing on some of the larger markets with Gage’s first few acquisitions. Massachusetts, Illinois, Ohio, Maryland, California and Pennsylvania are all in the running.

“You’ll probably see us make a move into one of the larger states pretty soon,” says Monaco.

Looking out over the next two or three years, Monaco says Gage is strongly positioned to take advantage of a wide range of opportunities that present themselves as the industry evolves.

“We have a solid cash balance to execute our plans in Michigan and didn’t really take on any harsh payment obligations, in terms of sale leasebacks or debt, over the past couple of years,” Monaco explains. “Now we have the opportunity to tap into some of the lower cost of capital opportunities that cannabis companies are seeing these days. Because our cultivation assets are unencumbered, and we own our retail locations, it really affords us the opportunity to go after some debt to fuel growth without having to dilute shareholders.”

From an earnings perspective, Monaco believes Gage can both increase revenue and expand margins rapidly, because Gage products so frequently sell out.

As for the higher goals, Gage is probably not all that far from achieving some of them already, though the walk before you run mindset remains firmly in place.

“Personally, I’d love to be number one in Michigan, our home base, and then a top player in two or three other states. I think it’s important to remain focused in Michigan before we branch out. We’ll look to be one of the top three in each respective state we go to within the next 24 to 36 months.”