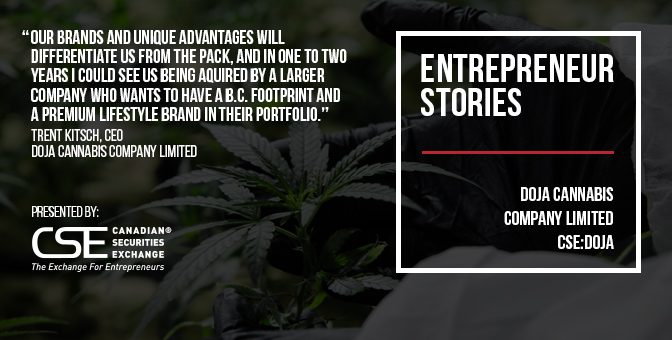 If there is one thing that Trent Kitsch ingrained in himself while building SAXX Underwear into a multi-million-dollar company, it was the value of a brand.

SAXX entered the men’s underwear market with an innovative line of undergarments sold online at higher than average prices and margins.  The premium quality appealed to plenty of men who were willing to pay a little extra to take care of their bodies, with clothing they felt was made with more care and attention than they could find elsewhere.

It is precisely this approach that Kitsch and his team at DOJA Cannabis Co. (CSE:DOJA) intend to follow in building their newest venture: a collection of cannabis and lifestyle products created with  meticulous care.

“Our background is building brands in the fashion and wine worlds,” says the DOJA CEO, who founded not only SAXX Underwear but also award-winning Kitsch Wines.

“DOJA is a brand built around the uncompromising quality of its product.  We do things differently than most of our peers in how we cultivate, hand-trim and cure the cannabis we grow.”

Kitsch explains that hand-trimming retains the look of the flower better than the more popular approach of machine-trimming, while keeping more of the terpenoids and other desirable components machines tend to rustle off.  Rather than removing buds from plants the moment harvesting begins, DOJA hang-dries and cures its product on the stalk.  “You get a better finish that way,” says Kitsch.  “It brings out superior flavors, trichomes and aromas.”

DOJA is headquartered in British Columbia’s picturesque Okanagan Valley.  With 2mln visitors that come to the region each year, the company plans on leveraging the vibrant tourism market to build a far-reaching brand.

The company also believes it will soon have the opportunity to show the rest of Canada the difference its artisanal approach makes.

DOJA received its license to cultivate under Canada’s ACMPR (Access to Cannabis for Medical Purposes Regulations) framework on June 16 of this year.

Soon after the first harvests, a request to Health Canada for a Pre-Sales License Inspection was submitted.  The inspection is the final step ahead of the government issuing DOJA a Sales License under the ACMPR.

With license in hand, DOJA’s primary distribution channel would be online sales direct to the customer.

“Channel two will depend on how the provincial governments announce their planned sales structures,” says Kitsch, alluding to the expected legalization of cannabis in 2018.  “We are hoping some of the provinces see opportunities similar to those in the wine industry or agriculture tourism and that some of those channels open up to us.”

DOJA is planning for its products to be very popular, having already invested in a second growing facility that will expand its overall production capacity by more than 700% to just over 5,000kg of dried cannabis per year.  The new 22,580 sq. ft. Future Lab facility, located close to the Kelowna International Airport and the University of British Columbia’s Okanagan Campus, will be home to DOJA’s research into new and unique cannabis strains, processing, as well as exploration of the edible and oil extract markets.

The proximity of the Future Lab to the airport will not only reduce both cost and time required for delivery but the 60,000 travelers who traverse the road in front of the facility each day will be exposed to the DOJA brand on their commute.  Estimates around permitting and construction time have DOJA intending to open the Future Lab in the summer of 2018.

There is one other DOJA initiative helping to create awareness around the brand and the various aspects of cannabis. The DOJA Culture Café in downtown Kelowna will act as a hub for cannabis information within the community.  Here, customers can have a coffee or a meal, while also learning how to access and use cannabis safely, depending on their particular needs.

DOJA, whose shares began trading on the CSE on August 9 of this year, is well capitalized to execute on the first phase build-out of the Future Lab.  Plans also call for borrowing against their newly acquired facility to further bolster the company’s working capital position.

When asked about the outlook for DOJA, Kitsch responded, “The sky is the limit.  Our brands and unique advantages will differentiate us from the pack, and in one to three years I could see us being acquired by a larger company who wants to have a B.C. footprint and a premium lifestyle brand in their portfolio.”

Near term, though, Kitsch believes the investment community would do well to keep some potential share price catalysts in mind.

“Once we receive our sales license I would say we’d be quite undervalued at our current share price and there would be a strong investment thesis for DOJA on a relative valuation basis,” says Kitsch.  “Ahead of legalization, I think positive sentiment will continue to pick up and an increasing number of people will start to see cannabis as a viable investment opportunity.”

This story was originally published at www.proactiveinvestors.com on December 6, 2017 and featured in The CSE Quarterly.

Learn more about DOJA Cannabis Company Limited at https://doja.life/ and on the CSE website at http://thecse.com/en/listings/life-sciences/doja-cannabis-company-limited.