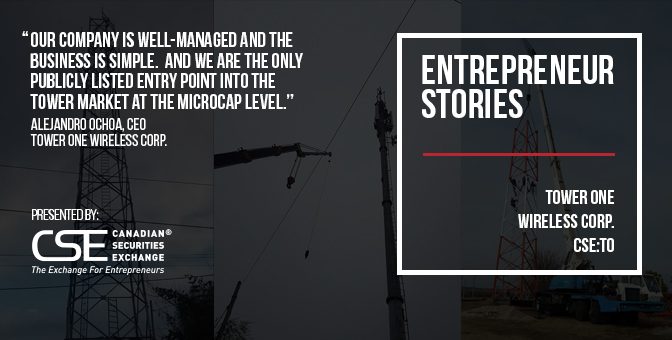 Often in the investment world, a long-term business trend is easy to identify, but finding the right stock to buy to take advantage of that trend is anything but.  Fortunately, the choice is simple for microcap investors looking to hitch a ride on the rapidly expanding need for cellular network capacity by owning shares in a cellular tower company, as there is only one such stock in North America: Tower One Wireless (CNSX:TO).

Fortunately, too, the basics of the business are easy to understand.  In many regions, mobile network operators don’t own the towers to which their antennas are fixed, but rather lease space on them.  This approach essentially enables a carrier to share tower costs with other carriers serving the same area.

For a tower company, then, owing the structure that wireless carriers need today, next year and into the foreseeable future can be a stable, and lucrative, proposition.

“What makes this business interesting is that a tower costs between $50,000 and $70,000 to erect, but the monthly lease payments come in at $1,000 to $1,500, and that is just for one mobile network operator,” explains Alejandro Ochoa, Tower One Wireless Chief Executive Officer.  “We sign 10-year lease contracts, with a 10-year option, but companies in the tower sector are valued highly because in essence use of the towers is perpetual.  And if we add a second or third carrier to use the tower, there is no marginal cost to us.”

Reflecting the Colombian-born Ochoa’s 18 years of investment banking experience in Latin America, Tower One Wireless is focusing its early building efforts in Argentina and Colombia, with Argentina expected to account for about 80% of activity.

“Argentina went through some challenging times, but now the country has elected a new president and is back in business,” Ochoa says.  “There will be demand for 10,000 new towers in Argentina.”

Ochoa tells an impressive story of competing with a large pool of rivals for the Argentine business before winning a spot on a shortlist of 15 companies, and finally being among the four companies awarded the right to build towers.  “We all got awarded the same number of towers, which is 100 to begin with,” he says.

So far, the company has 20 towers up, and anticipates having the first 100 hundred built sometime around the end of 2017.  The early exercise of warrants combined with a $5mln credit line will see the company through that planned construction.

Key to understanding the risk side of the equation is that Tower One Wireless never builds a tower hoping that a carrier will need it.  “We don’t build towers on a spec basis, but rather on a build-to-suit basis,” Ochoa emphasizes.  “Every tower I build has a guaranteed tenant.  My relationship with other carriers is my chance to add a second or third carrier to that tower.”

Once a site is agreed and permitted, construction takes 60-120 days, and some 30 days later payments begin to come in from the first carrier on the tower.  It is thus an easy business to model, and Ochoa’s model suggests very good returns indeed.

“With 100 towers we should have an EBITDA margin around 72%,” Ochoa says, adding that the company won’t see everyday expenses increase as it expands its tower pool further.  “The majority of the work is outsourced, so I can move from 100 towers to 500 towers and manage it with the same 15-person team I have today.”

Ochoa describes his team of accountants and other professionals as hailing from major wireless companies and tower builders, including a legal unit entirely from telecommunications giant Telefonica.

Ochoa has some interesting comments when asked why he chose to list the company on the public markets.  “When you sit across from the wireless carriers and they ask what makes you better than your 15 competitors with many times the capital you have, it is that I am not structured to sell my towers back to American Tower (NYSE:AMT).  Every other company out there is modeled to build their towers and sell them as their natural exit.  By being public, my investors have the embedded option of getting in and out of the company as they please.”

He also talks about the dynamics of capital in South America, where among his banking achievements is leading the team that listed Facebook (NASDAQ:FB) on Colombia’s stock exchange.  Institutional investors in Colombia and other Latin American countries must observe foreign investment limits dictating that a substantial portion of any equity allocation ends up in domestic stocks.  In some cases, this means a fund has fewer than 100 issuers to choose from.

Ochoa would one day like to provide them an additional choice.

“Canada has been very proactive in Latin America and is a market where investors understand the region through mining and oil and gas involvement,” Ochoa states.  “The potential to access capital by listing in another market is also a reason we decided to go public.”

The company Ochoa mentions absorbing other networks, American Tower, is listed on the New York Stock Exchange and sports a market capitalization of some US$60bln.  In 2017, it has outperformed the S&P 500 average at a triple-digit pace.

Putting Tower One Wireless and its C$13mln market cap next to American Tower makes for a lopsided comparison to be sure, but it illustrates the potential for value expansion as the former’s tower network builds out.  It also shows that demand for towers is nothing if not healthy.

“I think looking at our company today makes sense because with the 100 towers we should finish over the next six months we’ll have positive operating cash flow,” Ochoa concludes.  “On a discounted cash flow basis, every dollar you invest in a tower is worth three dollars the day you finish building.  Our company is well-managed and the business is simple.  And we are the only publicly listed entry point into the tower market at the microcap level.”

This story was originally published at www.proactiveinvestors.com on August 31, 2017 and featured in The CSE Quarterly.

Learn more about Tower One Wireless at http://www.toweronewireless.com// and on the CSE website at http://thecse.com/en/listings/technology/tower-one-wireless-corp.