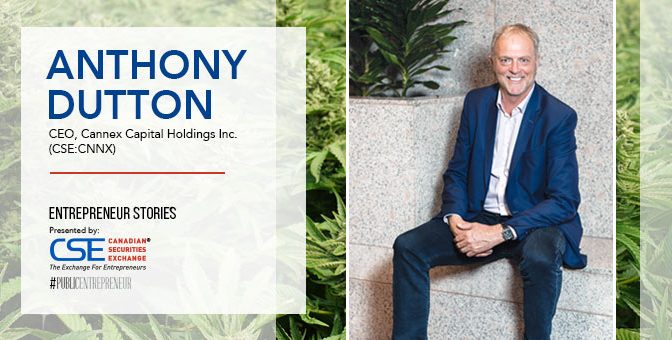 With hundreds of cannabis companies popping up over the past few years, it is perhaps unsurprising to see some consolidation in what, right now, is a very hot sector.

Cannabis – or weed or pot or whatever you want to call it – was, for a long time, looked down upon by many members of society who thought of it as a drug for slackers and spotty teenagers.

That image has certainly started to change as an increasing bank of research suggests cannabis – or more specifically the stuff in it – has a number of positive uses, including as a treatment for things like stress and chronic pain.

Lots of companies have emerged to try to get a piece of this lucrative pie – some analysts think it will be worth US$180 billion within just a few decades – which has created a very fragmented market made up of small firms which don’t always have the experience or the resources to thrive.

That’s where Cannex Capital Group (CSE:CNNX) comes in. The company joined the Canadian Securities Exchange in March, raising US$48 million from investors, including some “blue-chip institutions”, in the process.

Cannex accelerates business growth for small, revenue-generating companies by acquiring them and giving them the support, both financially and managerially, to grow into sustainable, large-scale businesses.

“There are lots of companies in the cannabis sector that are just starting off and many of them are going to fail because they don’t know how to operate a business at scale,” says Chief Executive Officer Anthony Dutton.

“We’ve already proven that we know how to do that, we’ve been successful at that which means we’re going to be successful at it going forward.”

The ‘we’ Dutton refers to is himself and his two main operating partners from Washington State; Cannex Chief Operating Officer and Director Leo Gontmakher and Director Jerry Derevyanny, who is also Cannex’s Executive Vice President of Corporate Development.

Having worked in the corporate finance business for the better part of 25 years, Dutton brings solid financial experience to the operation, but as he openly admits, wherever he has been he has always had a solid operating team – in this case Gontmakher and Derevyanny.

The duo formed the top brass at BrightLeaf, a cannabis holding company which was acquired by Cannex for US$36 million as part of Cannex’s initial public offering in March and is the firm’s foundation asset.

If the structure sounds a little weird, don’t be alarmed. As Dutton explains: “The reason we’ve done it this way is for licensing requirements. There’s nothing nefarious, it’s just the way the deal had to be structured to follow Washington law to the letter.”

NWCS has a couple of manufacturing facilities where it grows “premium” cannabis, some of which it uses for its own derivative products (more on those later) and the rest it sells on to retailers under the ‘Private Reserve,’ ‘Legends,’ and ‘Funky Monkey’ brand names.

While NWCS is the largest cultivator in Washington, it also purchases significant quantities of trim and full flower cannabis from third-party growers, which, along with some of its own trim, it extracts and processes into two types of extract: tetrahydrocannabinol (THC), which is the active substance to create the “high” feeling of marijuana, and cannabidiol (CBD) distillate.

“We [then] refine it and infuse it into what are called derivative products – so everything from creams to vape pens to chocolates to candies,” says Dutton.

That’s the main arm of NWCS’s operations: extracting the oils from the plant and then using it to create a range of infused products.

NWCS has a host of brands including Magic Kitchen (edibles) and Evergreen (vaping cartridges), in addition to its aforementioned cannabis flower labels.

“We’re very focused on quality, so we have to focus on brand; brands are very important,” said Dutton.

“There’s a reason why people buy Coca-Cola and not some generic cola. Ultimately in the cannabis business, brands are going to be the dominant element of value and we want to make sure we own, manufacture, and distribute some of the best brands.”

It is perhaps no surprise, then, that the second company to join the Cannex stable – Jetty Extracts, which was acquired in April for US$22.5 million – is also home to some popular brands in California that have a loyal following.

Like BrightLeaf, Jetty, which specializes in extracts and vaping products, also boasts a strong management team who aren’t newbies to this nascent industry. As Dutton highlights, “that’s the kind of leadership we’re interested in.”

Jetty is significant because it takes Cannex into the Californian market – comfortably the biggest in the US. By 2020, it is estimated that the state will be raking in more than US$1 billion a year in cannabis taxes alone.

That isn’t enough to satisfy the ambitious Dutton though, who has grand plans to take Cannex across the United States and around the globe in the not-too-distant future.

“We’re already in two states and by the end of this year I want to be in two more US states and one foreign country,” he proclaims.

Acquisitions in the booming cannabis industry are unlikely to come cheap, but Dutton isn’t too concerned about this for now. Cannex has US$15 million in the bank and is already cash-generative, so he says there is no need to raise money in the immediate future.

He is acutely aware that at some point, though, he will have to go back to the markets to fund the kind of rapid growth he wants, but he doesn’t expect it will be a challenge to find people willing to back him with their cash.

“The thing that has really impressed upon me in the past couple of months is that investors now want to invest in this sector. They don’t want to start investing in a company that might start generating revenue next year [though], they want a company that’s doing it now. So, for that reason, we’re getting a huge amount of interest.”

Learn more about Cannex Capital Holdings Inc.at http://www.cannexcapital.com/ and on the CSE website at http://thecse.com/en/listings/life-sciences/cannex-capital-holdings-inc.