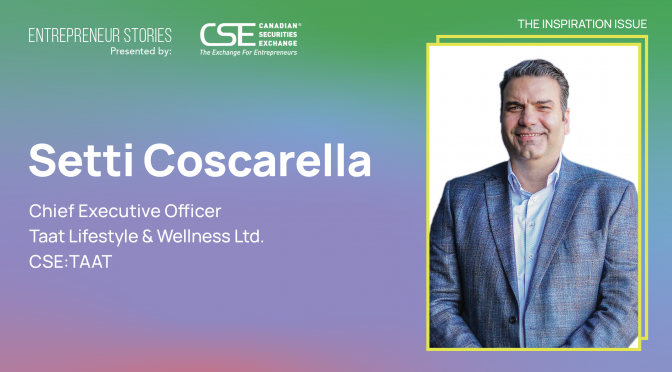 The world of smoking has undergone quite a transformation over the past couple of decades, with cigarettes, cigars and pipes giving partial way to vaping and other next-generation products that more closely align with positive health and lifestyle values.

Few people are positioned better than Setti Coscarella to understand this change and assess whether it is here to stay. So firm is his belief in the segment’s potential that he left cigarette industry titan Philip Morris International (PMI) earlier this year to join young start-up Taat Lifestyle & Wellness (CSE:TAAT) as Chief Executive Officer.

Coscarella was a top strategist for reduced-risk products (RRPs) at the tobacco giant, where his insight led to initiatives that collectively yielded a fivefold increase in RRP leads and purchases.

Taat is focused on hemp-based products, so it should come as no surprise that the group’s Beyond Tobacco cigarettes feature CBD and CBG, both of which are known to provide a wide range of health benefits. The cigarettes contain no tobacco or nicotine, making them ideal as a tobacco replacement or cessation tool.

Public Entrepreneur caught up with Taat’s new boss a few months into the job to find out more. The first question was obvious.

You have just moved from the world’s biggest tobacco company to a start-up. Was this a big leap of faith or a no-brainer?

In a lot of ways, this might be considered a leap of faith, as there were the combined risks of giving up the stability and prestige of working at PMI and replacing that role with a position at a brand new company.

If one’s modus operandi is to just collect a salary and grow within the parameters of a corporate environment, then a move like this would definitely be a leap of faith. I don’t feel that way about it, though, and there are two reasons.

The first is that I see greater potential in Taat as an alternative to traditional cigarettes than I do in any of the alternatives brought to market by Big Tobacco. PMI has spent US$7.2 billion producing smoke-free products, but how much market share has that earned them? It’s then arguably a leap of faith to stay on the Big Tobacco side, since it assumes their alternatives will become and remain profitable.

That brings us to the second reason, which is that a leap of faith is very different from a calculated risk. As an entrepreneur and investment banker by trade, calculated risks are something I’m very familiar with. When you take smaller risks, you position yourself for smaller rewards, and while there’s nothing wrong with that, I’ve become very comfortable taking educated and balanced risks when making business decisions.

What is the advantage of Taat’s Beyond Tobacco cigarettes over other non-nicotine products?

I love this question because it highlights an interesting discrepancy in the category of alternative products to tobacco cigarettes. Tobacco-free products such as gums, patches, lozenges and vapes all have two things in common. The first is that they generally contain nicotine, and the second is that they’re in a completely different format to what a tobacco smoker is conditioned to using.

I think most people can understand it doesn’t make sense to try to leave nicotine behind by continuing nicotine intake using a different method. As for the format, it matters far more than you think. If nicotine was the only thing smokers craved, then things like gums and patches would work much better. The fact that smokers frequently abandon these alternatives to return to tobacco cigarettes suggests they crave the sensory and motor elements of smoking, which none of those alternatives can provide.

Taat is built around an objective of mimicking those elements: the stick format, tobacco-like smell and taste, the crackling sound from combustion and the ability to flick ashes off the stick as the product burns. You can’t do that with a vape device, and you certainly can’t do that with gum or a patch.

Part of that is the patent-pending refinement technique we use for the Beyond Tobacco base material, which creates a taste and smell resembling tobacco. While others sell difference, we sell similarity, and for a transition such as giving up tobacco, similarity is priceless.

You are targeting the launch of Beyond Tobacco cigarettes in the fourth quarter of 2020. How wide will the launch be?

We’ll be launching in the state of Ohio, which puts us into a market of about 11.7 million people, with 22.5% of Ohio adults being cigarette smokers, based on 2016 data.

We are not concentrating on any particular part of Ohio. The big three cities of Cincinnati, Columbus and Cleveland are spread out geographically, which will allow us to examine regional trends during the launch, to better shape our expansion strategies. Our near-term intent is to expand our footprint outward to other states and organically build traction that way.

Does the company have international ambitions?

Most definitely. And this isn’t just because other countries represent more smokers who might be interested in switching to Taat. It’s also because there are unique opportunities in international markets. For example, not many people know how expensive cigarettes are in Australia. Try nearly $50 per pack.

We also mentioned in October how the recent US$5 million private placement led by a prominent Hong Kong financier could help to expedite our entry into Asian markets.

But our current focus is on maximizing our launch in Ohio, as I believe that will build far more sustainable momentum than moving to expand internationally right away.

Can you give us an idea of the size of the market the company is aiming at?

Globally, about 1.3 billion people use tobacco, according to the World Health Organization. In 2018, the tobacco market at a worldwide level was valued at approximately US$814 billion.

Naturally, not every tobacco user necessarily wants to switch to a nicotine-free and tobacco-free product such as Taat, but there are enough tobacco smokers who have had enough of nicotine and want or have attempted to quit. One figure I believe reflects this in the United States is 2018 data from the CDC (Centers for Disease Control and Prevention) that says 55.1% of adult smokers had attempted to quit in the past year, though only 7.5% succeeded.

Therefore, if I had to answer this question in one sentence: hundreds of millions of people, and hundreds of billions of dollars.

What can investors expect from Taat in the future?

Putting myself in the investor’s shoes for a moment, a start-up in the tobacco industry offering an analogue product such as Taat should present a clearly defined plan for commercializing it in a way that makes it a credible competitor to incumbent tobacco products. Further, I would expect visibility into how Taat is made and what the supply chain is like. Finally, I would expect transparency regarding the company’s progress, whether good or bad, both during the launch phase as well as during any expansion.